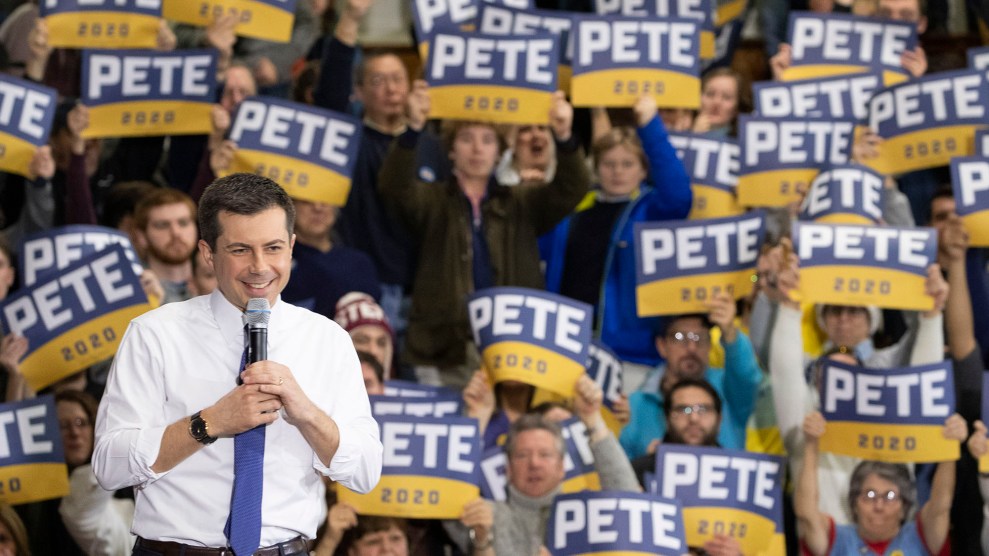 On Saturday at a town hall in Keene, New Hampshire, Rep. Annie Kuster* pulled a question out of a fishbowl and began to read it aloud to Pete Buttigieg. “Alright, Pete, a classic New Hampshire question,” she said, adding that it was “important to all of us even if Washington have stopped paying attention.”

The attendee wanted to know Buttigieg’s thoughts on “the deficit.”

“I think the time has come for my party to get a lot more comfortable talking about the deficit,” Buttigieg said. “Because right now we got a president who comes from a party that used to talk a lot about fiscal responsibility, with a trillion-dollar deficit, and no plan in sight for what to do about it.”

“And yes,” he continued, “this should concern progressives, who are not in the habit of talking or worrying too much about the debt.” Buttigieg argued that the growing deficit would “start crowding out investment in safety net and health and infrastructure and education programs,” make it harder to fund economic stimulus programs should the economy demand it, and—in a talking point that might sound familiar to people who remember what life was like in 2011—hurt young people who “might be here when some of these fiscal time bombs start to go off.”

It was a little surprising—in my time on the campaign trail this year, I really haven’t heard a lot about the deficit, an object of Republican fixation during the Obama presidency that was used as justification for several debt-ceiling showdowns but which seems to have largely faded from view during the Trump administration. Maybe Buttigieg was speaking off the cuff and we shouldn’t read too much into it. But then, again, at a town hall on Sunday in Nashua, Buttigieg very conveniently received almost the exact same question out of the fishbowl.

“How important is the deficit to you?”

Buttigieg’s eyes lit up as he answered. “Important—that’s the short answer,” he said. “And I think the time has come for my party to get a lot more comfortable owning this issue. Because we’ve seen what’s happened with this president—a trillion dollar deficit, and his allies in Congress do not care. So we’ve got to do something about it!”

“It’s not fashionable in progressive circles, I think, to talk too much about the debt,” he acknowledged. But Buttigieg was there to offer some hard truths.

The idea that progressives don’t really care about this issue is an odd one, considering just how much of an emphasis the Obama administration placed on reducing the deficit (Obamacare reduced it!), and how much time it spent trying to broker a “grand bargain” to reform Social Security and Medicare. Democrats spent much of those eight years talking a lot about deficits, in part because Republicans spent much of that time pretending that Democrats weren’t. Then- and current-speaker Nancy Pelosi implemented pay-as-you-go rules mandating that bills in the House be paid for, and Pelosi has already signaled that PAYGO will be back in a Democratic administration. For the last few decades, Democrats have been the fiscal hawks.

But New Hampshire’s open primary does allow for a surge of moderate and conservative independents on Election Day, and Buttigieg—who nods to the prevalence of “future former Republicans” at his rally—perhaps thinks he stands to benefit from a little bit of lefty-bashing, real or imagined.