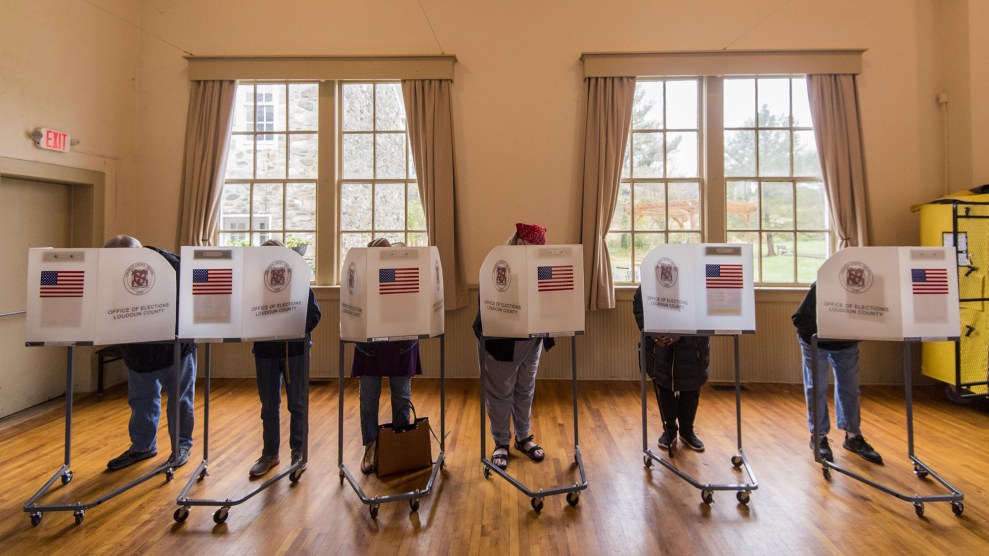 Election officials in Louisiana said Friday that primary elections scheduled for next month in the state would be delayed over concerns around the coronavirus.

The state was set to hold its presidential preference primary on April 4, along with down-ballot local elections. But election officials, citing public health concerns related to elderly poll workers, have postponed the primary until June 20, according to Tyler Brey, the press secretary for Louisiana Secretary of State Kyle Ardoin.

“Americans have participated in elections during challenging times in the past.”

“We obviously care very much about people exercising their right to vote, but at a certain point it was getting to be a public safety concern,” Brey told Mother Jones, noting that half of Louisiana’s early voting and Election Day poll workers are over the age of 65. “That weighed heavily into the decision.”

Brey said the Secretary of State’s office was concerned about how many of them would be willing to serve, and also about the potential that those that felt they could would change their mind as Election Day drew closer, possibly at the last second, a situation that would put the election “very much in trouble.”

“Obviously we don’t like to do this, but these kinds of things don’t happen every day,” he said.

In Louisiana, all voters over the age of 65 can vote absentee or by mail for any reason excuse, while those younger cannot. While Brey said the state is encouraging those older voters to take advantage of that privilege, but that it wouldn’t be possible to expand equal access to mail in ballots to all voters by June 20.

“Logistically we just don’t have enough time to get the ballots printed, the envelopes, the scanning equipment—that would need to be certified before we could use it—and quite frankly we didn’t want to have the Louisiana voters be a guinea pig for something that we were putting together so last minute and so outside of our expertise,” Brey said, adding that there had not yet been discussions about the November elections.

After Louisiana’s announcement, a bipartisan group of made up of the top voting officials in Arizona, Florida, Illinois, and Ohio—all of which hold primaries on Tuesday—issued a joint statement saying that the elections would go ahead and that they were working “to ensure that our poll workers and voters can be confident that voting is safe.” The statement noted that “Americans have participated in elections during challenging times in the past.”

Kate Bedingfield, a spokesperson with former Vice President Joe Biden’s campaign, said in a statement that “our elections can be conducted safely in consultation with public health officials,” and that if “voters are feeling healthy, not exhibiting symptoms, and don’t believe they’ve been exposed to COVID-19″ they should “please vote on Tuesday.”

“If voters are members of an at-risk population, exhibiting symptoms, or have been exposed to a diagnosed case of COVID-19, we encourage them to explore absentee ballots and vote by mail options,” she added. Representatives from Sen. Bernie Sanders and President Trump’s campaigns didn’t immediately respond to a request for comment.

Aimee Allison, the founder of She the People, a political advocacy group for women of color, called for hastened implementation of a national vote-by-mail system, issuing a statement that called Louisiana’s decision “a threat to democracy” that “set a dangerous precedent”