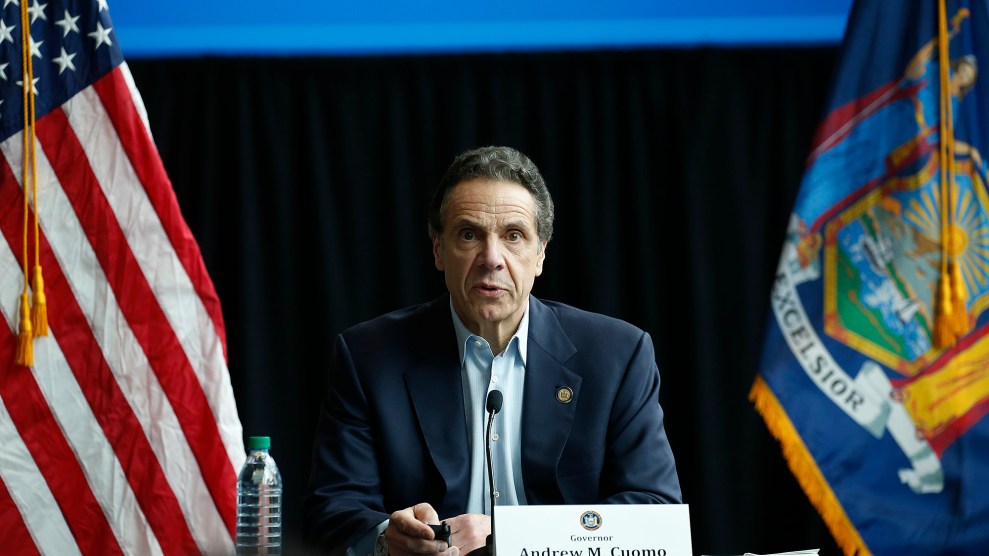 The Trump campaign has spliced together footage of Democratic governors giving positive reviews of the Trump administration’s handling of the coronavirus pandemic and plans to spend five figures to run it on Facebook and YouTube, according to CNN. It’s unlikely to be the last time Trump uses the words of Democratic governors to combat the public’s low approval of his response to the crisis.

“When I’ve called the president, he’s quickly gotten on the line,” California Gov. Gavin Newsom says in footage that kicks off the ad. “What the federal government did, working with states, was a phenomenal accomplishment,” New York Gov. Andrew Cuomo says next in footage from one of his press briefings. Governors Phil Murphy of New Jersey and Michelle Lujan Grisham of New Mexico are also shown complimenting the president and his administration. The ad ends with Newsom saying what has become one of the campaign’s slogans: “Promise made, promise kept.”

Historically, leaders have viewed a national crisis as an opportunity to put partisanship aside and work across party lines. The federal government is expected to respond robustly and impartially to a disaster, members of the opposite party will then express appreciation for a job well done, and voters will welcome the nonpartisan response. But those norms have disappeared during the coronavirus pandemic. The Trump administration and most of his fellow Republicans see the crisis through a partisan frame; Mitch McConnell recently called aid to states “blue state bailouts.”

President Donald Trump has been open about the fact that he saw aid to blue states as a transaction: He’ll send supplies like masks and ventilators to combat the virus if the governors say nice things about him. The not-so-subtle message for over a month has been that if blue states hit the hardest by the pandemic want government help, they should offer something in return. As it turns out, what their governors have provided is fodder for campaign ad footage.

Last month, Michigan Gov. Gretchen Whitmer criticized the federal government’s response and asked for a federal disaster declaration for her state. “We’ve had a big problem with the young, a woman governor from—you know who I’m talking about—from Michigan,” Trump told Sean Hannity on Fox News. “We can’t—we don’t like to see the complaints.” He initially withheld the desired disaster declaration, saying that he had a big decision to make on it. (He ultimately granted it.) Trump likewise attacked Washington Gov. Jay Inslee (D) as a “nasty person” and a “snake” for his criticism of Trump’s response.

On March 28, a reporter asked Trump during a press briefing: “What more, specifically, do you want the governor of Washington and the governor of Michigan to be doing?” Trump responded: “All I want them to do—very simple—I want them to be appreciative.” Normally, a governor will show appreciation after receiving federal aid, but Trump wanted to reverse the process. “I say, ‘Mike, don’t call the governor of Washington. You’re wasting your time with him. Don’t call the woman in Michigan.'” he continued. “If they don’t treat you right, I don’t call.”

Trump has long shown that he views governing as a massive patronage system, in which he doles out resources —including critical aid—in response for political favors. During Trump’s impeachment of earlier this year, members of Congress concluded that the president had withheld security aid to Ukraine in exchange for a political favor. During the House’s impeachment hearings in December, Stanford law professor Pamela Karlan framed his behavior in terms starkly similar to what is happening today. Imagine a state needs aid after a hurricane, she suggested, and the president says, “I would like you to do us a favor. I’ll meet with you, and I’ll send the disaster relief, once you brand my opponent a criminal.”

Pamela Karlan: “What would you think if, when your governor asked the federal government for the disaster assistance that Congress has provided, the President responded, ‘I would like you to do us a favor.’ I’ll… send the disaster relief once you brand my opponent a criminal.” pic.twitter.com/J96FY30k3y

Fast forward to the current public health crisis. In this case, Trump flirts with withholding aid until he gets plaudits from governors. That those comments are now part of Trump’s campaign isn’t a surprise. It was part of the bargain.