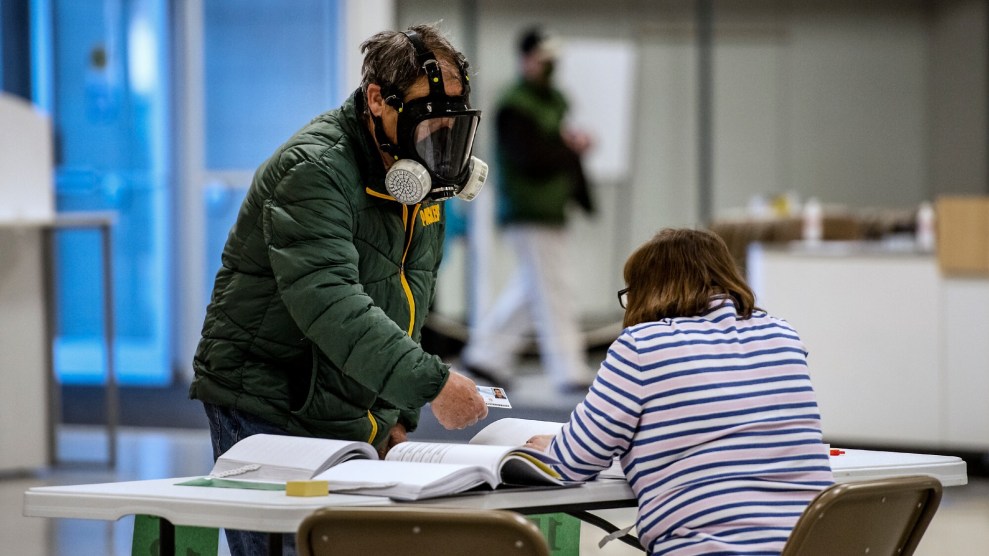 Though many states have postponed their elections during the coronavirus pandemic, Wisconsin proceeded with its primary last week despite a statewide shelter-in-place order and a dizzying ping-pong of conflicting orders by the State Supreme Court, the governor, and the United States Supreme Court. In Milwaukee, which has been particularly hard hit by the coronavirus and which is home to two-thirds of the state’s Black population, only five of 180 polling stations were open last Tuesday after many poll workers opted to stay home. Some voters reported waiting in line for five hours. Viral photos showed voters wearing masks and standing six feet apart in long lines, with some holding signs in protest.

Thank you to everyone that’s been sharing my photo! And thank you for getting the message out. https://t.co/iXaMo9vTok

Earlier this month, my colleague Ari Berman reported how we got here:

When [Democratic Gov. Tony] Evers called on the legislature to postpone Tuesday’s elections amid a rising outbreak of the coronavirus or to mail a ballot to every registered voter, Republican leaders immediately refused. Their intransigence seemed likely to ensure that a conservative justice on the state Supreme Court would be re-elected in a contest with lower Democratic turnout, as dense cities like Milwaukee are hit hardest by the crisis and have seen the most polling places shuttered.

Still, Karofsky won, despite the apparent political calculus that holding an election in a pandemic would benefit Kelly. (The results were released almost a week after the vote due to a court ruling that allowed absentee ballots to be counted through Monday April 13.) Karofsky’s victory will narrow the conservative majority on the Wisconsin Supreme Court from 5-2 to 4-3, which could have implications for future elections. An entrenched conservative majority would have made it more likely the court would allow the state to “purge 232,000 voters, disproportionately from Democratic areas like Madison and Milwaukee, from the voter rolls before the 2020 general election,” as Ari reported.

“Although we were successful in this race, the circumstances under which this election was conducted were simply unacceptable, and raise serious concerns for the future of our democracy,” Karofsky said in a statement. “Nobody in this state or in this country should have been forced to choose between their safety and participating in an election.”