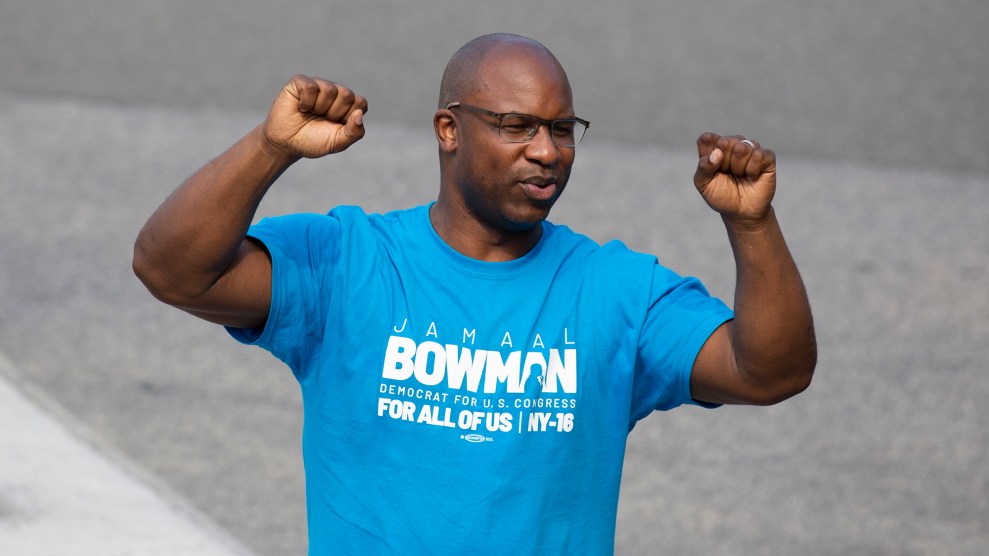 Jamaal Bowman, Democratic candidate for NY-16, addresses supporters at a stop in Hastings-on-Hudson during his ''Bowmentum World Tour'' the weekend before Election Day.Gina M Randazzo/ZUMA Wire

Another year, another congressional heavyweight from New York City who is on the verge of falling to a primary challenge from the left. In 2018, it was nine-term Rep. Joe Crowley, the House Democratic Caucus chair—considered by many to be next in line to be speaker of the House—who was unseated by a democratic socialist bartender, Alexandria Ocasio-Cortez, in a district that spanned the Bronx and Queens. This time, it’s 16-term Rep. Eliot Engel (D), the chair of the House Committee on Foreign Affairs, in a neighboring Bronx district that extends into suburban Westchester County. Tens of thousands of absentee ballots still remain to be counted, and the race is not likely to be called for days. But Engel’s opponent, 44-year-old former middle school principal Jamaal Bowman, declared victory on Wednesday morning after election-day returns gave him a commanding 27-point advantage over the incumbent.

Bowman, who was recruited to run by Justice Democrats and backed by the group’s most distinguished alumnus—Ocasio-Cortez—started off as a long shot with little name recognition, but fought his way up in the polls with a relentless campaign focused on racial and environmental justice. Although Engel has espoused support for a Green New Deal and Medicare for All—policies that in plenty of places might put him in the good graces of progressive activists—Bowman painted his opponent as corporate-funded and out of touch, hammering Engel for his ties to Wall Street and his at-times hawkish views on foreign policy. (Engel voted for the Iraq War.) Bowman was dubbed “the next AOC” by CNN, the New York Times, and the Wall Street Journal, but he was a political force in his own right, with an energetic and personable campaigning style that highlighted his opponent’s dusty longevity:

While Bowman surged in the spring, Engel faltered. When the district became the early epicenter of the coronavirus pandemic, a reporter from the Atlantic found the representative at his home…in suburban Maryland. Then, at a press conference on police brutality earlier this month, Engel was caught on a hot mic asking a fellow politician for speaking time. “If I didn’t have a primary, I wouldn’t care,” he said. Bowman called Engel’s comment “painful to watch” and said it was time for “new leadership.”

As the race heated up, it became a proxy battle between competing coalitions within the Democratic Party. Engel was endorsed by both of the state’s Democratic senators, Speaker of the House Nancy Pelosi, and Westchester County’s own Hillary Clinton.

For those keeping score at home on #NY16

And that's just the starting nine for @RepEliotEngel.

But the left wing of the party is increasingly seizing power in the state. Although Sen. Bernie Sanders’ presidential campaign faltered nationally, the New York metro area has been a major bright spot. In 2018, just a few months after Ocasio-Cortez’s stunning victory, progressive challengers backed by the Working Families Party knocked off seven incumbent state senators, mostly in New York City. Some of those newly elected insurgents went on to back the WFP-endorsed Bowman (as did Sanders and Sen. Elizabeth Warren). When Bowman spoke on Tuesday, he was introduced by Alessandra Biaggi, a Bronx state senator who defeated an incumbent in 2018 and who flipped her endorsement from Engel to Bowman late in the race. (Because New York politics is an adventure, Engel actually first got elected to the House by defeating Biaggi’s grandfather, Rep. Mario Biaggi, in a 1988 primary.) Barring a miracle with absentee ballots, it’s a fittingly symbolic bookend to Engel’s electoral career.

And Bowman may not be the only big win for insurgent Democrats in the New York area. Just up the Hudson, another Ocasio-Cortez–backed candidate, Mondaire Jones, was leading in the primary to replace the retiring Rep. Nita Lowey (whom Jones had initially been running against). That race has yet to be called. Further down-ballot, Democratic Socialist–backed candidates were threatening to win state legislative districts in Brooklyn and Queens.

Back in May, National Journal published a piece heralding “The end of Alexandria Ocasio-Cortez’s revolution.” She crushed a well-funded primary opponent on Tuesday—so much for that. The revolution, if anything, looks like it’s still going strong.