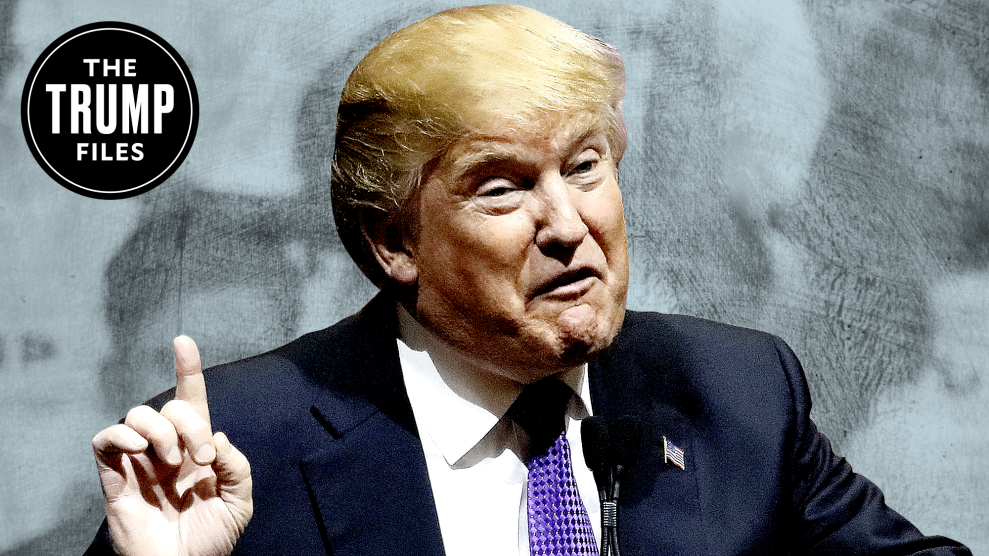 This post was originally published as part of “The Trump Files”—a collection of telling episodes, strange but true stories, and curious scenes from the life of our current President—on August 24, 2016.

“Forty Wall Street is a special building,” Donald Trump declared in The Art of the Comeback, his 1997 book. And he’s right—but not in the way he  probably meant.

Trump devoted an entire chapter of that book to bragging about his acquisition of 40 Wall Street, now called the Trump Building at 40 Wall Street, a 72-story office tower he called “perhaps the most beautiful building in New York.” In his telling, Trump purchased the building from its bumbling Hong Kong-based owners for a paltry $1 million. He then renovated it into a $20 million-a-year cash cow that fetched some of the highest rents in the city at the time. When Trump tried to sell the building in 2004, he expected to get offers of at least $400 million, but none apparently arrived and he took the building off the market.

Bloomberg wrote in June that 40 Wall Street “may be the best deal of his career. No single property in his portfolio is more valuable than 40 Wall Street, according to a Bloomberg valuation of his assets last year.” But there’s a catch. Bloomberg also reported that “no U.S. address has been home to more of the unregistered brokerages that investors complain about, according to the Securities and Exchange Commission’s current public alert list.”

While there are plenty of legitimate businesses at 40 Wall Street, the Bloomberg reporters found that shady companies or businesspeople could, and did, snatch up offices at the Trump Building to get themselves a Wall Street address and the cachet that comes along with it. That’s in part because rents at 40 Wall Street have apparently sagged over time, as have rents on Wall Street in general. When having office space next to the New York Stock Exchange became less important for financial firms, Trump was forced to entice renters with low rates. So while Trump boasted in 1997 that rents in the building were “at the top of the downtown Manhattan market,” Bloomberg found that the average space at 40 Wall Street now rents for $20 less per square foot than the area average. The Wall Street Journal also reported in 2012 that the building’s $27-per-square-foot starting rent hadn’t budged since Trump had taken over.

“Since Donald Trump took over 40 Wall Street in 1995, prosecutors have filed criminal charges against at least 29 people connected to 12 alleged scams tied to the building,” Bloomberg wrote. “Current executives at 40 Wall St. include a 29-year-old who made millions of dollars lending money to penny-stock companies. A financier fighting criminal fraud charges is on the 38th floor. On the 28th, where offices can be rented for $10 an hour, cash-advance firm Viceroy Capital Funding is run by a man awaiting sentencing for his role in a marijuana-smuggling ring.”

But the biggest scam at 40 Wall Street may have been run by Trump himself: The building is also the former headquarters of Trump University.