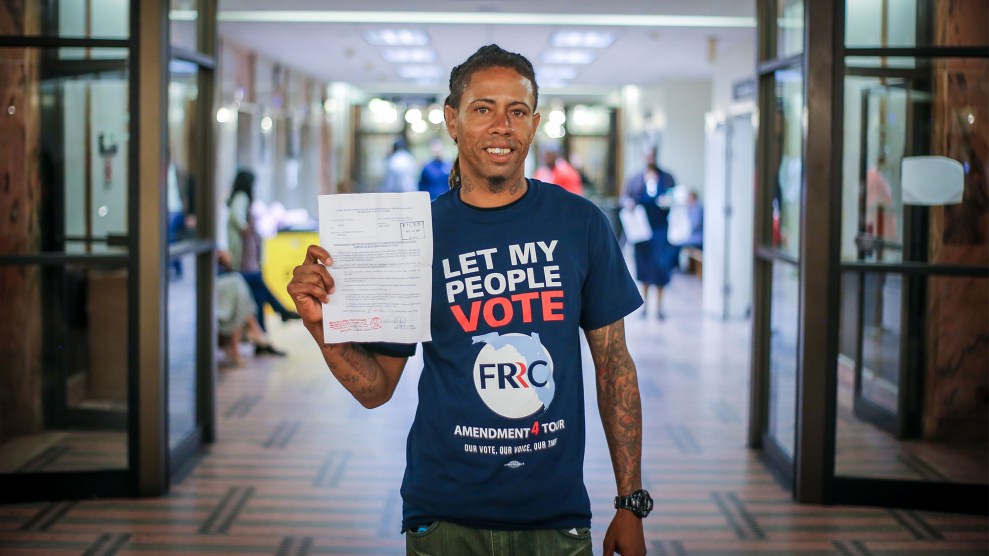 Michael Monfluery, 38, who has never been eligible to vote, stands in a Miami-Dade courthouse following a special court hearing aimed at restoring the right to vote under Florida's Amendment 4. ZAK BENNETT/AFP via Getty Images

On Friday afternoon, a federal appeals court upheld a Florida law requiring people with past felony convictions to pay off all fines, fees, and restitution before becoming eligible to vote, potentially denying the franchise to hundreds of thousands of citizens in a key battleground state.

Courts have made voting more difficult, particularly for Democratic-leaning constituencies.

In 2018, 64 percent of Florida voters approved a historic ballot initiative, Amendment 4, restoring voting rights to people who’d been stripped of them due to felony convictions. But a year later, the Florida legislature passed a law adding a requirement that people seeking their right to vote under the initiative pay off all financial obligations stemming from their convictions. Voting rights advocates called the move a modern-day poll tax, and have warned it could prevent 775,000 people from voting even though they’ve served their time. While a lower federal court had struck down that “pay-to-vote” law, the 11th circuit court of appeals, which has a Republican majority thanks to five Trump-nominated judges, upheld it. “The financial obligations at issue are directly related to legitimate voter qualifications,” wrote Chief Judge William Pryor, a George W. Bush appointee, in a 6-4 decision.

It’s the latest in a series of recent decisions by Republican or conservative-dominated courts that will make voting more difficult, particularly for Democratic-leaning constituencies.

On Thursday, another federal court of appeals ruled that a Texas law that allows voters over 65 to vote by mail for any reason but forbids people under 65 from citing fear of contracting COVID-19 as a reason does not violate constitutional prohibitions on age discrimination. Younger voters in Texas are far more likely to be Democrats and people of color than voters over 65.

That same afternoon, the conservative majority on the Wisconsin Supreme Court ruled that counties could not begin sending out mail ballots until it ruled whether the Green Party’s presidential candidate qualified for November’s election. That ruling could lead to widespread voter confusion or delays, since counties have already begun mailing out 378,000 absentee ballots requested by voters. Nearly half of Wisconsin Democrats say they plan to vote by mail, compared to just 18 percent of Wisconsin Republicans. Any obstacle involving mail balloting will disproportionately affect Democratic voters.

The ruling affecting Florida could lead to massive uncertainty among voters who have felony convictions. The state has no central database where people can check whether they owe money related to their sentence. meaning thousands of voters who remain eligible under the ruling could still be dissuaded or prevented from voting. “Had Florida wanted to create a system to obstruct, impede, and impair the ability of felons to vote under Amendment 4, it could not have come up with a better one,” wrote Judge Adalberto Jordan in a scathing dissent.

The decision comes just 52 days from the November election, in a state where polls suggest Biden and Trump are neck-and-neck—and which was decided by only 537 votes in 2000.