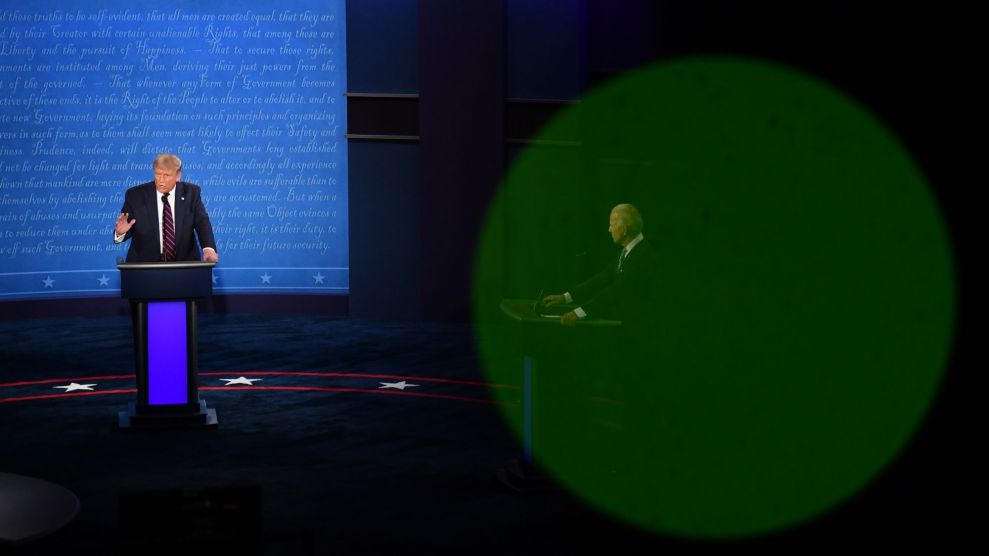 It’s not particularly difficult to describe what happened at Tuesday night’s debate. Donald Trump spent 90 minutes lying, interrupting, and attacking Joe Biden’s family. He refused to denounce white supremacists and violent militia groups and urged the neo-fascist Proud Boys to “stand back and stand by.” Trump has behaved this way throughout his presidency, but his actions on the debate stage in Cleveland were still shocking. We know this is what happened because we saw it with our own eyes and heard it with our own ears.

Biden, on the other hand, did not behave this way. He attempted to follow the debate rules, to answer the moderator’s questions, and to talk about policy and Trump’s abysmal record. Trump shouted over Biden nearly every time the former vice president spoke. After countless interruptions, Biden finally told Trump to “shut up”—one can hardly blame him.

There is simply no reasonable way to draw an equivalence between the two men’s actions. Yet somehow, many of the nation’s headline writers did just that—implying that the debate was simply a partisan food fight in which both sides were to blame for hurling insults. Here’s the front page of today’s Cleveland Plain Dealer (via the Newseum):

Three headlines, with no indication at all that it was Trump who was responsible for the “insults,” the “interruptions,” and the dashed “hopes for a civil policy discussion.” It’s not that the Plain Dealer’s journalists were unaware of what actually happened at the debate or somehow saw it differently. The story on the right side of the page notes that Trump “largely revert[ed] to his normal routine—interrupting, name calling and outright ignoring the topics at hand and instead constantly turning the discussion to Biden’s son, Hunter. ” The online version of the story adds:

In fact, the debate got so bad, [moderator Chris] Wallace was forced to give Trump a stern talking-to.

“I think the country would be better served if we let both people speak without interrupting,” Wallace said to Trump, after nearly an hour of seemingly unending talking over one another.

“Him too?” Trump asked of Biden.

Biden did try to stay on topic for the most part, only engaging in the back-and-forth when drawn into it by Trump, likely in an attempt to appear presidential and convince voters who dislike Trump’s abrasive style to switch sides.

It’s not hard to convey these basic facts in a headline—to communicate that it was Trump who was, yet again, responsible for creating chaos. The New York Times, for example, did an adequate job: “TRUMP’S HECKLES SEND FIRST DEBATE INTO UTTER CHAOS.” But the Plain Dealer chose not to do that. It wasn’t alone. Here’s a sampling of similarly egregious, both-sides-style headlines from across the country: