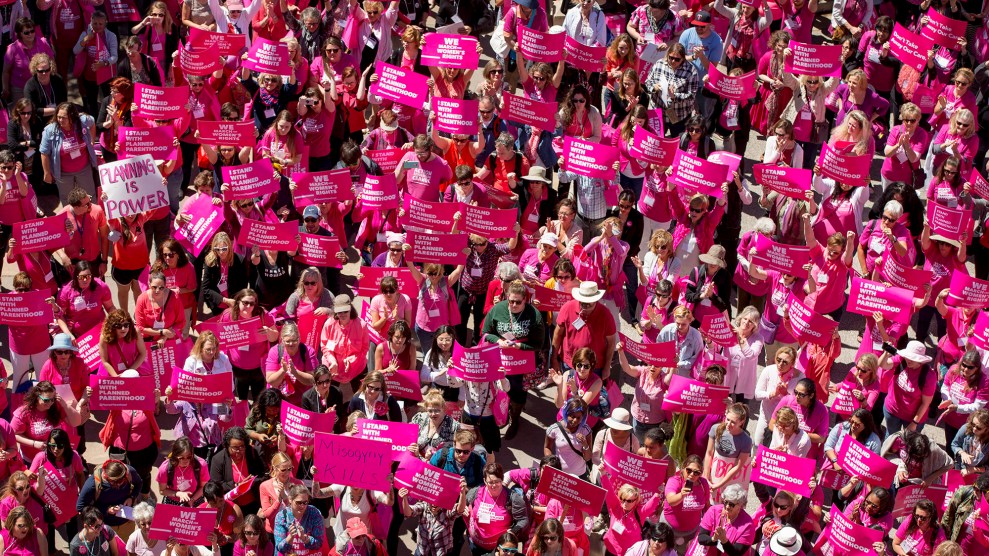 Demonstrators participate in a rally for Planned Parenthood at the Capitol in Austin, Texas, in April 2017. Jay Janner/AP

If you support access to abortion, you’re probably pretty freaked out about Amy Coney Barrett joining the nation’s highest court this week. There are plenty of ways to channel your angry energy—like, as the Cut aptly suggests, donating to an abortion fund, though you probably didn’t think one of them was focusing on…the Arizona state legislature. But as a new phase of the battle over abortion rights in the United States heats up, reproductive rights groups are paying special attention to statehouses like in Arizona, where Republican strongholds are vulnerable and the vast majority of extreme abortion restrictions are born.

Flipping statehouses is a game that Republicans have long been playing—resulting in, among other dangerous policies, more than 450 abortion restrictions since 2010.

Flipping statehouses is a game that Republicans have long been playing—resulting in, among other dangerous policies, more than 450 abortion restrictions since 2010. Democrats have played it, too, to a certain extent; Planned Parenthood counts Illinois’ progressive stance on abortion rights among its victories at the state level. But reproductive rights advocates are hopeful that much larger changes are within grasp. The 2018 midterms offered a glimpse of progressive momentum when Virginia’s legislature turned blue for the first time in nearly three decades, and lawmakers there have since been rolling back abortion restrictions and expanding access. As Elizabeth Nash, the state policy expert at the Guttmacher Institute, points out, even Texas’ notoriously anti-abortion legislature has mellowed a bit; when a wave of abortion bans in 25 states swept across the South and Midwest in quick succession last year, Texas was conspicuously not among them. “We’re seeing investments in [state elections] beginning to be made in part because of the threat at the federal level, and in part because it looks like now is a time when legislators might be shifting to being more moderate or even progressive,” Nash says.

Arizona has passed a deluge of abortion restrictions over the past decade. Dr. Gabrielle Goodrick, an abortion provider with Camelback Family Planning in Phoenix, says keeping up with the burdensome restrictions passed year after year has been difficult for her clinic and her patients. Once, charts were a quarter of the size they are now. “We have to ask the patient, ‘Why do you want to have an abortion?’ No other procedure has a physician asking a patient, ‘Why do they want to have a colonoscopy?'” she says. “All this ridiculousness that doesn’t add anything to the patient’s safety or helps them in any way, it just creates burdens for them.” The state has a 24-hour waiting period in place between issuing state-mandated, medically inaccurate counseling and an abortion procedure, as well as an ultrasound requirement, a ban on telemedicine, and a host of unnecessary, expensive regulations that clinics must adhere to in order to maintain licensure.

According to Kelley Dupps, a spokesperson for Planned Parenthood Votes Arizona, the reproductive health care organization’s political arms have been ramping up their investment in the state over the past several years, both to gain another Democratic US Senate seat and to flip the state legislature. The work has escalated this year with a $2.6 million program to reach at least 600,000 Arizona voters.

Planned Parenthood Votes Arizona and Planned Parenthood Advocates of Arizona, two branches of the organization that work on voter education and political lobbying, have been using phone and text banking, online engagement, and digital ads to broadly educate voters about what’s at stake in this election—reproductive rights, as well as immigrant rights and access to health care, to name a few issues.

Planned Parenthood Votes has been partnering with local social justice organizations to continue to build community on the ground. Dupps points back to Arizona’s passage of SB 1070 as a galvanizing force that began a decade-long organizing effort that brought together Planned Parenthood’s political arms and local progressive groups, many of which are Latinx-led. My colleague Fernanda Echavarri wrote recently about the rise of Latinx organizing in the years leading up to 2020:

Many of the young Latinx organizers trying to get out the vote were galvanized in April 2010, when Republican Gov. Jan Brewer signed one of the nation’s most extreme anti-immigrant bills. SB 1070 required police officers to ask about the citizenship status of anyone they stopped and suspected might be in the country illegally. It also made it a crime not to produce legal residency documents when asked to do so by a cop or to have an undocumented person in your car or home. The law wreaked havoc on Latinx communities statewide, especially in Maricopa County, where Sheriff Joe Arpaio delighted in using it to intimidate and harass residents.

One such group is LUCHA, or Living United for Change in Arizona, which, as Fernanda notes, is dedicated to “help[ing] protect the Latinx community in Arizona” and “defend[ing] [its] existence.” Over the past several years, LUCHA and Planned Parenthood Votes have held bilingual town halls to discuss health care and a rally to support Democrat Mark Kelly’s US Senate candidacy.

Planned Parenthood Votes has also joined up with Jews for Justice—another progressive nonprofit with many Latinx staffers, which uses the values of the Jewish faith to seek social justice—for some voter registration work. Eddie Calderon, the campaign organizer with Jews for Justice, says the group has seen particular success registering people who are experiencing homelessness, which, he notes, is a population that is largely Latinx in Arizona. He and his colleagues have been distributing hygiene kits, masks, and water in homeless encampments—a crucial service considering the triple-digit heat wave that has steadily plagued the state from April through mid-October—and educating folks about their voting rights. “You don’t have to have a legit address, you can put the cross streets of where folks stay…it’s been really interesting to see that some folks didn’t know that they can even register to vote,” he says. Dupps and Calderon say the groups naturally play off each other because of their shared dedication to immigrant rights, so they have some of the same volunteers.

“It’s awesome to be able to engage with [voters] and talk about our issues and have that kind of trust because we’ve been doing the work for the past six, seven years, and not just going to communities every four years.”

Reproductive rights advocates say there’s no denying the energy on the ground right now. Goodrick says she has never seen this kind of mobilization, that she’s gotten more calls and texts and mailers than ever, and the election is a constant topic of conversation. Dupps attributes Planned Parenthood’s momentum to years of relational organizing in the state, meaning they are working with Arizona voters to recruit their friends and family. “It’s awesome to be able to engage with [voters] and talk about our issues and have that kind of trust because we’ve been doing the work for the past six, seven years, and not just going to communities every four years, or every two years here in Arizona, when we need them to vote; it’s all about building community,” he says.

All this energy is, of course, dovetailing with a fierce battle for president in the state, and the heated race for a US Senate seat between Kelly and Republican Sen. Martha McSally. Democrats also hope their organizing will pay dividends past 2020 and into 2022, when Republican Gov. Doug Ducey’s term expires.

As for the statehouse, “Republican and Democratic strategists agree it’s most likely Democrats will win the state House, but Republicans will retain control of the state Senate—though a full flip is certainly possible,” according to Politico.

“I’m feeling really hopeful. I’m feeling optimistic at this point,” Goodrick says. “We’ll see, but I don’t see any harm in being optimistic. It’s kind of fun for a change.”