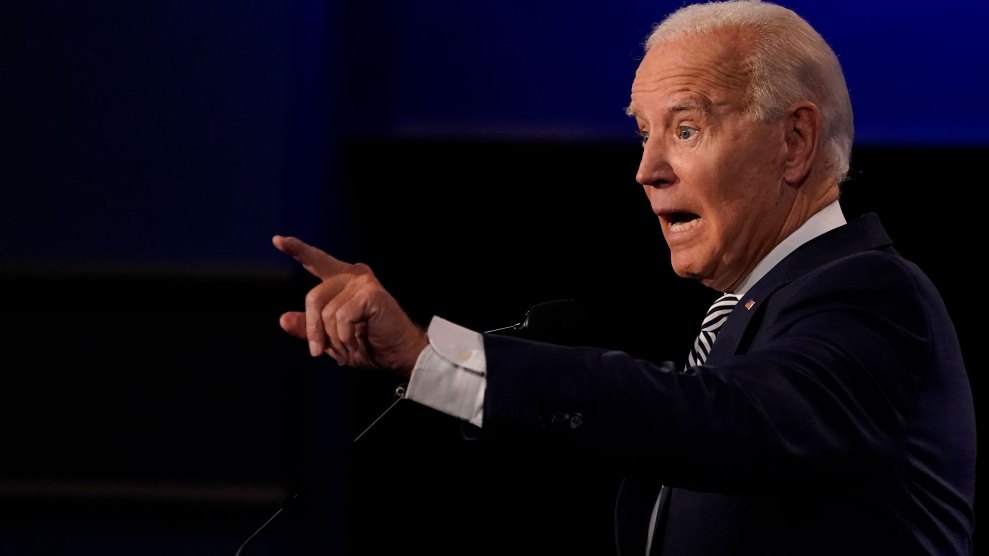 During Tuesday’s night’s chaotic schoolyard brawl of a debate, moderator Chris Wallace asked both Joe Biden and President Donald Trump why the nation should trust them on issues of race. Biden opened up by leaning on the tropes of equality and decency and attacking Trump for his use of racial “dog whistle[s].” Then, he magnified the persistent, devastating truth about the coronavirus pandemic: Communities of color, particularly Black Americans, are disproportionately getting sick and dying from COVID-19.

Biden made some missteps when he talked about race during the night. He painted a misleading portrait of contemporary suburban life, claiming that America’s suburbs are “by and large integrated.” He called for “law and order with justice, where people get treated fairly,” pointing to a few “bad apples” in police departments who needed to be held accountable. Still, Biden was correct about the disparate toll the pandemic has had on Black Americans. But the magnitude of the devastation in communities of color is even worse than he let on.

As my colleague Sinduja Rangarajan and I pointed out in April, the pandemic has disproportionately afflicted Black and Latinx communities from the start. Months later, the trend has grown even more pronounced. American Public Media’s Research Lab has found that Black Americans have suffered 21 percent of the nation’s COVID-19 death toll, even though they make up 12 percent of the nation’s population. Their coronavirus death rate is nearly 98 in 100,000, more than twice that of white and Asian people. The numbers are also especially devastating for Indigenous people, Pacific Islanders, and Latinx Americans.

An analysis by the Harvard Center for Population and Development Studies released in June found that, when adjusted for age, the disparity is even starker. Among people between the ages of 25 and 34 years old, Black Americans were seven times more likely to die from COVID-19 than white Americans. Latinx Americans in that same age category died at more than five times the rate of white Americans. The disparities worsen for people in the prime of life: Latinx and Black Americans between the ages of 35 and 44 died at eight and nine times the rate of white Americans, respectively.

The imbalance is evident throughout the Midwest and South, two regions where Biden is vying for support while Trump’s struggles to hold onto his. An analysis by Mother Jones using data from the Atlantic‘s COVID Racial Data Tracker found that as of September, Black people are dying at alarmingly disproportionate rates not just in Republican strongholds but in battleground states like Pennsylvania, Michigan, and Wisconsin.

A disturbing trend unravels beneath all this data: Despite the fact that Black and Latinx Americans make up just 12 and 18 percent of the US population, respectively, the absolute years lost from lives cut far too short in both these communities represents a debilitating generational affliction that will be felt for some time. In her study, Bassett calculated that between February and May, COVID-19 had wiped out nearly 46,000 years of potential life among its Black victims and more than 48,000 years of life among its Latinx victims. In contrast, White Americans lost just over 33,400 years.

I’m reminded what Bassett told me back in June: these disparities in COVID-19 deaths are not due to biological traits or differences, but rather “because of the social consequences of race in our society, which has been reinforced by decades, centuries of bad practices and policies.” This, at least, is something the next president has some sway over. It’s one thing to spot the problem and care about it, as Biden did Tuesday night. It’s another to act on it.