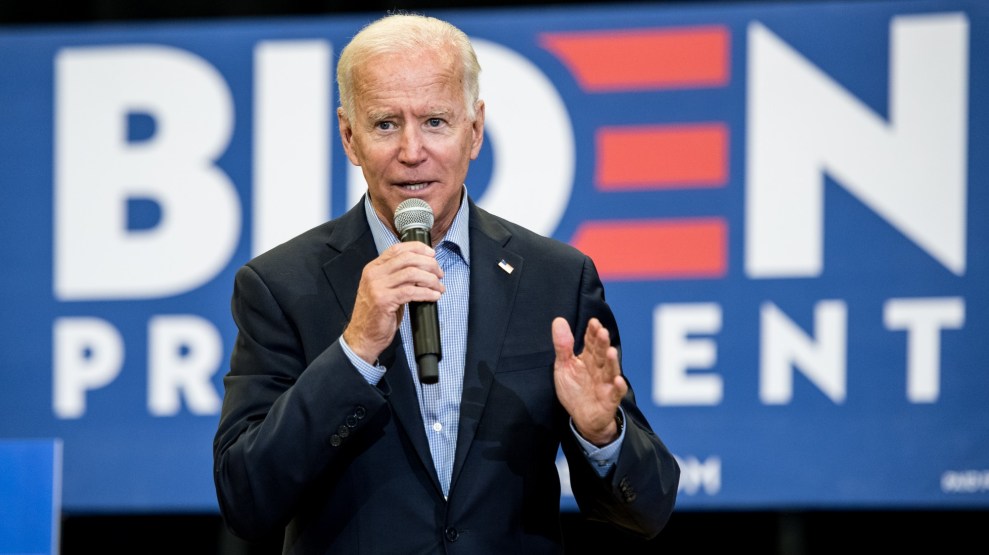 During the Democratic 2020 primary, former Vice President Joe Biden was the only Democratic presidential hopeful who did not appear on Pod Save America, the flagship podcast of the liberal Crooked Media network. But that long absence ended in an episode released on Saturday morning, when he spoke with the hosts—both former Obama staffers—to outline his priorities should he defeat President Donald Trump.

In the episode, Biden was asked what “three or four things” are at the top of his first-term agenda. “Get control of coronavirus. Without that, nothing else is going to work very well, number one,” he said. “Number two: invest in the community, in real infrastructure.”

Lawmakers from both parties have long talked about the importance of an infrastructure deal, but an actual bipartisan consensus has always been out of reach. The House passed a $1.5 trillion infrastructure bill in July, aimed at boosting transportation spending and reducing pollution, among other provisions. But the measure was never was taken up in the Senate, where Majority Leader Mitch McConnell (R-Ky.) called it “pointless political theater.” Trump, meanwhile, has veered away from the topic so often during planned policy speeches about it that recently the word itself has ascended to meme status. As the New York Times reported last year, “Long ago, the political and pundit class began to recognize any mention of infrastructure-themed events as a catchall joke symbolizing any substantive—if pie-in-the-sky—policy objective destined to go nowhere.”

If Biden ends up making infrastructure a priority, and has a Democratic House and Senate to work with, the long-running meme could actually become a legislative reality. Infrastructure wasn’t the only big spending plan Biden had on his mind during his discussions with the hosts either. He said the United States is “going to own the electric automobile market” and create “a million jobs in doing that.” In a revival of his mission at the end of the Obama administration to cure cancer, Biden also vowed to “invest $5 billion a year in cancer research.”

Biden’s absence from the podcast was a subject the hosts addressed directly in August. “It’s a little bit confusing to me,” host Jon Lovett, who was a former speechwriter for Obama, said. When Biden finally made it on the podcast, Lovett joked, “As Lesley Stahl said to Donald Trump before he walked out on the interview, are you ready for some tough questions?”

Even if his appearance was a long time coming, Biden at least saved a special zinger for it. Trump, he said, is “not a patch on Barack’s jeans.”