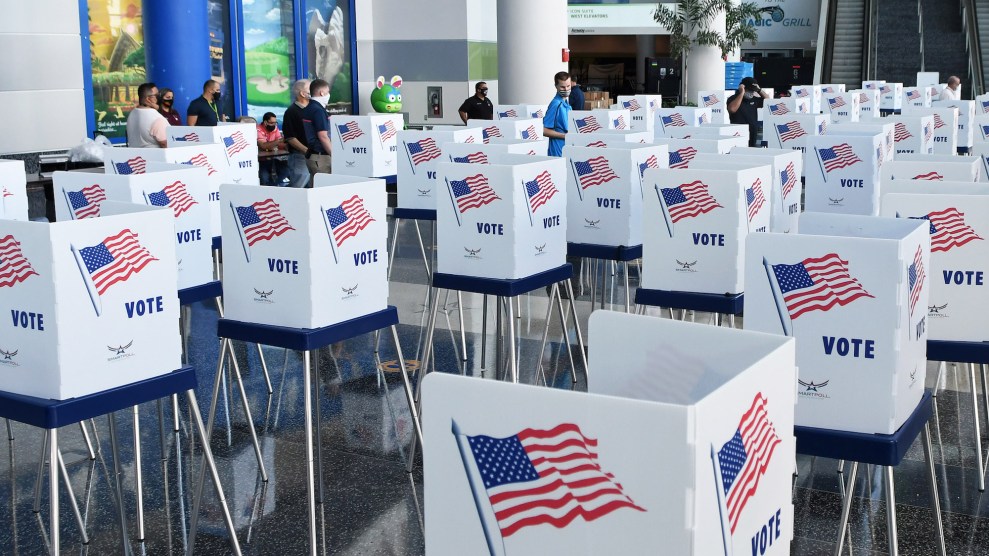 Election workers set up voting booths on Thursday at an early voting site in Orlando, Florida. Early voting in the state begins on Monday.Paul Hennessy/Getty

In a press call on Sunday, Senate Democrats stressed that the best way overcome President Donald Trump’s effort to undermine the integrity of the upcoming election is voting—and voting early.

Democrats organized the call to discuss a new report that makes clear that the winner of the presidential race may not be known on election night because it will take time to count mail-in ballots, which are expected to favor Democrats. “That is okay,” said Sen. Amy Klobuchar (D-Minn.). “The key thing is we’re going to count the votes.”‘

Sen. Bernie Sanders (I-Vt.) emphasized the same point. He also focused on Trump’s baseless claims that the election is being rigged against him. “I think that almost everybody in America now knows that Donald Trump lies a lot,” he said. One of Trump’s worst lies, Sanders continued, is that there is a massive amount of voter fraud in the United States.

Sanders pointed to an op-ed from last month by Benjamin Ginsberg, a longtime Republican election lawyer. “The truth is that after decades of looking for illegal voting, there’s no proof of widespread fraud,” Ginsberg wrote. “At most, there are isolated incidents — by both Democrats and Republicans. Elections are not rigged.”

As Mother Jones’ Pema Levy has written, Sanders has taken a leading role in warning that America’s democracy is in danger in this election:

With this speech [at the Democratic National Convention], he not only signaled his concern, but put himself forward as the ambassador for these fears. By bridging between the wonks on Twitter and the voters, and using his own popularity among the party’s left to ring alarm bells, Sanders is setting himself up to hold those in power accountable with—he hopes—a mass of Americans mobilized behind him.

The Democrats’ report divides states into four groups based on when ballots need to be received by and whether those ballots can be processed before the election. In swing states like Arizona and Florida, ballots need to be received by Election Day and can be processed in advance, meaning that it’s more likely that the winner of those states will be known on election night. At the other end of the spectrum is Pennsylvania, which does not permit advance processing and counts mail-in ballots that are post-marked by Election Day but arrive later.

The need to even put out the report is indication of just how bleak things have become under Trump. One line simply states, “Democrats support free and fair elections.”

Read the report below: