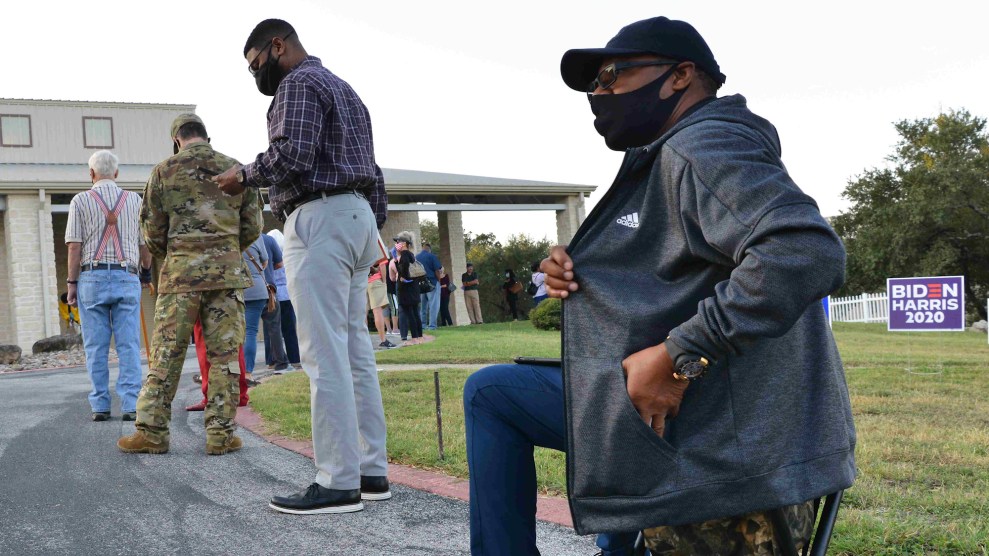 October 13, 2020: People in Garden Ridge, Texas line up early to cast their votes as early voting in the Presidential battleground state of Texas began early Tuesday. Voter turnout was expected to be very heavy as early voting runs through October 30 in Texas.Robin Jerstad/ZUMA

In the last week of September, Chris Hollins, the county clerk of Harris County, Texas, sent out mail ballots to voters in the Houston area who had requested them and set up 12 locations where voters concerned about delays with the US Postal Service could drop their ballots off. Then, on October 1, just as voters had started to return their mail ballots, Republican Gov. Greg Abbott issued an emergency declaration limiting mail ballot drop-off sites to one per county. The move appeared designed specifically to make voting harder in Harris County, the largest county in the state, which has 2.4 million registered voters and a larger landmass than Rhode Island.

It was the latest attempt by Texas Republicans to depress turnout in a state with a long record of voter suppression. Texas has no online registration. Voters need a valid excuse to get a mail ballot—and for those under 65, fear of contracting COVID-19 doesn’t count. The state’s voter ID law allows you to vote with a gun permit but not a student ID.

Yet when early voting began in Texas on October 13, Abbott’s plan to limit Democratic participation appeared to backfire, as voters in Harris County, where voters of color make up a majority and where Hillary Clinton won by 12 points in 2016, surged to the polls.

The numbers in Harris County have been astonishing. A record 128,000 people voted on the first day of early voting, up from 68,000 in 2016 and a higher turnout than the entire state of Georgia on the same day. Turnout has barely dropped since then. On Friday, Harris County surpassed 1 million early votes, exceeding its total from 2016 with a week of early voting still left, and nearly equaling the 1.3 million people who voted overall in 2016.

Hollins, the first Black clerk in Harris County history and the youngest at 34, credits a backlash against voter suppression for the unexpectedly high turnout. “Efforts to suppress votes in Texas and across the South have very often been done in secret, in smoke-filled rooms, in ways the public can’t fully digest,” he says. “But a voter—a senior or a person with a disability—can feel when the governor says they have to drive 100 miles round-trip to drop off their mail ballot in person. When it’s thrown in your face like it has been this election season, voters are responding by saying, ‘I’ll show you,’ and coming out in record numbers to have their voices heard.”

Beto O’Rourke often said in 2018 that Texas was “not a red state; it’s a non-voting state.” This could be the year that changes. Harris County Judge Lina Hidalgo, the county’s top executive and a 29-year-old Latina, says that “voters in Texas are used to the steady drumbeat of suppression,” which has often kept turnout among voters of color and young voters low. But she called Abbott’s declaration limiting mail drop-off locations “the straw that broke the camel’s back.”

“It was so transparently about suppression,” she said. “We’re seeing folks who are fired up specifically because they want to stand up against suppression attempts.”

“Voters are responding by saying, ‘I’ll show you,’ and coming out in record numbers to have their voices heard.”

Cheryl Dade, a 68-year-old makeup artist from Houston, voted on the first day of early voting at NRG Arena, the Houston Texans stadium, which has been converted into a polling location. “I’ve been voting for over 45 years and this is the most important [election],” she told MSNBC. “I just feel like our voices are trying to be suppressed.”

Harris County was able to harness this backlash against suppression by taking aggressive steps at the local level to make it easier to vote. It increased its election budget from $4 million in 2016 to $33 million in 2020, tripled the number of early voting locations, set up drive-through voting for the first time in Texas history, converted sports arenas into polling sites, and extended polling hours, even opening a 24-hour polling location starting next week for shift workers and essential workers. All this means that voters have lots of options to turn their frustration at suppression into votes.

The record level of early voting in Harris County could be a microcosm of what’s happening across the county. Trump’s actions to undermine fair elections in order to hold onto power—sabotaging the Post Office, undermining mail voting, encouraging his “army” of poll watchers to challenge Democrats at the polls, refusing to commit to accepting the election results if he loses or to a peaceful transfer of power—may be part of the reason Democrats are casting their ballots early in historic numbers. “We’ve got to vote early, in person if we can,” Michelle Obama urged in her Democratic National Committee speech. “We’ve got to request our mail-in ballots right now, tonight, and send them back immediately and follow up to make sure they’re received. And then make sure our friends and families do the same.”

Fifty-one million Americans have already voted, exceeding the total number of early votes cast in 2016, and Democrats have returned nearly twice as many ballots as Republicans in the 19 states that release voting data by party, according to Michael McDonald of the University of Florida. A quarter of ballots have been cast by people who didn’t vote in 2016, and these voters lean Democratic by 16 points, according to Tom Bonier, CEO of TargetSmart, a Democratic data firm. “The surge of new voters is benefitting Democrats by fairly large margins,” Bonier says.

Of course, it’s risky to read too much into early voting data without knowing what will happen on Election Day. Democratic turnout is up in Harris County—particularly among Hispanics, Asian Americans, and young voters—but Republicans are turning out in record numbers too, not just in Harris County but across Texas.

And the record turnout doesn’t mean voter suppression isn’t having an impact. Mother Jones documented 29 different ways Republicans are making it harder to vote this year. Election officials rejected more than half a million mail ballots during the primaries, a number that is likely to rise in November. Conservative-dominated federal courts have issued a series of rulings limiting mail voting options in battleground states. In North Carolina, mail ballots cast by Black voters are being rejected at four times the rate of whites, while in Florida, a GOP law requiring people with past felony convictions to pay all fines and fees before voting disenfranchised more than 700,000 people. “Suppression has real-world impacts,” says Lauren Groh-Wargo, CEO of Fair Fight Action. “Some people may be fired up to overcome it, but how many others are scared and confused and don’t show up?”

But it’s also true that Democrats and the media are talking much more about voter suppression efforts in 2020 than they did in 2016, making voters aware of the obstacles to voting and how to combat them. “We talk about voter suppression all the time,” says Cliff Albright, co-founder of Black Votes Matter, which works to increase Black turnout in the South. “But it’s always followed with: We’ve got the power to overcome this.”

Like Texas, Georgia has a history of suppression that is motivating voters to cast their votes early. Matt Stevens, a 40-year-old entrepreneur in Atlanta, said he showed up on the first day of early voting because of the “horror stories” from the state’s 2018 gubernatorial race, when long lines in Black neighborhoods, shuttered polling places, and rejected registrations helped prevent Democrat Stacey Abrams from becoming the country’s first black woman governor. (Groh-Wargo managed Abrams’ campaign.) “Knowing that history and the importance of this election, I wanted to get my early vote in,” Stevens said.

When he showed up at his polling place in suburban Fulton County at 9:35 a.m. on October 13, he saw a long line of mostly Black voters stretched around the government building. “I think people are seeing what’s happening in Georgia,” he said, “and it’s encouraging them to check their registration, to get out there early.” He waited 5 hours and 7 minutes to vote—he checked his time of arrival and departure, knowing that the wait would be long—but never thought about leaving. (Some voters waited up to 11 hours to cast a ballot.)

“Your vote is your voice,” he said, just after voting. “I learned that today.”