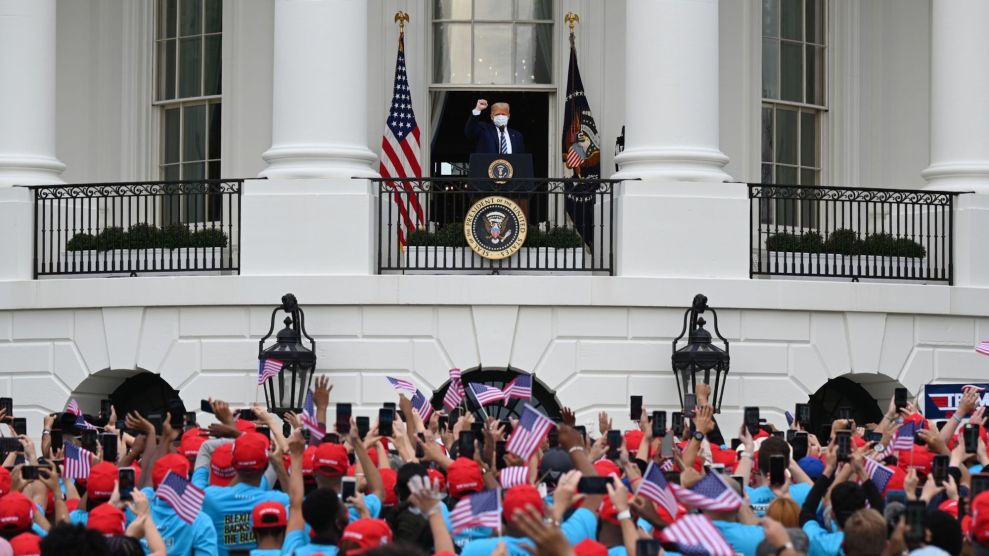 Trump delivering a campaign speech from the White House balcony to supporters on Saturday.Erin Scott/CNP/ZUMA

Barely over a week after President Donald Trump tested positive and was hospitalized for COVID-19, he spoke for 17 minutes from a balcony, maskless, to roughly 500 supporters packed tightly beneath him on the White House’s South Lawn.

The event, which gave the president a desperately-sought venue after days away from the public, had the same appearance, tone, and apparent goals of any campaign rally. Even so, White House spokesperson Judd Deere had earlier insisted to reporters that it was “an official event,” not a campaign event, and that no campaign staff would be involved.

The maneuvering called to mind how Trump used the White House, a federal government facility, during August’s Republican National Convention as a backdrop for several highly choreographed and video streamed segments, and as the site of his keynote address accepting renomination by the party. Federal law generally prohibits the use of government property or resources by officials for campaigning or other purely political activity. Trump did it anyway.

It was illegal for Donald Trump to hold his nominating convention at the White House in August.

And it is morally bankrupt for Donald Trump to hold another super-spreader rally at the White House today.

The law and ethics don’t matter to this President. Nor does our health.

Sarturday’s event was hosted by Blexit, a group boosting African American Trump supporters that was cofounded by Candace Owens. Blexit paid for the travel of some audience members, according to ABC News.

Trump’s words to the admiring crowd left little ambiguity about whether he was conducting politics. “We gotta vote these people into oblivion,” he said. “Into oblivion. Gotta get rid of ’em. So bad for our country.”

“This is the single most important election in the history of our country. Get out and vote, and I love you,” he added, to a crowd that regularly interrupted his remarks with cheers and applause.

In August, Walter Shaub, the director of the United States Office of Government Ethics from 2013 and 2017, railed against Trump’s Republican National Convention speech from the White House, warning then that it was “a harbinger” of things to come.

This abomination may be the most visible misuse of official position for private gain in America’s history. It is an abuse of the power entrusted to this man, the breach of a sacred trust. It is the civic equivalent of a mortal sin—maybe a religious one too. And it is a harbinger pic.twitter.com/UryxiQTyv0