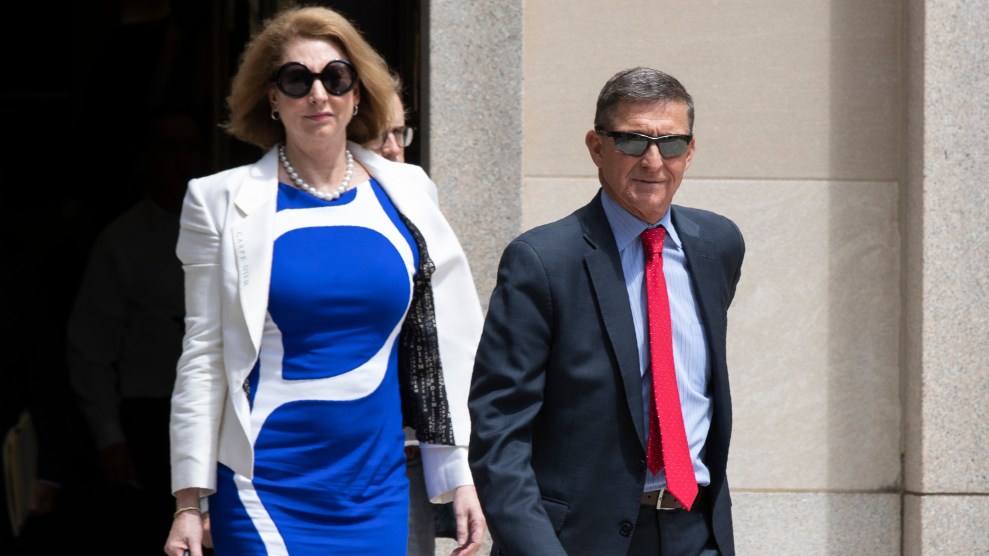 Sidney Powell, an attorney for former national security adviser Michael Flynn, is using bogus and outlandish claims about election fraud to raise money for what she says is an effort to overturn Joe Biden’s victory through litigation.

Trump identified Powell on Saturday as part of a legal team, led by Rudy Giuliani, that is helping him challenge election results in key states he lost to Biden. But that wasn’t Powell’s first involvement in post-election controversy. Earlier last week, Powell used a Fox Business appearance to solicit donations to a new nonprofit entity. Appearing last Tuesday on Lou Dobbs’ show, she directed viewers to a website for an organization called the Legal Defense Fund for the American Republic. “People can donate to the fund because I want this fraud fully prosecuted on behalf of the voters and the American people that deserve election integrity and to know that their legal votes count and were not eradicated by fraud or by illegal votes of other people,” she told Dobbs. “And it’s just gonna take a much more vigorous effort than I see being conducted right now.”

The website, which accepts credit card donations, appears to have gone online the day Powell appeared on Dobbs’ show. Until Thursday morning, according to the Internet Archive’s Wayback Machine, it stated: “Over $500,000 must be raised in the next twenty-four hours for these suits to be filed.” It contained no explanation of why the organization needed $500,000 to proceed. The website was subsequently altered to read: “Millions of dollars must be raised to defend the Republic as these lawsuits contiue [sic] to be filed to ensure victory.” (The typo was later fixed.) The website contains little information about the group, but an automated email response said the organization is a 501(c)(4) group—a tax-exempt nonprofit that promotes social welfare.

Mother Jones reached out repeatedly to Powell and to Robert Matheson, a self-described “brand architect” whose company is listed as the server administrator for the website. Matheson is also a director of the Foundation for the American Republic, a Virginia-based organization with a similar website design to the one Powell promoted. Neither responded to questions.

While her foundation raises money, Powell has made a series of wild claims about voter fraud, including in a slew of appearances on Fox News and Fox Business. (She does not appear to have directly solicited donations in television appearances since she was announced as part of Trump’s legal team late last week.)

On Sunday, Powell asserted that Biden backers used a secret algorithm to switch votes compiled by electronic voting machines made by Dominion Voting Systems. Powell said that technology firms, social media companies, and the news media were part of the conspiracy and that votes may have been altered remotely from Venezuela and Germany. She suggested the CIA knows the machines are vulnerable to fraud but had ignored the issue because the agency itself has used them “for its own benefit in different places.” CIA Director Gina Haspel “should be fired immediately,” Powell said.

That is one of multiple Fox hits and hundreds of tweets in which Powell has promoted bizarre conspiracy theories. She has referenced a particularly outlandish theory that software supposedly developed by the CIA was used to change election results. Versions of these various claims have been extensively debunked.

are fighting to HIDE the #Truth-not to mention the #CIA #FBI and other officials in our government. #TV & many multi-national interests, countless politicians in this country & around the world are BOUGHT or bought their seats in one way or another–or blackmailed@POTUS #Kraken pic.twitter.com/Stfl9LFKKu

Dominion has repeatedly denied the baseless allegations leveled by those on the right. “Vote deletion/switching assertions are completely false,” the Colorado-based company said in a November 17 statement. A joint statement issued by the Homeland Security Department, various election monitoring organizations, and state electoral officials also rebutted the claims. “There is no evidence that any voting system deleted or lost votes, changed votes, or was in any way compromised,” the organizations said. On Tuesday, Georgia’s Republican secretary of state released the results on a forensic audit; it found “no evidence” that Georgia’s Dominion voting equipment had been tampered with and “no signs of cyber attacks or election hacking.”

None of this has deterred Powell, whose claims have been amplified by Giuliani, Trump, and Rep. Matt Gaetz (R-Fla.). The president has “become personally obsessed with the baseless Dominion claims,” according to the Washington Post.

Powell so far has presented no direct evidence for her allegations, though she claims to have information from “various whistleblowers” supporting some of these claims. In an appearance Monday on Dobbs’ show, Powell read from what she said is an affidavit from a “first-hand witness, a high ranking military official,” alleging that the regimes of late Venezuelan President Hugo Chavez and his successor, Nicolás Maduro, used election software from another private company, Smartmatic, to alter votes in that country. Those allegations did not directly involve the 2020 election in the United States.

An attorney involved in Trump’s legal maneuvering said that Powell, while advising Trump’s legal team, is also “running a parallel track effort singularly focused on the Dominion matter.” The attorney said Monday that members of the Trump team were surprised Powell had not already filed lawsuits related to electronic voting on Monday but expected them soon. “We’re running out of time,” the attorney said.

It’s not clear how much money Powell’s group has raised. As of Tuesday, Mother Jones could not find any indication that Powell’s Legal Defense Fund for the American Republic had played an official role in any of the scores of lawsuits filed by Trump allies challenging or questioning election results.

A Dallas-based federal appeals court lawyer, Powell boot-strapped her way to the president’s legal team by working for the last four years to bolster his false claims that he has been targeted by “deep state” operatives. Powell capitalized on her onetime work for a client convicted as part of the Enron scandal, establishing a brand as a vocal critic of Andrew Weissmann, the former head of a task force of federal prosecutors charged with investigating that scandal. After special counsel Robert Mueller hired Weissmann to assist in investigating Trump’s Russia ties, Powell emerged as a fierce Mueller critic, hawking anti-Mueller tee-shirts and launching attacks on his investigation in Fox News hits and op-eds.

In 2019, Powell convinced Flynn to hire her in place of attorneys who had negotiated a 2017 plea deal under which Flynn had promised to cooperate with Mueller. Powell used Flynn’s case to bolster Trump’s baseless and false claims that the Obama administration had orchestrated charges against Flynn in an effort to weaken Trump. While Flynn has embraced and enjoyed adulation from adherents of the QAnon conspiracy theory—which holds that Trump is waging a war on a cabal of elite, liberal pedophiles—Powell has, less overtly, egged on QAnon adherents, retweeting QAnon-linked accounts and using hashtags associated with the conspiracy theory. On Monday night, Powell retweeted 10 tweets from an account with a QAnon reference in its biography. She’s also amplified conspiracy theories pushed by Alex Jones and false claims that George Soros owns Smartmatic.

Powell’s claims that Flynn was framed won her direct access to Trump and encouraged Attorney General Bill Barr to intervene in the case to try to drop the charges against Flynn. Her efforts have so far fallen short in court. Federal District Court Judge Emmet Sullivan has dismissed and excoriated her arguments and has refused to let the DOJ withdraw the charges.

But while that case continues, Powell seems to be using a similar conspiracy theory-filled playbook as she raises money from Trump backers in an attempt to overturn the election. Campaign finance lawyers say her group’s fundraising appears to be legal. The IRS imposes few restrictions on 501(c)(4)s, so long as organizers use the money they bring in for some public purpose. The Trump campaign itself is raising money from supporters hoping some legal miracle will keep him in office, while actually using most of the money to pay down campaign debt and finance a new political action committee Trump founded. Like Powell’s efforts, the Trump campaign’s fundraising probably does not violate the law. But these initiatives also employ deeply dishonest claims to draw donations from Trump’s most ardent fans.

“Donor beware,” says Paul S. Ryan, a campaign finance expert with the nonprofit group Common Cause. “These groups seem to be capitalizing on misinformation, and there are few restrictions on what they do with your money.”

“Solicitations like Powell’s and Trump’s,” Ryan adds, “are problems because the underlying litigation is meritless and has no chance of changing the outcome of the election.”