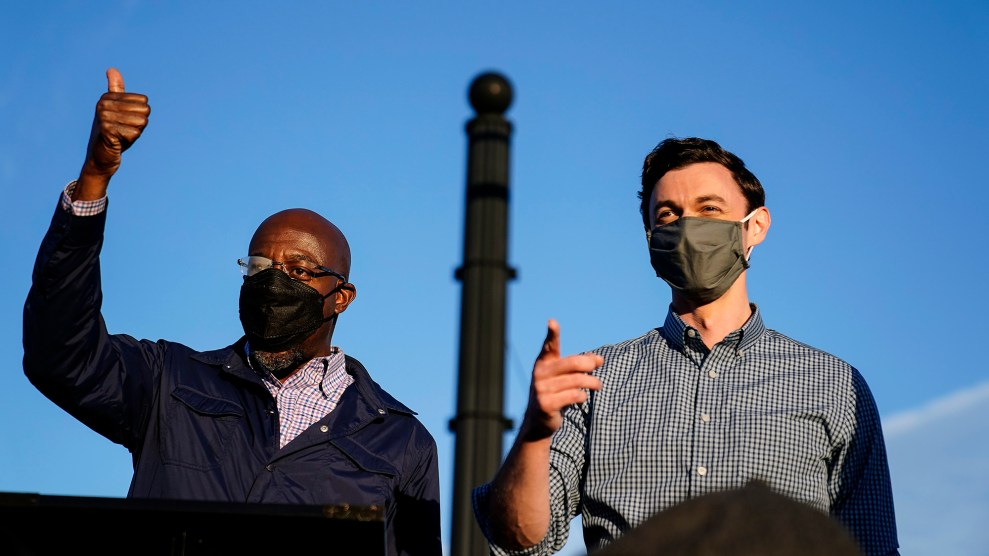 Georgia Democratic candidates for US Senate Raphael Warnock and Jon Ossoff at a campaign rally on November 15, 2020, in Marietta, Georgia.Brynn Anderson/AP

On a surreal day marked by violence and chaos spurred by Trump-supporting insurrectionists on Capitol Hill, Democrat Jon Ossoff officially won a tight runoff election against incumbent Republican Sen. David Perdue in Georgia, according to ABC and NBC. His victory, along with that of the Reverend Raphael Warnock, who officially defeated Republican Sen. Kelly Loeffler in the early hours of the morning, ensures Democrats will control the US Senate and makes way for the Biden administration to pursue its ambitious legislative agenda.

Warnock and Ossoff have been elected to represent Georgia in the Senate after a pair of agonizingly close campaigns. Both races went to a runoff when the candidates failed to surpass the 50 percent threshold in the November general election. The Democrats’ historic double victory will officially split the party breakdown of the Senate, with Vice President–elect Kamala Harris serving as a tie-breaking vote. Sen. Mitch McConnell, who for years has stymied the Democratic-controlled House’s efforts to pass progressive legislation, will assume a new title: Senate minority leader. Sen. Chuck Schumer will now take the gavel.

Ossoff claimed victory earlier Wednesday morning, when he was leading Perdue by about 16,000 votes. At 33 years old, Ossoff is the youngest Democrat elected to the Senate since President-elect Joe Biden took office at age 28 in 1973. He will also be Georgia’s first Jewish senator.

But, in a state where nearly a third of the population is Black, Warnock’s victory is particularly poignant. As Becca Andrews reported yesterday, Warnock will be Georgia’s first Black senator, and the second Black senator to represent the South since Reconstruction.

The Democratic victory, though, was largely overshadowed by the chaotic events at the Capitol, which had at least temporarily halted the certification of Joe Biden’s Electoral College victory. As our colleagues write:

Insurrectionists aiming to overturn the result of the 2020 presidential election sent Washington, DC, into chaos on Wednesday, storming past police barricades into the Capitol building and shutting down a congressional session intended to formally certify Joe Biden’s victory. Inside the House of Representatives chamber, a protester screamed, “Trump won that election!” from the dais.