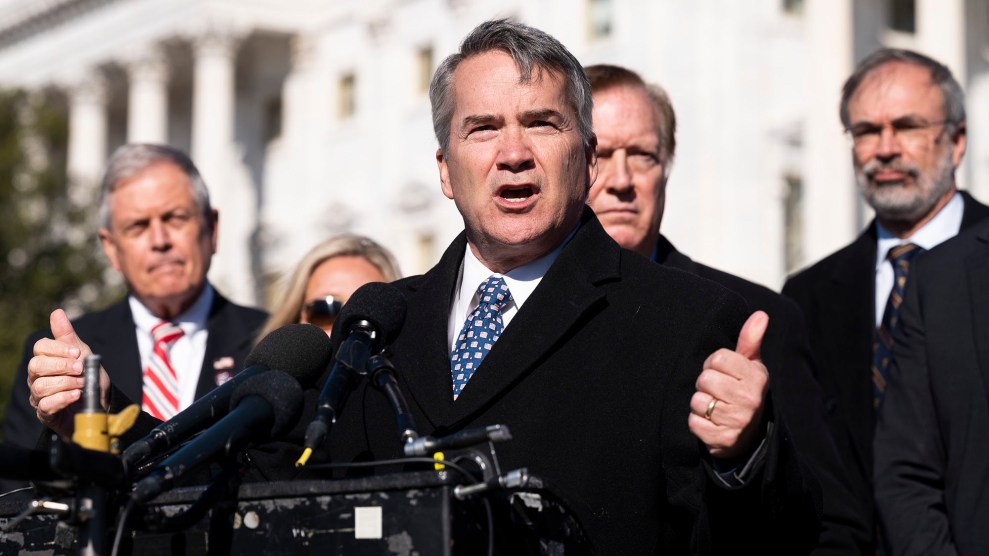 Ever since Brad Raffensperger refused to go along with Donald Trump’s attempt to steal the 2020 election, the former president has had it out for Georgia’s Republican secretary of state. Raffensperger, whom he had endorsed for the job just a few years earlier, was an “enemy of the people,” Trump said in November. He even went after a totally different guy named Ron Raffensperger, who he thought was Brad’s brother, but is not related at all. So it didn’t come as a major shock on Monday when Trump issued his first big endorsement since leaving office—of Raffensperger’s new primary opponent, Rep. Jody Hice.

“Unlike the current Georgia Secretary of State, Jody leads out front with integrity,” Trump said in a statement through his new campaign organization, Save America PAC.

That’s one way of putting it. While Raffensperger balked at Trump’s post-election pressure campaign, Hice was a leading proponent of Trump’s attempted coup. After a pro-Trump mob sacked the Capitol, Hice voted to reject the slate of electors from Pennsylvania and Arizona. He also signed onto the amicus brief supporting a lawsuit to throw out Biden’s electoral college victory.

Secretary of state is an unglamorous position. It’s bureaucratic—usually not a logical step for a congressional gadfly. Hice’s primary impetus for running appears to be that he’s mad that the current holder of the office did his job. But Hice isn’t just a congressional lackey who supported ending constitutional governance because he wanted to impress a real-estate grifter—he’s also a very accomplished crank in his own right. Back when he was first running for the House in 2014, I read his book, It’s Now or Never: A Call to Reclaim America.

It’s a very illuminating tract. Hice supported the ability of states to nullify federal laws, citing a misreading of the 1794 Whiskey Rebellion as justification. He also wrote that abortion rights supporters were worse than Hitler.

“Our murderous dealings are much worse than Hitler’s six million Jews or Mussolini’s three hundred thousand,” Hice wrote. “The genocide in America is inexcusable! It is worse than genocide. We are guilty of eugenics!”

Like Trump, he harbored bigoted views of Muslims, whom he said should not be afforded religious freedom protections.

“Although Islam has a religious component, it is much more than a simple religious ideology,” he wrote. “It is a complete geo-political structure, and as such, does not deserve First Amendment protection.”

The essence of the book, and of Hice, came about a quarter of the way through, in a long passage on LGBTQ equality (or as Hice put it, “The Gay Rights Agenda: Destroying America”). Although he graciously conceded that “many are productive and law-abiding citizens,” he quoted at length from a gay writer he believes represents the “overall agenda of militant homosexuality”:

We shall sodomize your sons, emblems of your feeble masculinity, of your shallow dreams and vulgar lies. We shall seduce them in your schools, in your dormitories, in your gymnasiums, in your locker rooms, in your sports arenas, in your seminaries, in your youth groups, in your movie theater bathrooms, in your army bunkhouses, in your truck stops, in your all male clubs, in your houses of Congress, wherever men are with men together. Your sons shall become our minions and do our bidding. They will be recast in our image. They will come to crave and adore us.

The quote was satirical.

Hice has applied this same level of rigor to his current job in Washington. At a hearing on Monday on statehood for Washington, DC, he said that the district was unqualified for such status because it did not have any car dealerships. Actually, it has many.

Fact check: There are car dealerships in DC. https://t.co/7nLlvqWy3Z