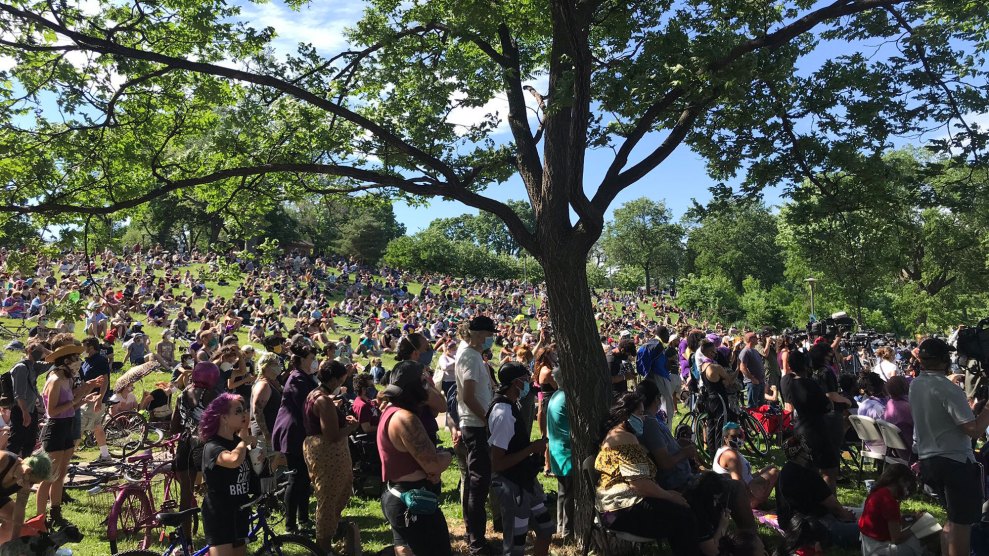 A large crowd gathered for a community meeting in Powderhorn Park in Minneapolis on Sunday.Julia Lurie/Mother Jones

At a community rally at Powderhorn Park this afternoon, 9 of Minneapolis’ 12 city councilmembers showed up and pledged to dismantle the city’s police department, marking a significant shift toward overhauling a force that’s under intense scrutiny following the killing of George Floyd on May 25. Mother Jones reporter Julia Lurie was there:

Three quarters of the Mpls city council – a veto proof majority – are at this community meeting pledging to dismantle MPD. Also, a *massive* crowd” pic.twitter.com/4273LBR8C9

Since Floyd’s death, calls for defunding and downsizing police agencies as a way to curtail police brutality and the overpolicing of communities of color have spread. The intent signaled by the veto-proof majority of Minneapolis lawmakers will be a significant test of how a city can overhaul its police department. Within the last week, Minneapolis Public Schools, the University of Minnesota, and the Minneapolis Park Service broke ties with the city police department, which is being investigated by the state’s Department of Human Rights to determine whether its current protocols amount “to unlawful race-based policing, which deprives people of color, particularly Black community members, of their civil rights.”

City Council President Lisa Bender tweeted on June 4 that the city would work to replace the department with a “transformative new model of public safety.” In a statement to the Appeal, which first reported the move, Bender noted that the city’s “efforts at incremental reform have failed.” In Minneapolis and elsewhere in the United States, Bender wrote, “it is clear that our existing system of policing and public safety isn’t working for so many of our neighbors.”

On Saturday, Mayor Jacob Frey faced was rebuked by demonstrators after he rejected calls to abolishi the police department and instead proposed reforming it.

Demonstrators booed Minneapolis Mayor Jacob Frey out of a rally on Saturday after he declined to commit to defunding the police. Read more about the protests in the U.S. here. https://t.co/zHv8ocIPXj pic.twitter.com/8WPMnyFXjP

It’s unclear what dismantling the Minneapolis police department will look like going forward. Steve Fletcher, a City Council member in Minneapolis’ Third Ward, wrote in an op-ed for Time that he among others supported an effort to “disband our police department and start fresh with a community-oriented, non-violent public safety and outreach capacity.” “Our city needs a public safety capacity that doesn’t fear our residents,” Fletcher wrote. “That doesn’t need a gun at a community meeting. That considers itself part of our community. That doesn’t resort quickly to pepper spray when people are understandably angry. That doesn’t murder black people.”