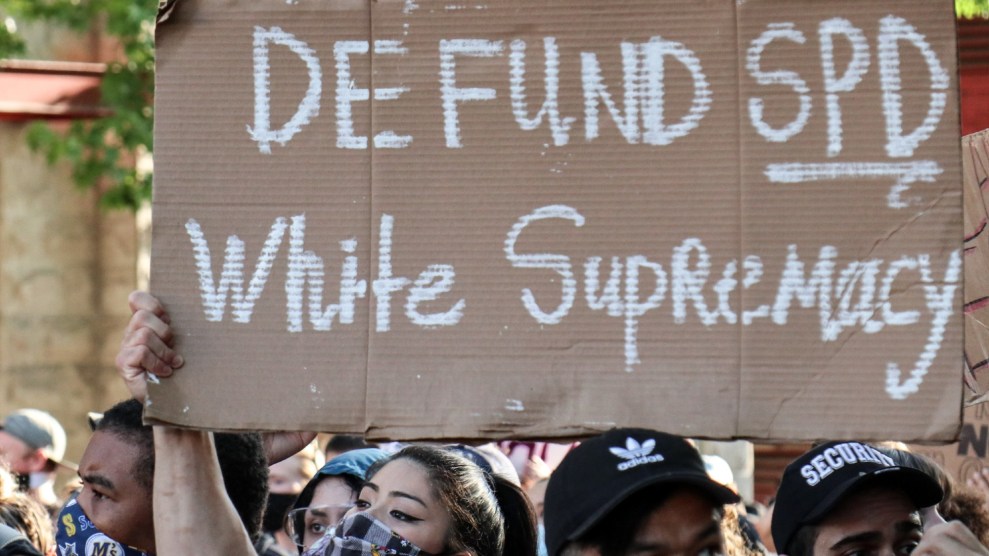 On Sunday, when a veto-proof majority on its city council pledged to disband the city’s police department, Minneapolis made American history.

Council members have so far talked about defunding Seattle’s troubled police department by up to 50 percent. But today, Seattle City Council President Lorena González told me that she’ll “see if we can get a veto-proof proposal to follow the lead of the Minneapolis City Council”—meaning tomorrow afternoon, when the council’s budget committee is set to meet.

Seattle has seen some of the most striking and extensive instances of police violence captured on video in the last week, and three of nine city council members have demanded Mayor Jenny Durkan’s resignation, including budget committee head Teresa Mosqueda.

Durkan also faces calls to resign from Washington’s biggest private-sector union, at least a third of her city council, and a long list of top Democrats across the state. An open letter calling on the mayor to step down over her handling of the protests has been signed by more than 14,000 members of the public, almost all identifying as Seattle residents.

Like eight of nine council members, Durkan is a Democrat. She’s also a former federal prosecutor, notorious among activists for hiring a five-time-convicted rapist and child molester to infiltrate community organizers’ barbecues. (“It’s not the saints who can bring us the sinners,” Durkan said at the time.) Her resistance to police reform, let alone defunding, hasn’t won her any praise from critics; under Durkan, the city filed to end a federal consent decree reforming its police department, a filing she now says she’ll withdraw.

In the last two weeks, as social media has become a firehose of police violence footage, the Seattle Police Department has been responsible for some of the most striking attacks yet, including allegedly pepper spraying a small child in the face:

Then refused to give his badge number. pic.twitter.com/4ZEOblXWnj

Including guarding an armed man who allegedly drove his car into a protest for George Floyd and shot a 26-year-old Black protester who tried to disarm him:

Spent all week looking at footage of cops beating the shit out of protesters & spraying them with pepper spray for protesting.

Here's how Seattle police responded to a guy who drove his car into a crowd of protesters and ran into the crowd with a gun. pic.twitter.com/EfchjtVc0t

And including tear-gassing Seattle’s Capitol Hill neighborhood so thoroughly that it allegedly filled nearby apartments, sickening a man’s three-month-old child, in defiance of the citywide “pause” on gas:

“My 3mo-old son … who was sleeping, was awoken from his sleep coughing, crying, spitting out mucus,” he said, telling the council he and his wife and son fled in their car. “Mucus was bubbling out of his nose, he was bright red. … My wife had to pour breast milk on his eyes.”

That 30-day “pause” on tear gas—actually ordered by Durkan’s police chief, not Durkan herself—took less than 48 hours for Seattle police to defy. The chief, Carmen Best, was apparently allowed to call for exceptions, and did it so promptly that there was effectively no “pause” at all.

(Monday’s rally in Seattle’s Capitol Hill neighborhood was the city’s first without credible reports of violence; it was also the first without police present.)

Now, Durkan finds herself in the same bind as Minneapolis mayor Jacob Frey: her city council has gotten out ahead of her. Frey was jeered out of a rally when he wouldn’t commit to defunding Minneapolis’s infamous police, as captured in a headline-grabbing video; at the same rally, his city council quickly delivered a veto-proof majority committed to disbanding their police.

González says there’s “overwhelming” support for defunding among her colleagues. “Whether or not there’s enough appetite to go the step further and dismantle is still unclear to me,” she says. “But I will be taking seriously the charge of making the case, both publicly and to my colleagues, as to why we need to radically reimagine how we deliver public safety to the people of Seattle.”

Socialist Alternative council member Kshama Sawant has said she’ll bring articles of impeachment against Durkan, an unprecedented but relatively easy step in Seattle: the mayor gets five days’ warning before a hearing where six of nine council members must vote to impeach. The grounds: “any willful violation of duty, or for the commission of an offense involving moral turpitude.” Those six votes might not be out of reach for Sawant, who has fellow councilors Mosqueda and Tammy Morales on her side and two more seemingly on the fence.

González was more wary of impeaching Durkan, arguing that the evidence isn’t yet there. “Impeachment is a serious process to undergo, and we have to ensure that it would be successful and that the record is clear,” she says. “If the evidence becomes available, or we become aware of it, I think we would have to have a conversation about moving forward with impeachment.”

As in Minneapolis, a public commitment to defunding police is coming from councilors who previously believed in reform. González, a former civil rights attorney, says she was long a reformer—but by deploying “massive amounts of excessive force in demonstrations about excessive force,” Seattle’s police didn’t help their case.

A veto-proof vote to disband would be a bitter rebuke to Durkan, whose last veto was met with an override, and who threatened but didn’t follow through with a veto on Sawant’s recent bill to ban most evictions in winter. It would also free up Seattle PD’s budget of more than $400 million—almost a third of Seattle’s general fund, according to local non-profit news outlet Crosscut. And if Minneapolis isn’t a one-off, the message to mayors will be clear: time to catch up.