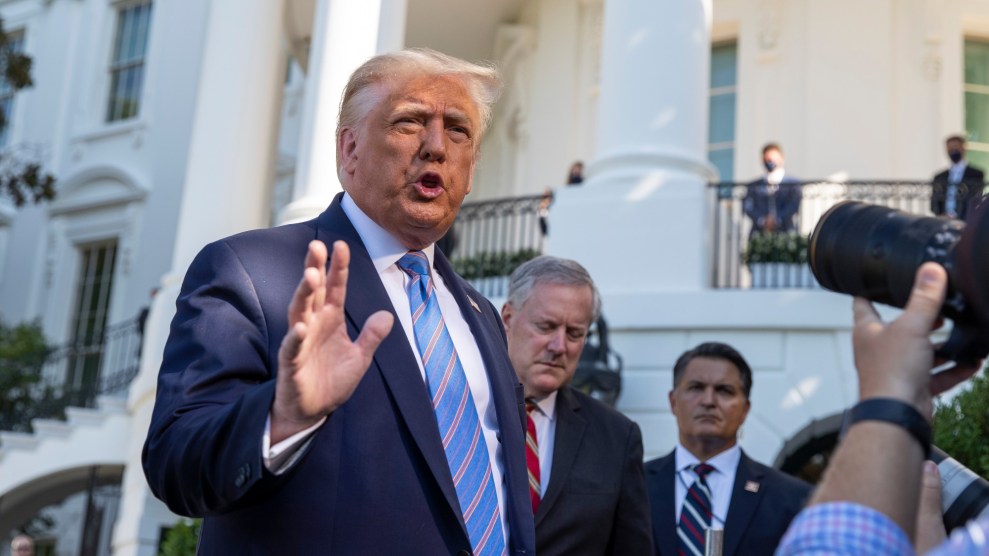 President Donald Trump speaks with reporters as he walks to Marine One outside the White House en route to Texas Wednesday.Alex Brandon/AP

President Donald Trump said Wednesday that federal agents will “go in and clean it out” Portland, Oregon, if state and local officials don’t “secure their city soon”—a threat apparently prompted by Oregon’s governor announcing that federal forces would soon start withdrawing from the city.

“You hear all sorts of reporting about us leaving,” Trump told reporters outside the White House. “We’re not leaving until they secure their city. We told the governor, we told the mayor: Secure your city. If they don’t secure their city soon, we have no choice. We’re gonna have to go in and clean it out. We’ll do it very easily. We’re all prepared to do it.”

Trump also said that many “anarchists and agitators” have been arrested in Portland and that “it’s gonna be a long sentence.”

Trump’s remarks came after Oregon Gov. Kate Brown (D) announced that following her repeated requests, “the federal government has agreed to a phased withdrawal of federal officers” who have been deployed in Portland for several weeks. Both Brown and Chad Wolf, the acting head of the Department of Homeland Security, said Wednesday that they had agreed on a plan that involved federal agents leaving Portland. But they made differing claims about the details.

Brown said talks with Vice President Mike Pence and other administration officials this week led to an agreement that beginning Thursday, Customs and Border Protection and Immigration and Customs Enforcement officers “will leave downtown Portland, and shortly thereafter will begin going home.”

Officers from those two agencies, which Wolf oversees, have been deputized to help the Federal Protective Service, also part of DHS, protect the Hatfield Federal Courthouse in the city, which has been the target of vandalism and arson attempts amid ongoing protests that began two months ago after the police killing of George Floyd in Minneapolis.

Federal agents, however, have been captured on video blocks away from the courthouse arresting protesters—allegedly without identifying themselves, in some cases. Those actions have drawn a national outcry and swelled the number of protesters participating in nightly demonstrations in the city from hundreds to thousands. Oregon’s attorney general and the American Civil Liberties Union have launched multiple lawsuits alleging federal officers are exceeding their constitutional authority in Portland. Inspectors general at DHS and the Justice Department have launched investigations into federal actions in the city.

Brown and Portland Mayor Ted Wheeler say protests in the city are largely peaceful but that the feds are worsening the situation. “These federal officers have acted as an occupying force, refused accountability, and brought violence and strife to our community,” Brown said Wednesday.

The federal agents, decked out in military fatigues, have by almost all accounts intensified the situation in the city. Many demonstrators say they took to the streets in Portland to protest the federal presence there. Some people have reportedly thrown fireworks, bottles, and other objects at officers. “A number of federal officers have been injured, including one severely burned by a mortar-style firework and three who have suffered serious eye injuries and may be permanently blind,” Attorney General Bill Barr told the House Judiciary Committee Tuesday.

Federal agents, for their part, have used tear gas, pepper spray, and “crowd-control munitions” on demonstrators. Earlier this month, a federal agent fired an impact munition that fractured a protester’s skull.

Brown said that Oregon state police will replace the CBP and ICE agents in assisting a “limited contingent of Federal Protective Service” officers, who are permanently stationed in the city and will remain. It’s not clear exactly how many federal agents are currently involved. The Oregonian reported Wednesday that 114 officers from CBP and the US Marshals Service have been deployed around the courthouse. Brown did not say if the Marshals, who are part of the Justice Department, will also leave Portland.

Wolf confirmed in a statement Wednesday that the feds had reached an agreement with Brown on “a joint plan to end the violent activity in Portland” that included state police replacing DHS personnel in local law enforcement activity.

But Wolf, who has struck a confrontational stance toward elected officials in Portland, claimed DHS agents would only leave once “the violent activity toward our federal facilities ends. We are not removing any law enforcement while our facilities and law enforcement remain under attack.”

Trump went even further. “They either clean out their city and do it right, or we’re gonna have to do it for them,” he told reporters on Wednesday.

Trump’s reelection campaign has touted his deployment of federal officers to various US cities, a bet that his supposed crackdown on cities he falsely depicts as lawless will play well politically. On Wednesday even as feds agreed to pull back in Portland, the Justice Department announced an expansion of “Operation Legend”—an effort supposedly aimed at using federal agents to combat local violent crime—to cities in three swing states: Detroit, Milwaukee, and Cleveland. The DOJ had previously announced a “surge” of agents in Kansas City, Chicago, and Albuquerque to fight crime there.