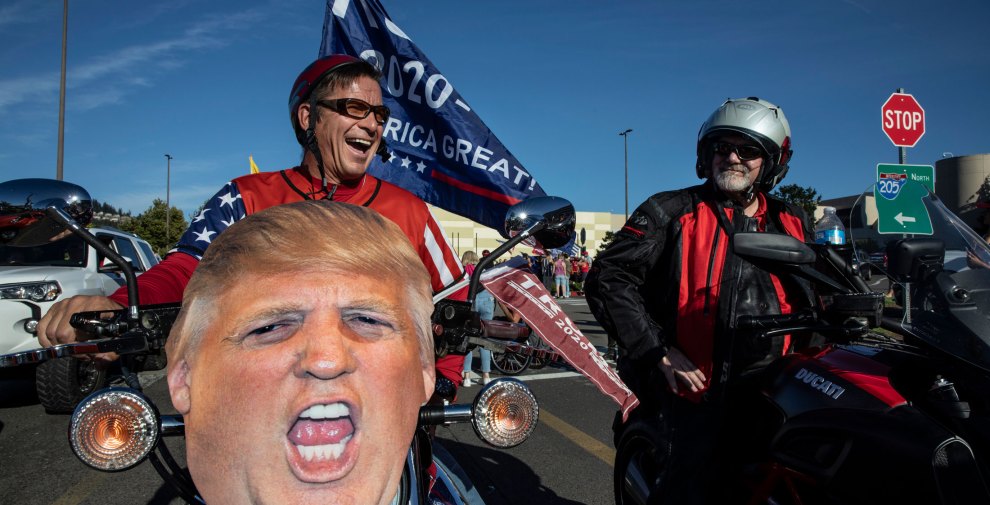 Supporters of President Donald Trump attend a rally and car parade from Clackamas to Portland, Oregon, on August 29.Paula Bronstein/AP

On Sunday morning, as President Donald Trump made his way to his golf course in Sterling, Virginia, he passed a Grim Reaper waving the sign that read “183K”—a reference to the mounting death toll from the coronavirus pandemic.

Hours earlier, instead of focusing on his government’s pandemic response or condemning the killing of a man shot in Portland, Oregon, Trump took to Twitter to champion his supporters and condemn Black Lives Matter protesters as the two groups clashed in the Oregon city on Saturday night.

First, at 4 a.m., he took to Twitter to label Portland Mayor Ted Wheeler a “FOOL” and called on the National Guard to intervene in Portland’s demonstrations. The video featured Trump supporters shooting paintballs at peaceful protesters.

The big backlash going on in Portland cannot be unexpected after 95 days of watching and incompetent Mayor admit that he has no idea what he is doing. The people of Portland won’t put up with no safety any longer.The Mayor is a FOOL. Bring in the National Guard! https://t.co/bM6ypak94t

Then, he cried out to the “GREAT PATRIOTS,” a caravan of Trump supporters headed to demonstrations in Portland:

At 6:49 a.m., Trump then retweeted a misleading claim that simply reinforced his warped view that all of the so-called “unsafe” cities are led by Democrats.

The truth, of course, is more complicated. “Murders are also up in Jacksonville and Miami, both of which are overseen by Republican mayors and a Republican governor. And this is all happening under Trump’s presidency,” Vox‘s German Lopez wrote. “The trend doesn’t appear to be partisan.”

A few minutes later, Trump responded to a tweet by National Review editor Rich by calling on DC Mayor Muriel Bowser to “arrest these agitators” or else the “Federal Government will do it for you.” The video Lowry shared features Black Lives Matter protesters in the nation’s capital blocking traffic while protesting in the streets.

.@MayorBowser should arrest these agitators and thugs!Clean up D.C. or the Federal Government will do it for you. Enough!!! @MayorBowser https://t.co/45RzrDqw1q

On Saturday night, the White House announced that Trump would visit Kenosha, Wisconsin, as demonstrations unfolded in the streets. But on CNN’s State of the Union on Sunday, Rep. Karen Bass of California saw through the purpose of the visit as a means to “to agitate things and make things worse.”

Democratic Rep. Karen Bass says she thinks President Trump's upcoming visit to Kenosha has "one purpose and one purpose only, and that is to agitate things and to make things worse" https://t.co/hmSUc0IwQH #CNNSOTU pic.twitter.com/ov4o9jynAa

In yet another sign of how Trump is fixated on gaining support, no matter how stained the source, he “liked” a tweet commending 17-year-old Trump supporter Kyle Rittenhouse, who was charged with killing two men and injuring another during protests in Kenosha, Wisconsin, over the police shooting of Jacob Blake. Trump dodged a question about Rittenhouse on Saturday, telling a reporter: “We’re looking at it very, very carefully.”

The president liked a tweet that says accused Kenosha killer Kyle Rittenhouse “is a good example of why I decided to vote for Trump.” pic.twitter.com/l0qvMIkB7C

And it wouldn’t be a typical Sunday morning in the Trump White House without the president shouting his typical racist dog whistle, one that has become foundational to his 2020 campaign:

The president’s tweets represent a means to an end. His retweets of his supporters shooting paintballs at protesters in Portland serves to instigate the violence-riddled vision of American cities he thinks is true. He leverages his platform to decry anti-racist protesters, frustrated at the near-monthly injustices they are seeing as “agitators” to reinforce the misleading notion that American cities, specifically Democrat-led ones, are unruly and in shambles. It’s a Nixonian message from a time long past that’s meant to sow discontent, to create a chaotic view of American life months before his reelection and depict an unstable society that he believes he alone can fix. Nothing could be further from the truth.