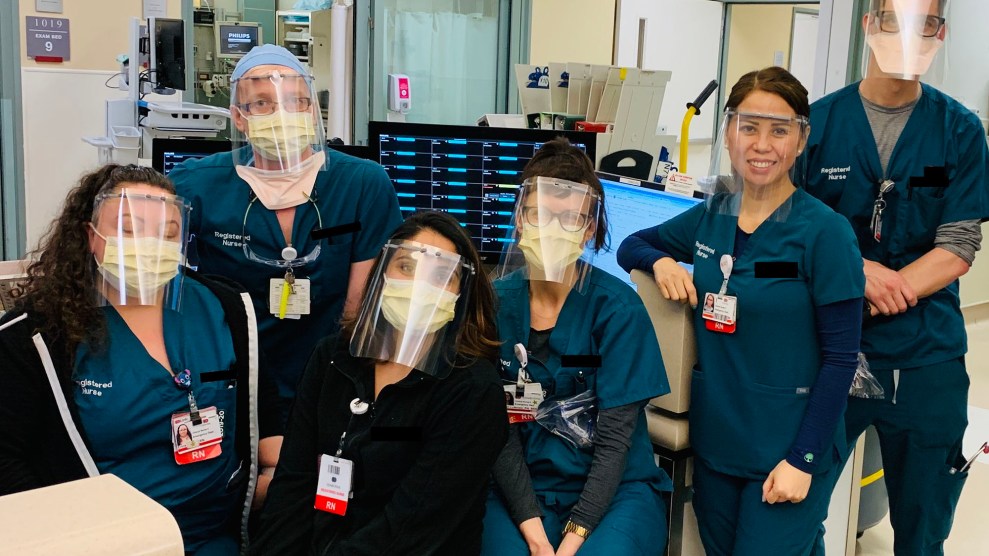 As the novel coronavirus swept the nation, and the film and TV industry production ground to a standstill, Andrew Brinkhaus watched one gig after another dry up. Stuck at home with nothing to do, the Los Angeles camera operator was surfing Twitter one day when he saw someone in Sweden post instructions on how to 3D print a face shield. It piqued his interest. He had seen that doctors and nurses and other emergency responders were struggling to get proper protective gear as they managed an onslaught of coronavirus cases. And he owned a 3D printer.

Brinkhaus, 31, decided to give it a go. Using the Swedish design, he 3D printed a headband and then went out to Office Depot and bought up a bunch of transparency sheets normally used for overhead projectors to make the face shield. He completed his first one on March 24. Since then, his unemployment service project has snowballed into a mini-manufacturing collective that in its first week has printed and donated 1,000 face shields to area hospitals, urgent care clinics, and nursing homes.

After he started making shields at home, Brinkhaus put out a social media call for others to join in the work, using the hashtag #3DAgentsofShield. (I happened to see it because Andrew is my cousin.) As it turned out, a bunch of out-of-work film industry folks also had 3D printers at home, and they came out of the woodwork to contribute. “We now have 18 in our core group, and we have over a dozen people around the country with printers who are printing this file for us,” he told me. “They’re basically printing big batches and shipping them to us. We’re putting that into our inventory, and then we’re shipping those out as fast as we can.”

The orders came by word of mouth. The first was from a local veterinarian. Brinkhaus made 20 for her. But as the medical community got wind of the project, the orders started piling up.  Inquiries are now coming from everywhere from Nicaragua to New York. The 3D Agents of Shield have a backlog of 2,000 orders they are racing to fulfill. Just between 7 am and 9 on Monday, when I interviewed Brinkhaus, he’d gotten orders for 600 more shields. This week, the group created a GoFundMe page that raised nearly $4,000 in its first day, mostly in small donations, that have helped pay for the supplies and shipping. If there’s any money left over when the crisis passes, they plan to donate it to a medical charity.

Brinkhaus has been amazed by the response. “The more this message spreads, the more people say, ‘Hey I’ve got a printer. I want to help,’” he tells me. “The donations have followed suit in the same way. There’s a lot of excitement. We had a mom yesterday reach out because her 15-year-old-son got a 3D printer for Christmas and wants to help.” He says people are motivated by fear, anger and frustration over how the medical professionals are being forced to take care of the sick without proper protective gear.

“It’s just been this unbelievable snowball,” he says. His friends in the film industry have pooled their resources to help even as they’re filing unemployment claims and hoping for a stimulus check. Over the course of just a week, a project that formed in a group text moved into a bigger WhatsApp conversation, and now needs a Discord server to manage, the chat app designed for video gaming communities. Initially, Brinkhaus had created a simple Google doc for people to submit orders. Now, he says, someone in the group has made extensive spreadsheets that are updated in real time to manage supply and demand. Someone else created a website, spending four days in coding hell so that the site can handle all the inventory and shipments. “It’s incredible how much this has grown into a legit operation in a week,” he marvels.

The project is about to scale up again thanks to one member of the group who was in touch with a guy who runs a local sign making shop in the LA area. The shop has a huge CNC machine—an automated machine tool system that can precision-cut materials—that can massively increase their output. “With his big machine, he can do one shield in a minute, whereas our printers take 28 to 30 minutes to print,” Brinkhaus says. But the sign maker needed the raw materials. That’s where the film industry came through again, with something known as “dance floor.”

“When a camera is on a dolly, we’ll put down this plastic sheeting to protect the floor and give us a smooth surface,” Brinkhaus says. “A lot of the guys in motion picture industry own this dance floor in big sheets. They’re now all willing to donate that material.” One four-by-eight piece of dance floor can make nearly 130 masks, he says.

Once the CNC machine gets up and running, Brinkhaus thinks the rest of the collective can shift production to 3D printing much needed respirator masks. He says they make N95 masks with a flexible filament and leave space inside for part of an air conditioning filter, which can keep out particles as small as .3 microns—the level at which the CDC says is useful for protection against the virus.

If fighting coronavirus with air conditioning filters and overhead transparencies sounds a little MacGyverish, that’s because it is. “People are trying to find ways to use something commonly found on the market and repurposing them to do something important and necessary,” Brinkhaus says. He hopes that they will eventually be able to ship both the face shield and the respirators as a package deal to hospitals.

I wondered whether these 3D shields would run into any regulatory problems. Would the CDC sign off on these homemade PPEs? (Or Marvel Comics, for that matter!) “There’s obviously this huge shortage of the necessary equipment,” Brinkhaus says, noting that in a normal situation hospitals probably wouldn’t take his equipment because it hadn’t gone through a rigorous screening. “But these people are in a position where it’s literally no protection or what we’re offering,” he says. “Doctors and nurses are going out of their way to get them because it’s better than nothing.”

His group has tried to standardize its materials using commercial grade plastic, so that their shields can be cleaned, sanitized and used again, unlike some of the other ones he’s seen using foam and a bungee cord, for instance. Only medical facilities are eligible to order. That means not even Brinkhaus’s mom gets one. “I want to be able to say yes to everybody but we just have such a huge queue and such a huge demand already,” he laments. But he says they have to stay committed to the medical professionals “who are face to face with these patients who are sick and who really need ‘em.”