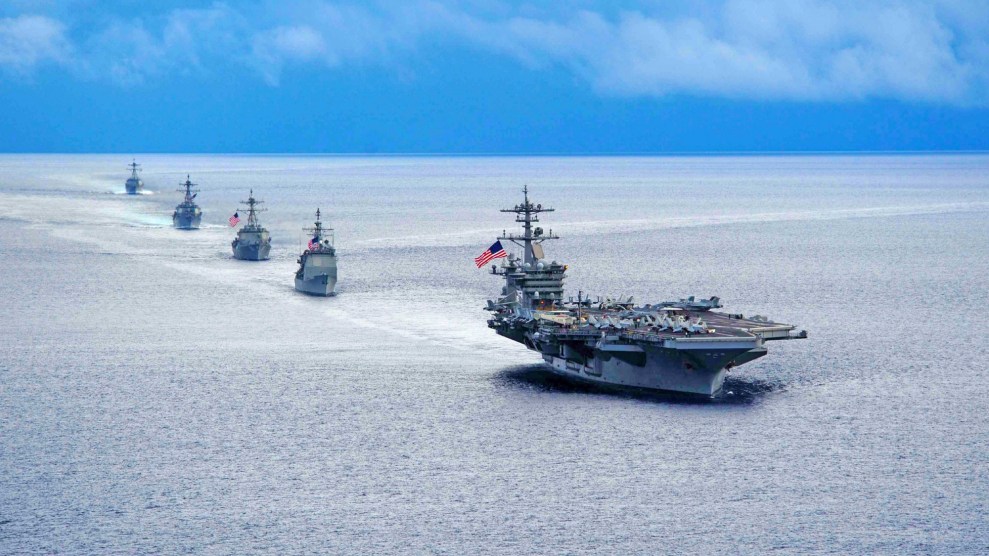 The USS Roosevelt leads a formation of ships during a maneuvering exercise.Universal History Archive/Universal Images Group/Getty

A major coronavirus outbreak on a US aircraft carrier has deteriorated in recent days, sparking a plea for help from a senior Navy official that is all but unprecedented.

More than 100 sailors on the USS Theodore Roosevelt have tested positive for COVID-19, the disease caused by coronavirus, as the ship is docked in Guam with no apparent solution in sight. Captain Brett Crozier, in a four-page letter obtained by the San Francisco Chronicle, said the outbreak was “ongoing and accelerating” and urged Navy leadership to allow most sailors to leave the ship so it can be properly cleansed.

“We are not at war,” he wrote. “Sailors do not need to die. If we do not act now, we are failing to properly take care of our most trusted asset—our Sailors.”

The Navy first revealed on March 24 that three sailors on the Roosevelt had been infected after docking at Da Nang, Vietnam, earlier this month. Its more-than-4,000-person crew was tested for COVID-19 a few days later and the amount of confirmed cases shot up. By Monday, a senior officer on board the ship told the Chronicle that between 150 and 200 crew members had tested positive. Without an immediate intervention from the Navy, that number will surely increase because of the difficulty in effectively quarantining infected sailors who are already living in cramped spaces. Using the Diamond Princess cruise ship, where hundreds of passengers were infected with the virus, as an example, Crozier emphasized that the Roosevelt’s situation was worse—a reality former Navy officials have acknowledged.

“Warships are much more compressed than all stateroom cruise ships,” said retired Admiral James Stavridis, who spent more than three decades with the Navy, including as NATO’s top commander, in a tweet. “Think of your kitchen with a dozen sailors sleeping there. We call them ‘berthing compartments,’ but in this time of corona they will be ‘birthing compartments’—for the virus.”

Crozier’s letter reflected the severity of the crisis in language even veteran defense reporters found unusually stark. Calling the removal of hundreds of sailors a “necessary risk,” Crozier added, “Keeping over 4,000 young men and women on board the TR is an unnecessary risk and breaks faith with those Sailors entrusted to our care.”

Even if the Roosevelt is called into service as part of an ongoing conflict, Crozier’s letter leaves no doubt it would be significantly compromised. “Decisive action is required now in order to comply with CDC and (Navy) guidance and prevent tragic outcomes,” he wrote.

The desperate situation underscores how reluctant top military officials have been to directly acknowledge the impact of America’s worsening coronavirus crisis. Last week, Admiral Mike Gilday, chief of naval operations, released a lengthy statement noting that the Navy was “taking this threat very seriously” and said this “aggressive response will keep USS Theodore Roosevelt able to respond to any crisis in the region.” On Tuesday, acting Navy Secretary Thomas Modly told CNN that Navy leaders “don’t disagree” with the captain’s assessment and have been working over  “the last several days to move those sailers off the ship,” but said “the problem is that Guam doesn’t have enough beds right now.”

In his letter, Crozier urged the Navy to pursue “the peace time end state” given that “war is not imminent.” Modly’s comments made clear that would not be an option.

“We are not standing down the watch. We still have a responsibility to protect the seas,” Modly said. “We’ll just have to adjust on the fly.”