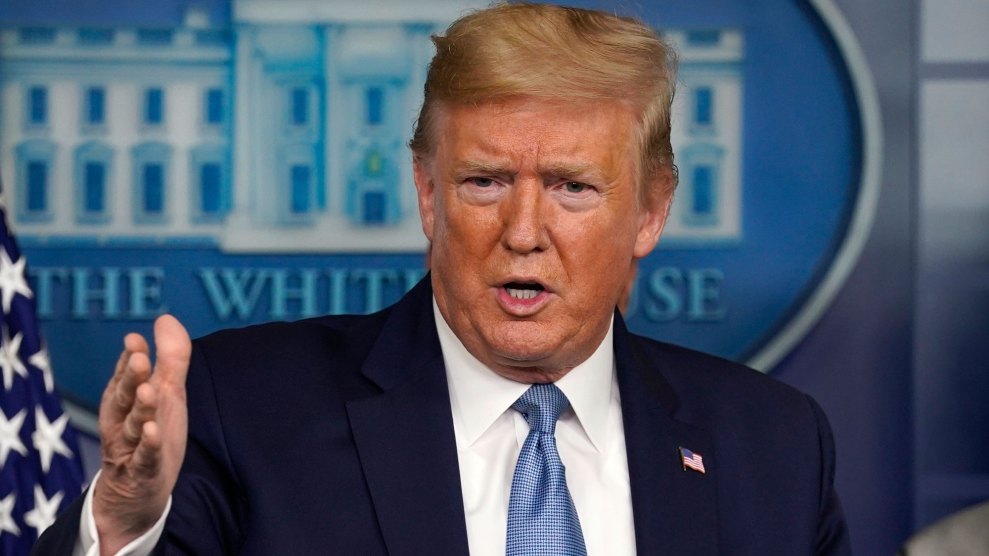 On Sunday, the White House’s National Security Council put to bed a rumor circulating via text message that the president was planning to invoke the Stafford Act to impose a “two-week mandatory quarantine for the nation.”

Text message rumors of a national #quarantine are FAKE. There is no national lockdown. @CDCgov has and will continue to post the latest guidance on #COVID19. #coronavirus

Here’s one version of the hoax text message that has been making the rounds:

I have now received this text message from six friends. One said a military “insider” sent it to them. Y’all gotta cut this out. Stafford Act was declared Friday. It’s a tool to coordinate aid. Does not suspend habeas. Military not dropping in to quarantine you: pic.twitter.com/YcQ1ZwF3ux

On Friday, Trump declared a national emergency over the spread of the coronavirus, allowing the Department of Homeland Security’s Federal Emergency Management Agency to work with state and local governments on relief efforts and unlocking $50 billion in aid. But as the false text message went viral over the weekend, misinformation spread about the scope of the president’s power to authorize a national emergency and what that meant in practice. Elizabeth Goitein, co-director of the Liberty and National Security Program at the Brennan Center for Justice, explained in The Atlantic what exactly Trump’s invocation of the Stafford Act could do.

Under a Stafford Act emergency declaration, the federal government can perform various activities to support state and local emergency assistance. It can coordinate disaster-relief efforts, provide technical and advisory help to state and local governments, provide grants to individuals and households for temporary housing and personal needs, and distribute medicine and food. Under a major-disaster declaration, the federal government can provide additional forms of assistance—most notably, direct relief to victims and communities affected by the disaster in the form of unemployment assistance, food coupons, legal services, grants to assist low-income migrant and seasonal farmworkers, emergency public transportation, and emergency communications.

Even though a pandemic could clearly meet the Stafford Act’s definition of an emergency, using the law for such a purpose is actually quite unusual. Rather, federal responses to such crises generally take place under the auspices of the Department of Health and Human Services, using authorities provided by a different law, the Public Health Services Act (PHSA). In fact, a president has declared a Stafford Act emergency to address an outbreak of disease on only one prior occasion: In 2000, President Bill Clinton issued Stafford Act declarations in response to requests from the governors of New York and New Jersey to address an outbreak of the West Nile virus. No president has ever declared a major disaster in response to a health epidemic.

Wendy Parmet, director of Northeastern University’s Center for Health Policy and Law, told me that the federal government, particularly the Centers for Disease Control and Prevention (CDC), has broad powers to authorize quarantine orders under the Public Health Services Act but not under the Stafford Act, as indicated by the text. “I don’t know what’s in the president’s head but that’s some indication that this is just fake news email, texts, Facebook,” Parmet said.

The act, she added, allows for “the apprehension, detention, or conditional release” of people under quarantine or “to prevent the interstate transmission of a disease if it’s in the country.” A federal quarantine order would have “statutory, regulatory, and constitutional limits” on it and would have to follow existing constitutional safeguards on individual liberties. It’s possible it would run afoul of the Constitution if the order were done in a racially discriminatory way or if it denied people the ability to get basic food. But such a widespread order would be unprecedented, given that the CDC has promulgated isolation orders only twice in the past 50 years. (The CDC’s website notes that the last large-scale isolation or quarantine order came down during the 1918 influenza pandemic.) Far more likely are the sorts of state-mandated business closures and state-level guidance on public gatherings we’re already seeing. “The states are way ahead of where the federal government is,” Parmet said, adding they are acting “far more draconian than the federal government.”

“Wherever [the text message] is going on the Internet, we’re in scary times. There’s been a troubling lack of consistency in messaging and policy from Washington and that helps to sow the seeds of rumors,” Parmet said. “Trust is an absolutely critical ingredient to an effective public health response. If people don’t trust the leadership, that’s a bad situation. Unfortunately, we’re in that bad situation.”