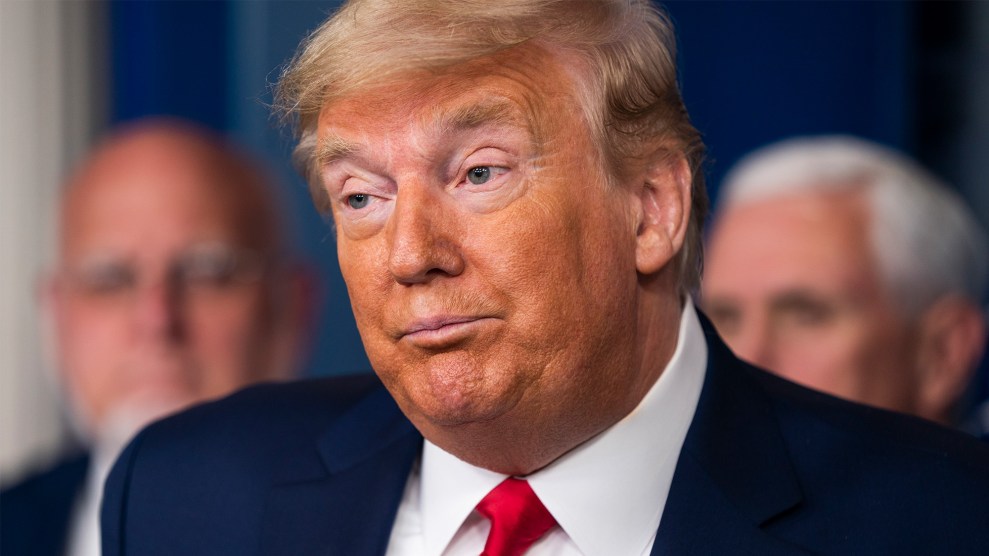 At today’s daily coronavirus task force press conference-slash-MAGA rally, President Trump wouldn’t rule out bailing out his own hotel business with the stimulus funds currently stuck at a Congressional impasse.

“Will you commit publicly that none of that taxpayer money will go toward your own personal properties?” asked a reporter, posing the question on all of our minds, especially as it appears some senators took the opportunity weeks ago of cashing in their knowledge of the outbreak by dumping stock in highly-exposed industries before the crash. The most prominent senator among them, Richard Burr (R–N.C.), says his trades occurred within the context of public news reports, and are now the subject of an ethics probe.

“Everything’s changing, just so you understand. It’s all changing. But I have no idea,” Trump mused. “Let’s just see what happens. Because we have to save some of these great companies.”

To even arrive at that non-response, Trump careened through his typical toxic mix of self-praise and victimhood.

“I committed publicly that I wouldn’t take the $450,000 [presidential] salary. It’s a lot of money,” Trump remarked. “And I did it. Nobody cared—nobody, nobody said, ‘thank you.’”

At this afternoon's task force presser, excuse me, MAGA rally, Trump was asked the obvious question, and gave a self-preening, evasive answer.

Can he guarantee the coronavirus stimulus cash won't be used to bail out his properties? pic.twitter.com/2n0g0UaVu8