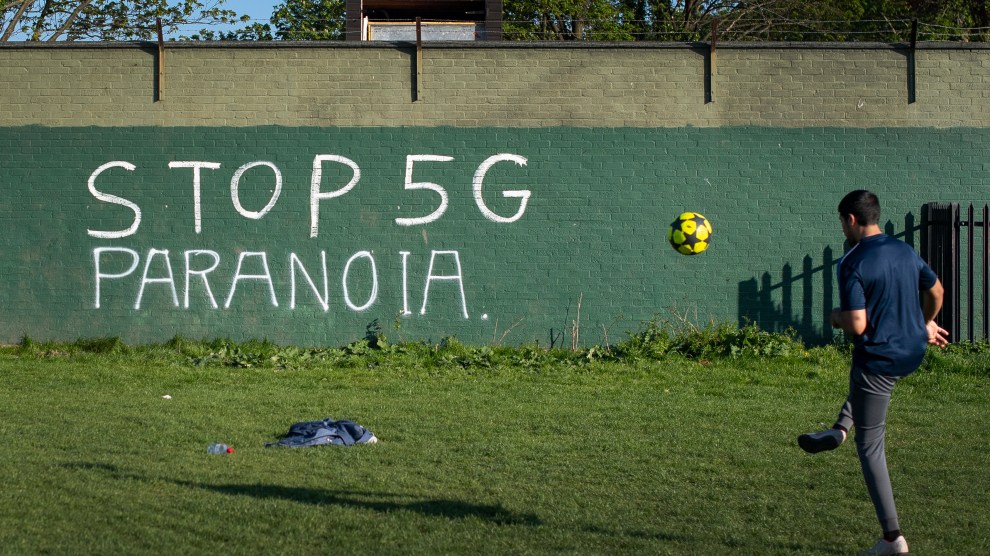 A conspiracy theory suggesting the coronavirus is tied to the spread of 5G cellular communications technology has spread across the internet with the help of social media accounts ranging from small-time wellness influencers all the way to A-list celebrities like Woody Harrelson.

The claim is a remixed version of existing conspiracy theories about 5G that have been spreading in fringe circles, suggesting it causes cancer and other ailments. And, even compared to most conspiracy theories, the notion makes no sense.

Virus conspiracies about 5G don’t add up in the face of simple, widespread, or easily learned knowledge.

Conspiracies often rely on mysterious, but obviously false, premises that are very difficult to fully disprove. QAnon conspiracy theorists, 9/11 truthers, and chemtrail people push hidden government plots that are so classified that normal people wouldn’t be able to verify or disprove them. Anti-vaxxers shroud their theories in convoluted pseudoscience that can be difficult to parse.

Coronavirus conspiracies about 5G, though, don’t even add up in the face of simple, widespread or easily learned knowledge about the virus or the technology.

Normal cell towers that broadcast out previous generations of mobile data, like 4G and 3G, sent their signal for miles in each direction. Frequencies for 5G are disseminated through “small cells,” which are little boxes that can be placed on street lights and other utility polls. The small cells usually spread signals no more than a mile and a half, and often up to a range of just several blocks. Given that 5G has only been rolled out in certain places, if such digital broadband signals were a cause of the coronavirus, there’d be block by block hotspots of outbreaks that left other parts of cities totally unscathed. The majority of the country without any 5G would have no cases at all.

Unsurprisingly, it’s not working out like that. Cities in the U.S. that don’t yet have any 5G have still seen COVID-19 infections. El Paso, Texas doesn’t have 5G yet, but still has 531 recorded cases, according to numbers compiled by the New York Times—that’s over seven times more than nearby Las Cruces, New Mexico, which does have 5G. Maine’s Cumberland County, home to Portland, doesn’t yet have 5G either but has almost 400 recorded cases.

The rollout of and spread of 5G can be so targeted that it’s likely that entire communities, even in cities that already have the technology, may never gain access. Cellular industry analysts predict that telecom providers will not end up deploying the protocols in poor communities with lower broadband demand, similar to how the companies have already digitally redlined poor communities, even in dense urban areas, with poor broadband infrastructure.

So if 5G were causing coronavirus, it would be sparing the most vulnerable, who are concentrated in places where 5G coverage is more limited or still nonexistent. But it’s not: the virus has hit poor communities of color harder than other groups in the U.S.

Doug Brake, the director of broadband and spectrum policy at the Information Technology and Innovation Foundation, a Washington think tank explained that if there was any link between the two, maps of coronavirus outbreaks would correspond tightly with maps of 5G coverage. They don’t, and where there is overlap, it’s simply because dense, highly populated cities are both the kind of places where the virus spreads easily and where 5G has first been adopted.

When you look internationally, the theory gets even more harebrained. “It’s a global pandemic. It’s in all sorts of countries where 5G hasn’t been rolled out. It’s a tenuous claim in the first place,” Brake says.

Regardless of all this easily accessible information, which isn’t shrouded in secrecy or difficult to understand science, conspiracies about mobile broadband frequency continue to spread—with no clear end in sight.