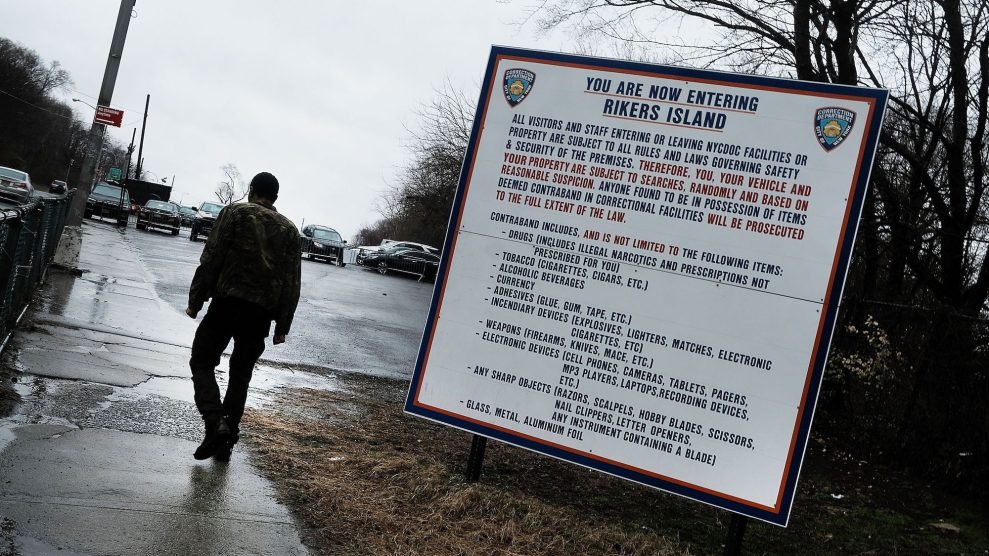 A man enters the road to Rikers Island.Spencer Platt/Getty

New York City is the epicenter of the country’s COVID-19 outbreak—and perhaps nowhere is that outbreak more dangerous than in the city’s most notorious jail complex: Rikers Island.

As of Tuesday morning, across the city 287 inmates (most of them at Rikers) and 406 corrections department staff members had already tested positive for COVID-19. On Sunday, the New York Times reported the first coronavirus death of a Rikers Island inmate. Recent news reports have indicated that inmates at Rikers lack even the luxury of basic precautions such as hand-washing (due to reported shortages of soap) and social distancing, which advocates and former inmates say is impossible to practice in the cramped facility.

Rikers Island, built on a landfill and surrounded by polluting infrastructure, has long suffered hazardous environmental conditions like extreme summer heat, flooding, and noxious pollution. These hazards exemplify the facility’s unpreparedness for a public health crisis like the novel coronavirus—and may have primed its inmates and staff to be especially vulnerable to the most severe effects of COVID-19.

Vidal Guzman remembers these hazards well. He was arrested twice as a teenager and spent a combined three years incarcerated on Rikers Island, awaiting trial.

“Living in Rikers means understanding not to drink the water, understanding how to be careful when rats and rodents are running around,” Guzman told Grist. “Having a rule to stay six feet away from each other for protection against the coronavirus—that is impossible in Rikers.”

Guzman, now 28, ultimately served five years in a state prison before going on to become the outreach and engagement organizer for Just Leadership USA, an organization that advocates for criminal justice reform. He recalls the “crazy rotten egg smell” that lingered at Rikers. The foul odor came from the landfill buried underneath the facility, which releases methane as the garbage decomposes over time and degrades the island’s air quality. The Poletti power plant, which was known as the biggest polluter in the Empire State before it closed in 2010, sat within a mile of Rikers when Guzman arrived there.

“There were individuals on Rikers who were saying things like, ‘I got asthma, I can’t breathe.’ And the elders are saying, ‘Well, you can’t breathe because the ground we’re standing on is built on landfill.'”

“Being around people who were young and with asthma—I saw them having problems with their breathing,” Guzman said. “There were individuals on Rikers who were saying things like, ‘I got asthma, I can’t breathe.’ And the elders are saying, ‘Well, you can’t breathe because the ground we’re standing on is built on landfill.'”

“That’s when I started to put things together,” Guzman remembered.

More than 10,000 people are normally incarcerated on the island at any given time. Roughly 90 percent of them are people of color, and 67 percent have not been convicted of a crime and are simply awaiting trial. Though the inmate population is currently around 5,000, the crowded shared spaces present unique challenges for social distancing. Guzman described beds that are only two to three feet apart in the dormitory housing units, an arrangement that appears to persist even as the facility faces down a pandemic. According to the New York City Department of Correction website, officials are attempting to ensure there is an empty bed in betweeninmates “where possible.”

“We are following the Department of Health and Mental Hygiene guidance to identify any individuals with whom patients had close contact,” the department told Grist in an email. “The health and well-being of our personnel and people in custody is our top priority.”

Public defenders and criminal justice reform advocates have been demanding the release of all inmates with preexisting medical conditions, anyone jailed for parole violations, and the elderly. The government response has been painstakingly slow, advocates say. Hundreds of inmates are now being held in isolation or in quarantined groups after being exposed to someone who tested positive. New York City Mayor Bill de Blasio recently boasted that 900 inmates had been released from the city jail system, bringing the inmate population to the lowest it has been since 1949.

Last Tuesday, New York Governor Andrew Cuomo quietly introduced changes to the state budget’s legislative text that would completely overhaul the Empire State’s recent criminal justice reform, which has only been in effect for three months. The new provisions, which the state legislature voted to pass days later, would expand pretrial detention powers. Advocates fear that the new changes could exacerbate the coronavirus outbreak.

“As someone who was incarcerated and had $25,000 bail at 16 years old, I am very disappointed,” Guzman told Grist. “The new reform would undermine the presumption of innocence, dramatically increase jail populations across the state, and exacerbate racial disparities.”

Governor Cuomo’s office did not respond to a request for comment before publication.

After seven years of incarceration, Guzman returned home at 24 and has been working and organizing with a campaign to close the Rikers Island facilities and improve conditions within the New York City jail system. In 2019, the New York City Council approved an ambitious $8 billion plan to shutter the jail complex by 2026. Queens Councilmember Costa Constantinides, who represents Rikers Island and is the chair of the City Council’s Environmental Protection Committee, has long advocated to transform the 413-acre island into a renewable energy hub. To make that vision a reality, he introduced the Renewable Rikers Act alongside other lawmakers last June.

The Renewable Rikers Act would hand over control of the island from the Department of Correction to the Department of Environmental Protection. It would also invest in studies to determine if the island could be home to a wastewater treatment plant and explore the feasibility of building renewable energy sources such as solar panels and battery storage facilities on the island.

For now, however, advocates and medical professionals are focused on getting the city’s thousands of inmates and jail staff through the pandemic alive.

“The most important part, being in a pandemic right now, is staying in touch with our family members, especially the black and brown communities who are feeling the most of this,” Guzman said. “I’m gonna tell you straight up: I’m in fear of what’s next.”