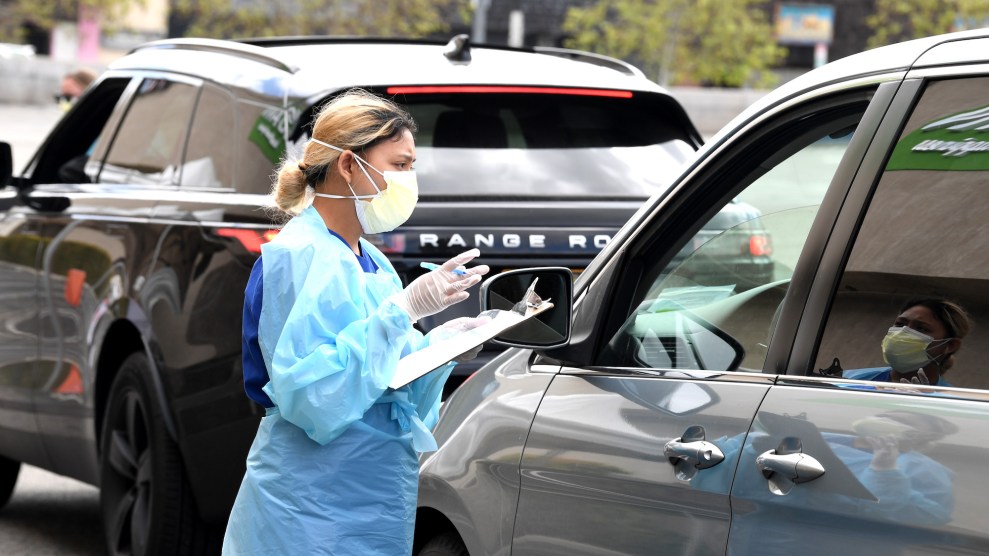 A week and a half ago, public health officials in Los Angeles County reported that 8,430 people in the county had been infected with COVID-19 since the start of the coronavirus pandemic. But according to preliminary results from a new study, the actual number of cases was likely in the hundreds of thousands.

Researchers are now estimating that between 221,000 and 442,000 adults in Los Angeles County had been infected with COVID-19 by early April, officials announced at a press conference today. The study, conducted by researchers at the University of of Southern California and the county public health department, collected blood samples from about 863 adults at drive-through testing sites between April 10 and 14, then looked for COVID-19 antibodies in their blood. They found that between 2.8 to 5.6 percent of those tested had developed antibodies to the virus.

“This gives us a better understanding of how much of our population has, at some point in time, been positive, been infected with the COVID-19 virus, regardless of whether they were ever tested or they even ever had any symptoms,” said Barbara Ferrer, director of the Los Angeles County Department of Public Health. “There are many, many people throughout the county who are positive for COVID-19 who may not be showing any symptoms.”

These findings have good and bad implications, according to Neeraj Sood, the professor at the University of Southern California’s public policy school who co-led the study. The good: COVID-19 is probably less deadly than previously thought, since past mortality rates were based on a much smaller number of confirmed cases. But even though researchers now believe that hundreds of thousands of Los Angeles area residents have been infected, that’s still only about four percent of the county’s population, Sood pointed out. “We are very early in the epidemic,” he said. “Many more people in LA County could potentially be infected. As those number of infections rise, so will the number of deaths, the number of hospitalization, and the number of ICU admissions.”

According to the Los Angeles Times, the findings echo results released last week by Stanford University researchers, who conducted antibody tests in Santa Clara County, one of the earliest and hardest-hit counties in California. Their study found that as many as 81,000 residents had been infected by early April, when the county was reporting about 1,000 confirmed cases. Yet the Santa Clara study has proved controversial among statisticians who argue that the results may not be accurate in part because the test supplier, Premier Biotech, reported to the FDA that that 2 out of every 371 tests were false positives.

Participants in the LA County study, which also used Premier Biotech tests, were chosen randomly from a database maintained by the LRW Group, a market research firm, with quotas for age, gender, and race, Sood said. The study in Santa Clara County has been criticized for recruiting participants from social media, resulting in a sample that was disproportionately white and female and needed to be adjusted, according to the Mercury News.

While the results from Los Angeles are still preliminary, the discrepancy between the county’s official case count earlier this month and the estimated number of actual infections is yet another sign that widespread testing shortages and delays have contributed to our incomplete picture of the coronavirus’ reach.