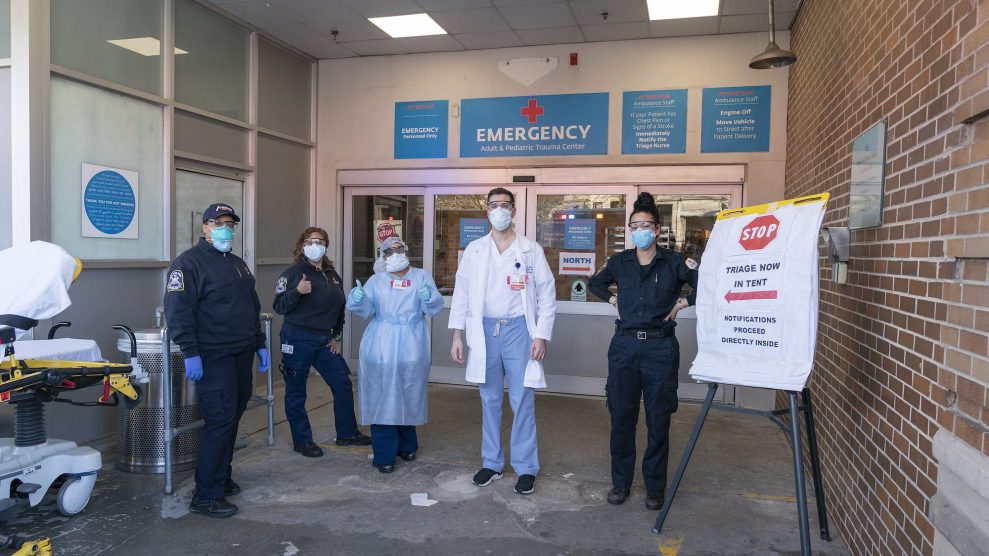 As rates of infection from the novel coronavirus continue to spike, so too do concerns over medical resources. The US now has nearly 20,000 deaths and 500,000 cases, with a disproportionate number of them in New York, California, and Louisiana. Officials there are warning that hospitals are dangerously low on material supplies, like ventilators and masks, but also there’s a shortage of healthcare workers to attend to the sick.

On March 30, New York governor Andrew Cuomo called on the nation’s health care workers to “help New York,” and from all over the country doctors, nurses, and others responded. But hospital workers are also falling ill. At Ochsner Medical Center in New Orleans, which is also experiencing a severe outbreak, 60 employees have tested positive for COVID-19, the disease caused by the new coronavirus, and another 300 workers are in quarantine. To meet the demand nationally, medical workers from parts of the country that have not yet experienced an outbreak are going to work in hospitals where the epidemic has become severe.

But a vast patchwork of state healthcare regulations has made moving some of these workers across state lines complicated—especially for highly trained nurse practitioners. With few national licensing standards in place, healthcare workers who may want to lend a hand in other states, often find their efforts stymied by regulatory road blocks. “Any time you have multiple states creating laws, rules, and regulations through legislative process it’s going to look different [by state],” says Melody Wilkinson, a family nurse practitioner and program director for Georgetown’s School of Nursing & Health Studies. “That creates challenges and barriers.”

“There are these ridiculous state restrictions that are not enhancing patient safety in any way shape or form.”

Leslie Sharpe, a practitioner who teaches at University of North Carolina School of Nursing put it another way: “There are these ridiculous state restrictions that are not enhancing patient safety in any way shape or form.”

That’s not true for all medical specialties. Thanks to a compact among 30 states, licenses for registered nurses are recognized by most jurisdictions, which means that most of the 3.8 million RNs in the US can travel from state to state and immediately join frontline efforts—and many have.

On the other hand, nurse practitioners—who are certified to offer a wider breadth of services than registered nurses—are another story. To become a nurse practitioner, one must earn a master’s or doctoral-level degree. It’s not uncommon for NP’s to offer similar services as physicians: providing physical examinations, offering diagnoses, interpreting test results, even prescribing medications. But for the nearly 300,000 nurse practitioners, their “scope of practice…is determined by the state, rather than by the education and training,” says Wilkinson, which explains why this group of health care practitioners now find themselves mired in restrictions should they want to serve outside their local communities during a global pandemic.

Two major barriers stand between nurse practitioners and intra-state practice. First, states  have no uniform standard for license recognition, like the compact for RNs. The result is that nurse practitioners are only permitted to work in their home states. Also, in 28 states, in order to provide services at all, NPs are required to maintain an administrative relationship with a physician. Depending on how restrictive state laws are, everything from prescriptions to basic care require a doctor’s supervision. That makes emergency mobilization nearly impossible.

Even if all states dropped the licensure restrictions, many states require practitioners to strike up collaborative practice agreements—which is different from the administrative relationship—with in-state physicians, another requirement that becomes particularly difficult during an emergency. “This is creating a challenge for nurse practitioners to respond at the top of their ability to deal with the COVID-19 crisis,” Tay Kopanos, vice president of government affairs at the American Association of Nurse Practitioners, says.

Even for practitioners moving to hotspots within their own state, collaborative practice agreements create a challenge. In North Carolina, for example, which has more than 4,000 official cases of COVID-19 and almost 90 deaths from the virus, NPs must get permission from their physician to practice in a new location. Assisting at a different facility essentially requires finding an entirely new sponsoring physician. “They’re left trying to find someone they don’t know on the other side of the state,” says Leslie Sharpe, a practitioner who teaches at University of North Carolina School of Nursing. “If I wanted to work in a mobile van during a hurricane to provide basic primary care—not trying to do surgery—I couldn’t do it unless I could find a supervising physician,” she says.

On March 26, secretary of Health and Human Services Alex Azar recommended that  states relax those rules and allow nurse practitioners to cross state lines and skip the process of tracking down a sponsoring physician. Governors in 45 states—including New York and California—have ordered their healthcare systems to recognize out-of-state licenses. Meanwhile, 18 states—North Carolina is not among them—have relaxed their practice agreements. A number of other states are also accepting the licenses of retired and inactive nurse practitioners.

While nurse practitioners say that will bring relief to strained healthcare systems, some are wondering why it took so long? “I think this is somewhat long overdue,” says Wilkinson, “If it’s safe for us to practice during a state of crisis, it’s safe all of the time.”

On Tuesday, March 31, Louisiana officially relaxed regulations in order to bring out of state practitioners who can get to work without a supervising physician. According to Kathy Baldridge, a nurse practitioner and president of the Louisiana Association of Nurse Practitioners, the change didn’t come a moment too soon. Earlier in the month, an Arkansas nurse practitioner travelled to Ochsner Medical Center in New Orleans, one of the worst-hit hospitals in the country. Baldridge notes that at that point, it was still necessary to have a collaborative physician’s agreement, a difficult relationship to strike up in the midst of the crisis. As a result, the colleague had to operate as a registered nurse, restricted from providing care at the level of an NP, despite having the qualification. With an executive order, state governor John Bel Edwards lifted those restraints, allowing Baldridge’s colleague to offer the same care she was providing over the state line in Arkansas.

The days between January 19 when COVID-19 first appeared in Washington state and the when executive orders for practitioners were instituted could have been spent organizing much-needed care. “If those laws were already taken care of,” Baldridge says, “then you could have worried about the emergency at hand and not the executive order. So the medical staff who are out there can function to the top of their license and education.”