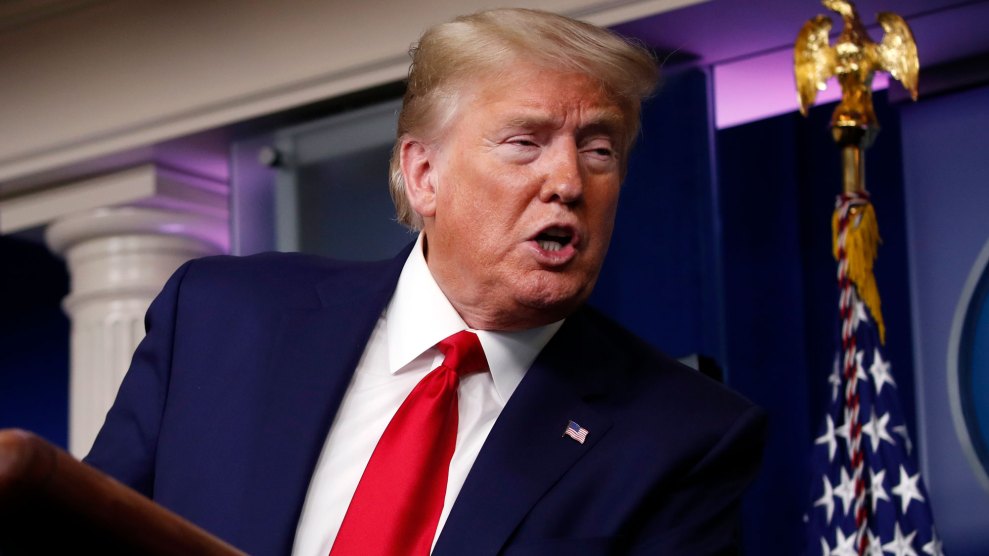 On Monday, President Donald Trump again lauded the nation’s capacity for coronavirus testing and said states simply needed to take advantage of that capacity. In doing so, he took a swipe at the governors of Maryland and Illinois, who have been critical of the federal government’s approach to testing. Just hours before the president’s press conference, the Associated Press reported that Maryland Gov. Larry Hogan had purchased 500,000 tests from South Korea to combat shortages in the state.

“Hundreds and hundreds of labs are ready, willing, and able. Some of the governors, as an example, the governor of Maryland didn’t understand too much about what was going on,” Trump told reporters. “So now he’ll be able to do that. It’s pretty simple. They have tremendous capacity, and we hope to be able to help him out.” Later in the briefing, Trump added: “The governor of Maryland could have called Mike Pence and saved a lot of money. He didn’t need to go to South Korea. I think he needed to get a little bit of knowledge.”

Note: Access to testing has been an issue for months. Governors, business leaders & every day people have been sounding the alarm for months that there are not enough tests.

Trump singles out JB Pritzker, Illinois governor who has been sharply critical of the fed response, and says: “Some states have far more capacity than they actually understand … Some of the governors didn’t understand it.”

Despite praising states’ COVID-19 testing capacity, the fact is that governors have repeatedly said the opposite: Democratic and Republican governors alike have rejected the administration’s optimistic take and have demanded more tests before they decide to re-open their economies. Researchers have argued that the number of tests per day, currently at 150,000, needs to triple before cities could begin easing shelter-in-place policies.

On Sunday, after Pence said on NBC’s Meet the Press that “there is a sufficient capacity of testing across the country today for any state in America” to begin lifting social distancing restrictions, Hogan, who serves as chairman of the National Governors Association, pushed back on the administration’s criticism that governors hadn’t taken advantage of testing. Hogan told CNN’s State of the Union: “To try to push this off, to say that the governors have plenty of testing and they should just get to work on testing—somehow we aren’t doing our job—is just absolutely false.” Hogan went on:

The administration, I think, is trying to ramp up testing, and trying — they are doing some things with respect to private labs.

But to try to push this off to say that the governors have plenty of testing, and they should just get to work on testing, somehow we aren’t doing our job, is just absolutely false. Every governor in America has been pushing and fighting and clawing to get more tests, not only from the federal government, but from every private lab in America and from all across the world. And we continue to do so.

Look, we have increased our testing in Maryland by 5,000 percent over the past month, but it’s nowhere near where it needs to be. And, as Governor Northam said a moment ago, there are things like shortages on swabs that we don’t have anywhere in America that you can’t do the test without, on reagents, which is a part of the test.

So, look, I think they have made some strides at the federal level. I think states are all working hard on their own to find their own testing. Lab capacity has been increasing.

But it’s not accurate to say there’s plenty of testing out there, and the governors should just get it done. That’s just not being straightforward.

"It's not accurate to say there's plenty of testing out there and the governors should just get it done. That's just not being straightforward." Via CNN pic.twitter.com/0Z37AHBuii