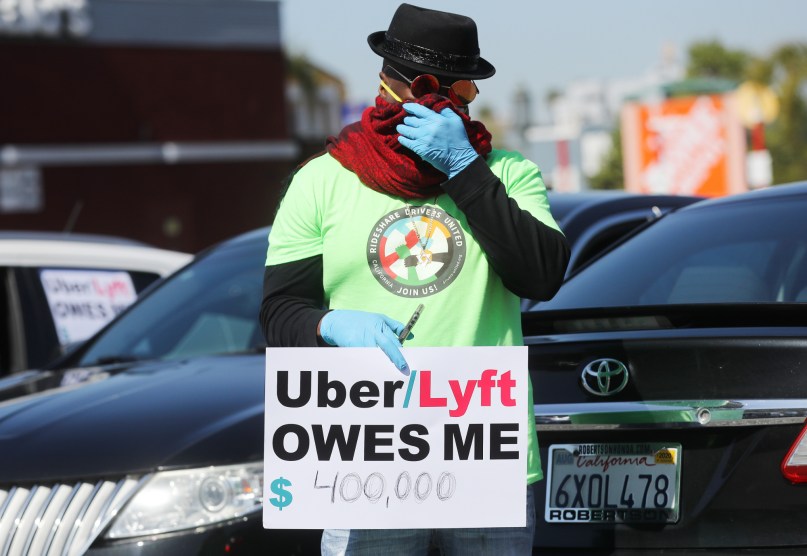 Drivers for Lyft and Uber in both San Francisco and Sacramento protested from their cars Wednesday morning, circling government buildings to demand the state award them expedited unemployment insurance and back wages amid the coronavirus pandemic.

But the point is broader: Gig workers are agitating the state to recognize them as employees.

On January 1, Assembly Bill 5, a law that was supposed to make it harder for gig companies to classify workers as independent contractors, went into effect. But tech companies haven’t complied and the state of California hasn’t done much to enforce it. Major delivery companies have poured $110 million into a ballot measure to overturn the law come November. And they’re still moving forward with the initiative—even as the coronavirus has exacerbated concerns of precarious safety and pay from workers.

“I’m doing everything I can do to enforce AB 5,” said Michael Frazier, a driver in Los Angeles who called into a Zoom press conference from his car after the protest, a white mask hanging over his chin.

Drivers say they are owed back pay for lower than minimum wage payment, expenses, and overtime. Over 2,500 drivers have already submitted claims totaling more than $630 million in back wages, according to Rideshare Drivers United (RDU), who organized the protest this morning. And RDU is helping drivers submit their unemployment assistance with the state—a benefit only employees had until the recent federal pandemic unemployment assistance—hoping that will force California to recognize drivers are not independent contractors.

But Uber and Lyft have refused to report driver’s income to the state, blocking unemployment claims. And drivers say that when they’ve filed as employees with the California Employment Development Department, the state told them they qualified for $0 in assistance.

“It’s time that Uber and Lyft start sharing our data,” said San Francisco driver Erica Mighetto. “So we can survive. This has really become a situation of survival—eating!”

If California drivers need money now, they could apply for unemployment as contractors and get it from the Coronavirus Aid, Relief and Economic Security (CARES) Act. But, in applying for that aid, they’d have to confirm their misclassification as contractors. And drivers want Uber and Lyft to pay them—not taxpayers.

Mighetto said she may have to file for the newly passed federal pandemic unemployment insurance as an independent contractor, even if she believes that’s not her employment status, because she needs the money.

But drivers worry that would set the wrong precedent. To avoid it, driver Tammie Jean Lane said she spent “hours” putting together a spreadsheet to prove her income, even though the companies could’ve shared it easily. “It shouldn’t be on us drivers when it’s something they should be doing,” she said.

As she tracked her wages, she did notice something though. She wasn’t crazy to think the mysterious algorithimic pay model didn’t always benefit her: She found a ride that cost the rider $138; she got about $60 of it.

“They call us independent contractors, they know that’s a lie,” said Frazier.

He said the coronavirus has exposed how the companies and its users treat drivers inhumanely.

Frazier remembered when he wanted to stop driving. A passenger—coughing and sneezing—from the Los Angeles airport got into his vehicle and said he “snuck in from Italy.” It was before the virus was widespread. But Frazier had a medical mask from the California fires he quickly put on.

“Me and the guy almost got into it,” Frazier remembers. “He said, ‘If you didn’t want to put your life on the line why would you even be doing a job like this?'”