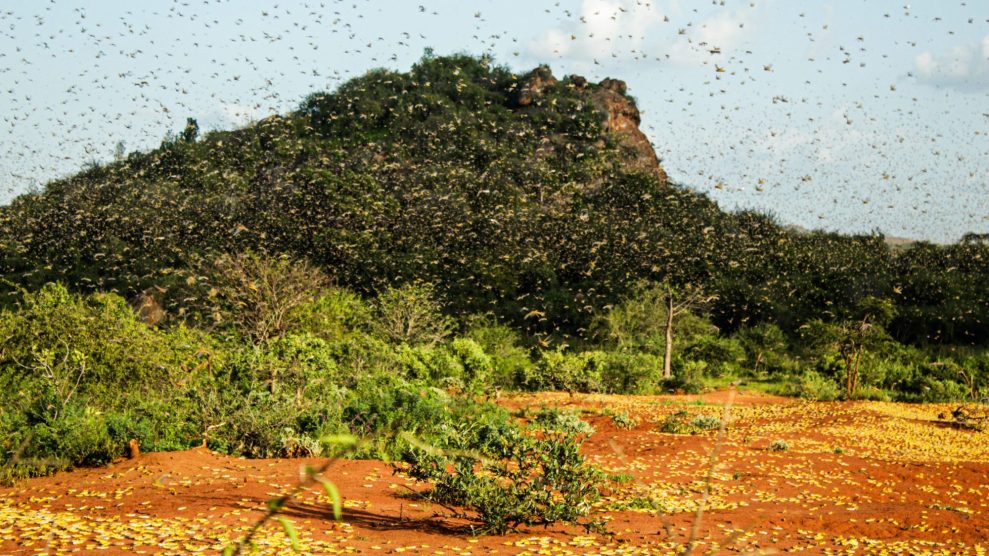 A cloud of locusts flying in Mwingi North, Kenya.Fred Mutune/Zuma

As the coronavirus pandemic exploded across the world earlier this year, another even more conspicuous plague was tearing through East Africa: locusts. The voracious little beasts are particularly fond of carbohydrates like grains, a staple of subsistence farmers across the continent. Back in January, the UN Food and Agriculture Organization (FAO) predicted the worst was still to come, and that by June, the size of the swarms could grow by a factor of 500.

And now, at the worst time, a second wave of locusts 20 times bigger than the first has descended on the region, thanks to heavy rains late last month, according to the FAO. The swarms have infiltrated Yemen and firmly established themselves across the Persian Gulf, having laid eggs along 560 miles of Iran’s coastline. New swarms are particularly severe in Kenya, Ethiopia, and Somalia.

“The timing is really horrendous, because the farmers are just planting, and the seedlings are just coming up now.”

“The timing is really horrendous, because the farmers are just planting, and the seedlings are just coming up now since it’s the beginning of the rainy season,” says Keith Cressman, senior locust forecasting officer with the FAO. “And it’s right at the same time when you have an increasing number of swarms in Kenya and in Ethiopia. There’s already pictures and reports of the seedlings getting hammered by the swarms. So basically that’s it for the farmers’ crops.”

“This represents an unprecedented threat to food security and livelihoods,” FAO officials wrote in a brief last week. All this is happening while the region locks down to stave off the coronavirus pandemic, and as travel restrictions mean experts can’t get to countries to train people. It’d be hard to imagine a more brutal confluence of factors. “The problem is that most of the countries were not ready, and are now invaded with swarms,” says ecologist Cyril Piou, of the French Agricultural Research Center for International Development, which helps economically developing countries with agricultural issues. “The solution is to try to control as much as you can.”

It would also be hard to imagine a more perfect enemy than the locust: in this case, the desert locust, one of the 20 species of normally solitary grasshopper that go “gregarious,” forming into swarms that can travel 90 miles in a day. Their transformation and swarming is triggered by rain; desert locusts can only lay their eggs in moist sand, since dry sand would cook them. After a storm, the locusts breed like crazy, packing a single square meter of sand with perhaps 1,000 eggs.

When those eggs hatch, the baby locusts find themselves in a newly lush environment loaded with food. They’ll strip it clean and take off in swarms in search of ever more vegetation to obliterate. Their bodies actually transform to prepare them for the journey; their muscles grow bulkier, and their color changes from a drab brownish green into an electric yellow and black. This color shift probably has to do with the gregarious locusts now eating the toxic plants they had previously avoided as solitary insects: That bright coloration warns predators that they’re toxic as a result of their diet. If they were this color when they’re solitary, they’d stick out to predators, but as they gather in their billions, it’s not like they need to be inconspicuous anymore. There’s safety in extreme numbers.

This particular outbreak began with heavy rains from two cyclones in May and October of 2018 that hit the southern Arabian Peninsula. This allowed two generations of desert locusts to form into swarms. Each generation can be 20 times bigger than the previous one. “The main problem is that these exceptional rains occurred in an area where there’s a lot of insecurity, wars, and so on, so the initial stages of the upsurge of the outbreaks were not detected in time,” says entomologist Michel Lecoq, former director of the French Agricultural Research Center for International Development.

This lapse in detection unfolded despite the best efforts of the FAO, which coordinates a complex network of data collectors to detect the locusts early, before they have time to go gregarious and swarm. They work with two dozen frontline countries between East Africa and India, with people patrolling in trucks, looking for the pests. They marry this on-the-ground information with satellite data that shows vegetation forming—an indication that hungry locusts could well follow.

Unfortunately, though, the locust boom in 2018 unfolded in Oman’s remote deserts, so there was no one around to raise the alarm. “We can help in creating better models, better forecasts,” says Piou. “But if there’s nobody on the ground, there’s no humans, then it’s not enough. We cannot replace humans on the ground with satellites.”

The terrifying reality is that if you don’t stop a locust swarm early, there’s very little you can do to stop its spread. These insects do not respect borders, and they do not respect crops. Once the swarm arrives, the best officials can do is deploy pesticides to attenuate the crop destruction. But that, too, requires humans, and specially trained crews at that—you can’t just hand a farmer a barrel of pesticide and hope no one gets sick.

Luckily, countries currently invaded by locusts, like Kenya and Ethiopia, already have plenty of experts who know how to run a spraying operation. The concern is for what will happen if the swarms spread into countries like South Sudan and Uganda, which haven’t seen major outbreaks for decades. “They don’t have any national locust program in their country within the ministry of agriculture,” says Cressman, of the FAO. “They have no physical setup, but they also have no expertise, no trained staff in the various aspects of controlling locust.” With travel restrictions in place, experts can’t get there to train people up. And even if they could get there, social distancing means you can’t fill up rooms for lessons on locust control.

The good news in all this is that while shipments of pesticides and spraying equipment to Africa may have slowed as supply chains slow in general, this particular supply chain is distributed across the globe. “It’s coming from the four corners of the planet,” says Cressman. “So we’re not just relying on one region to supply us, which could be a bit risky, because if that region really shuts down, you wouldn’t be able to sustain the supply.”

Still, the timing of it all is catastrophic: locusts in the age of the coronavirus, with the start of the harvest season coming in late June and early July. “And unfortunately that’s exactly the same time when the next generation of swarms will be forming,” says Cressman.

With nations elsewhere wrapped up in fighting the coronavirus pandemic, the growing locust threat may not get the attention, and humanitarian aid, it needs. A locust outbreak, Cressman says, is a lot like a wildfire: Put it out early, and you’re good. Delay, and the swarm will spread and spread until it runs out of fuel—the food that subsistence farmers across Africa rely on to survive.

The good news is that the swarms haven’t yet spread through North and West Africa. The bad news is that the magnitude of this outbreak rivals that of the devastating swarms that hit the continent 75 years ago. Beginning in 1948, locusts multiplied out of control in Africa, and didn’t stop until 1963. “So if we don’t stop it now,” Piou says, “we are going to have swarms rolling from country to country.”

To keep that from happening, Piou is working with countries in the region to predict where the locusts might land next. “What we are trying to do with them is to be ready as soon as the swarms arrive,” he says, “to have a quick answer and not let them reproduce again and exponentially grow again.”