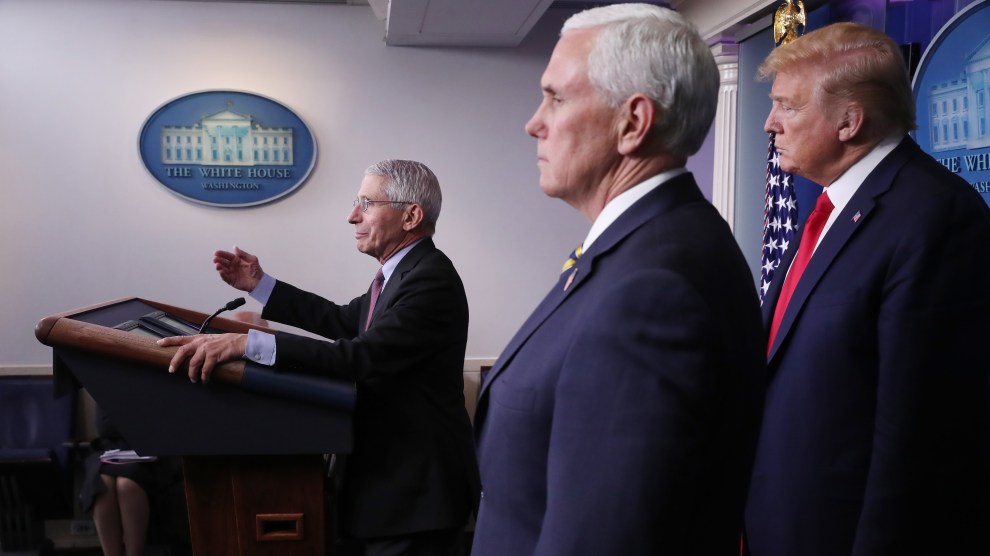 The New York Times reported Tuesday that the Trump administration was considering winding down its coronavirus task force, according to Olivia Troye, an adviser to Vice President Mike Pence. In a flurry of confusion that underscores the approach to messaging that has defined the Trump administration’s response to the pandemic, Pence confirmed the reports, but Dr. Anthony Fauci, head of the National Institute of Allergy and Infectious Diseases and the administration’s most trusted voice on the coronavirus pandemic, denied them.

The coronavirus task force often has been the key vehicle for the nation’s top infectious disease experts, including Drs. Fauci and Deborah Birx, who is the White House coronavirus response coordinator, to inform both the Trump administration and the general public on the science behind the novel coronavirus spread, containment, and prevention. The clarity and success of their efforts have been stymied by internal divisions.

In February, Health and Human Services secretary Alex Azar was ousted as the group’s leader and replaced by Pence. In March, the doctors on the task force reportedly began meeting privately almost every day because they were so concerned about the “voodoo” espoused by other task force members, according to the Washington Post. Meanwhile, Fauci, whom President Trump has retweeted posts about wanting to fire, has expressed cautious dismay at Trump’s habit of commandeering task force press briefings to ramble for hours about his own accomplishments and traffic in misinformation about treatments and cures.

The turmoil in the task force comes as coronavirus case counts in the United States rise precipitously and two days after Trump said he expected the total death toll in the United States to reach 100,000. Nonetheless, several states are reopening their economies with vocal support from President Trump despite public health officials cautioning that doing so too soon could spark a resurgence in cases and deaths.

Amid an era-defining pandemic, the coronavirus task force—especially the calm authority of Dr. Fauci—has been the closest thing many Americans have had to a clear, reliable source of information and direction from the federal government. The Centers for Disease Control and Prevention, which normally leads public health messaging during disease outbreaks, has largely stayed quiet in the past few months. And, absent any visible public health leadership, the “shadow task force” operated by Trump’s son-in-law, Jared Kushner, could gain still more power. What could go wrong?