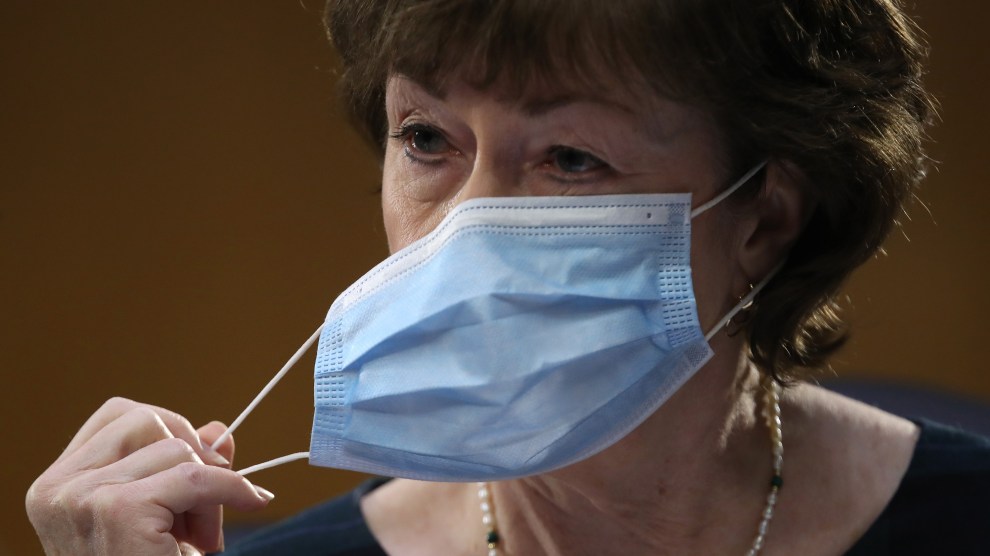 Today, like any good politics blogger, I tuned in to watch the first major hearing by the Senate on the government response to the coronavirus pandemic. And, like any good politics blogger, I had Twitter open in a separate tab. Much to my surprise, instead of Dr. Anthony Fauci—the director of the National Institute of Allergy and Infectious Diseases—or Centers for Disease Control head Dr. Robert Redfield, who was trending but Sen. Susan Collins (R-Maine). I clicked on her name. Surely, I thought, her absurd defense of the dental lobby was going viral.

Sen. Susan Collins: “Dentists tell me that teeth with cavities that could’ve been filled are now going to need root canals.” pic.twitter.com/vdnD0BqtNu

For all the reasons to criticize Collins—her decisive vote to confirm Brett Kavanaugh’s appointment to the Supreme Court, for example, or her reluctance to convict President Donald Trump in his Senate impeachment trial—this one actually seems to be unfair. Here’s why.

At the beginning of the hearing, the chair of the Senate Committee on Health, Education, Labor and Pensions, Sen. Lamar Alexander (R-Tenn.), announced that senators were allowed to remove their masks when speaking because they were all six feet apart. From the footage I have been poring over to get to the bottom of this pressing issue, I can see that Senator Collins, also known as the villain, entered the hearing room wearing a mask. She said hello to Sens. Tim Kaine (D-Va.) and Richard Burr (R-N.C.), sat down at her isolated seat, and, after a few minutes, slipped off her mask. During that time, the Twitter outrage began.

Dr. Anthony Fauci is about to testify before the Senate. Everyone in this camera shot is wearing a mask, except for Susan Collins.

Because wearing a mask to protect yourself and others from a deadly virus is now deemed partisan and anti-Trump. pic.twitter.com/t4K7cMl4YC

Later in the hearing, her mask was back on, where it remained for the rest of the hearing, except when she was speaking.

The Centers for Disease Control and Prevention recommends wearing masks “in public settings where other social distancing measures are difficult to maintain”—not in Senate hearings where all who are attending are amply spread apart. There isn’t even a scientific consensus on how effective face coverings are in preventing the spread of the coronavirus, but we don’t need to get into that here. (President Trump, it turns out, wouldn’t be caught dead in a mask.) So, please, can we stop with the mask shaming and figure out why Collins wants to risk lives to appease Maine’s dentists?