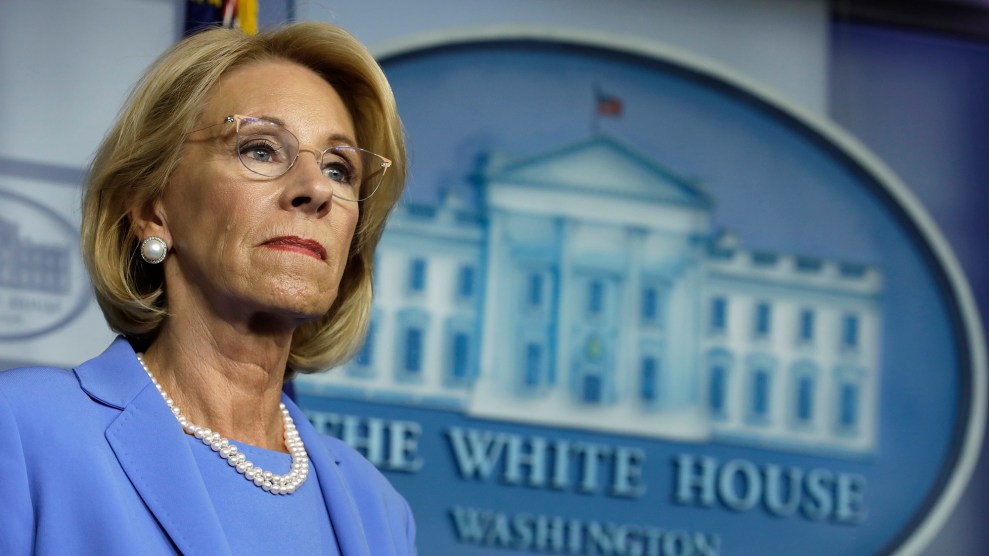 President Donald Trump spent a lot of the last week talking about re-opening public schools in the fall. As the Daily Beast reported, his campaign has done polling on the issue and found that it could be a winning electoral issue for him. The catch is that it’s only a winning electoral issue if people actually trust that you will be able to responsibly reopen schools. For that reason, Trump’s PR push is sort of self-defeating—if you were actually the person who was going to responsibly open public schools, you wouldn’t have just started thinking about it in July.

And, perhaps, you wouldn’t make the point person for all of this Education Secretary Betsy DeVos. On CNN’s State of the Union on Sunday, DeVos was asked by host Dana Bash to clarify what public-health experts were telling her about “the appropriate level of transmission for a school before it has to shut down.” It’s gets at the big question at the heart of all of this—what’s the plan? Everyone wants schools to reopen. It comes down to whether the conditions on the ground will allow it. Schools aren’t little epidemiology labs; they need guidance.

DeVos, though, acted as if she’d just strolled into home room and found out there was a test that day:

“Every school should have plans for that situation to be able to pivot and ensure that kids can continue learning, at a distance if they have to for a short period of time,” she said. What’s the plan? The plan is to have plans. It’s a plan plan.

Bash followed up: “Why do you not have guidance…just weeks before you want those schools to reopen,” she wondered, “and what happens if there’s an outbreak?”

“You know, there’s really good examples that have been utilized in the private sector and elsewhere, also with front line workers and hospitals, and all of that data and all of those examples can be referenced by school leaders,” DeVos said.

Again, Bash asked if DeVos—the Secretary of Education—for specifics. And Again, DeVos stopped short of offering any: “Schools should do what’s right on the ground at that time for their students and for their situation.”

What should they base those plans off of? Maybe some day we’ll find out.