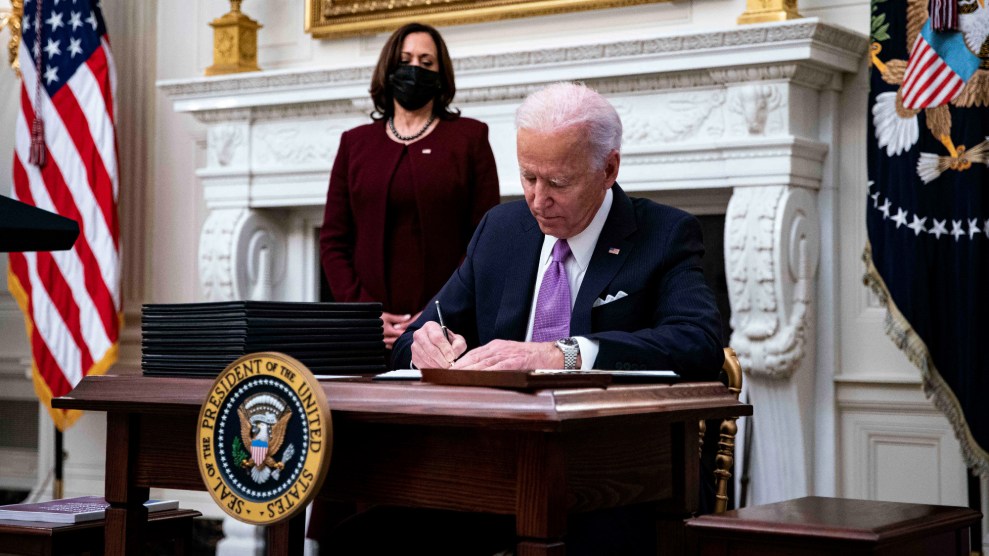 On Biden’s second day in office, he issued a slew of executive actions aimed at curbing the coronavirus pandemic, and they came at a particularly desperate moment. By most counts, more than 400,000 Americans have died of COVID-19. The vaccination rollout program has been plagued by logistical problems and poor messaging. Meanwhile, the country is bracing for the onslaught of more contagious new variants. The new president’s executive actions are wide ranging: Biden called for widespread mask mandates, and he intends to invoke the Defense Production Act to supercharge the manufacturing of lifesaving protective gear. He also aims to streamline vaccine distribution and prioritize those hardest hit by the virus, particularly Black and Latinx communities.

It’s about time. Earlier this week, New York Times columnist Ezra Klein called Biden’s plan “maddeningly obvious.” Indeed, the measures that he suggests reflect the basic tenets of good public health policy. It is tempting to wonder what would have happened if the Trump administration had followed these well established guidelines. How would the last year have been different? Where would we be now? We decided to put the question to a few experts from our Pandemic-Proofing America series. Here are their answers.

Perry Halkitis, epidemiologist and dean of the Rutgers University School of Public Health:  The lack of respect for science and the complete disregard of the mitigation strategies to control COVID resulted in unnecessary deaths. It was estimated that if 95 percent of people consistently wore masks, 130,000 lives could be saved between November 2020 and March 2021. Instead, we will be at 500,000 deaths by March. If we had sound political leadership and truth last year, we could have cut total deaths in half. If the Trump administration had a sound national vaccination program, we would have utilized most, not a third, of our doses. Instead, lack of coordination left the states with the burden that they do not have the resources to implement. We also would have enough uptake [of vaccines] to achieve herd immunity by June.

“President Trump would have had bipartisan support, scientists and public health experts would have been rushing in to help, had he simply done the right thing.”

Gregg Gonsalves, assistant professor at Yale School of Public Health and an associate professor at Yale Law School: President Biden’s executive orders on the federal COVID response are exactly what we should have expected a year ago from President Trump. These initial actions are driven by solid, mainstream public health thinking, which Democratic and Republican Administrations in the past would have enacted if faced with the crisis that befell us in 2020. That is the tragedy of this moment: If President Trump had just followed this path last January we would have had fewer cases, fewer deaths. President Trump would have had bipartisan support, scientists and public health experts would have been rushing in to help, had he simply done the right thing. Instead, he fully, deliberately tossed aside much of this pandemic playbook, for reasons I’ll never quite understand, bringing death and devastation to our country month after month.

Peter Hotez, vaccinologist, pediatrician, and dean of the National School of Tropical Medicine at Baylor College of Medicine: We could have dramatically reduced the loss of life in our nation from COVID-19 if we had brought in the full force of the federal government. Aside from the horrible and deliberate disinformation campaign, there was a refusal to launch a national or federal response, instead leaving this to the states. But the states never had the intellectual horsepower and knowledge to fight COVID. As a result: 1) we missed the virus entry from Southern Europe into NYC in March April last year; 2)  we never entirely fixed diagnostic testing; 3) we never created a system of syndromic surveillance or contact tracing; 4) [there was] no epidemic modelling to have a roadmap; 5) we never scaled virus genome sequencing to anything close to what is needed to detect emerging variants; 6) we failed to halt the surge in the summer or 7) the fall surge, and now 8) our national vaccine plan. Ultimately it was disinformation and this bizarre insistence on having the states in the lead which led to our national failure and 400,000 Americans who lost their lives. The disinformation was straight out of the White House, but the insistence on the states was both White House and likely internal failings within Health and Human Services agencies.