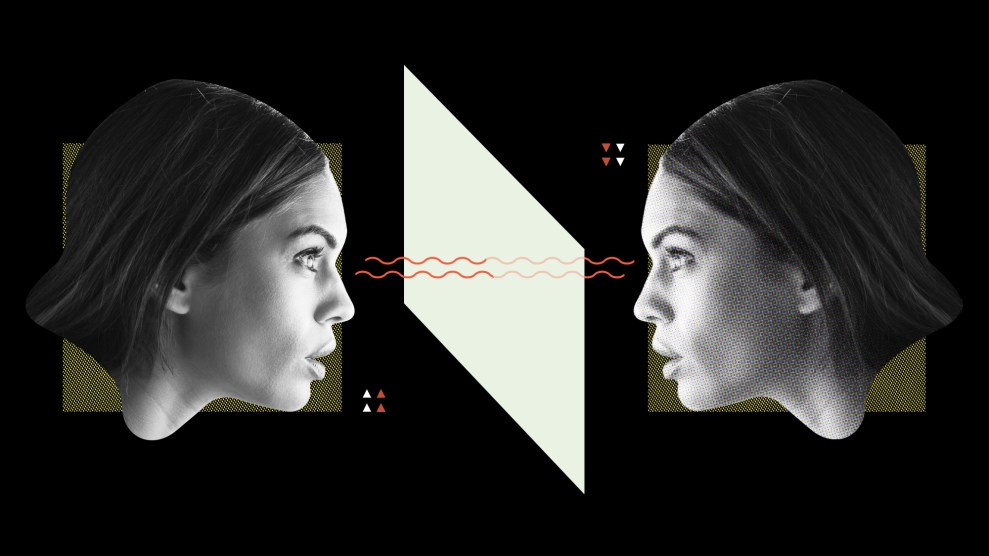 The coronavirus is a rapidly developing news story, so some of the content in this article might be out of date. Check out our most recent coverage of the coronavirus crisis, and subscribe to the Mother Jones Daily newsletter.
Since the arrival of COVID-19, our lives have shifted in ways big and small. Most likely, the pandemic will not end with a bang—we’ll be dealing with some version of it for years to come. As we slowly adapt to our new normal, we’ll embrace some changes and resent others. A few of us at Mother Jones wrote about some of the shifts we’ve noticed in our personal lives and the world around us—from the “love it” to the “leave it” to the we’re-still-figuring-it-out. Read the rest of the essays here.

For the first time in my life, I understand why so many people who make their livings in front of the camera—reality show personalities, news anchors, movie stars—get plastic surgery. I empathize with them. I get it. I, too, have had the experience of spending an inordinate amount of time looking at myself—not with millions of others on Bravo, but with a select group of colleagues on Zoom.

When I first installed Zoom, I didn’t think too much about the personal implications. As with much of the rest of the world, the pandemic forced my work life online, so I got the tool that allowed me to have meetings and see co-workers while we stayed physically apart. But I could never have imagined how hours and hours of looking at myself would affect me psychologically. I’m someone whose makeup routine takes five minutes max, who doesn’t wear high heels as a matter of principle, and who avoids taking selfies or looking at photos of myself. For most of my life, this hasn’t been a problem.

But slowly, during my Zoom-focused, quarantined life I’ve felt my occasionally ambivalent but generally self-confident sense of my appearance erode. Day in and day out I was forced to stare at the puffy bags under my eyes, the unfortunate spattering of adult acne on my chin, the way my face looks when I laugh too hard (which I usually do). It became impossible not to critically dissect my appearance, to silence my hectoring inner Anna Wintour. After one particularly Zoom-heavy day, I googled eye-lift procedures and how much they cost. (Around $3,000 with a recovery time of two weeks.)

After one particularly Zoom-heavy day, I googled eye-lift procedures and how much they cost. (Around $3,000 with a recovery time of two weeks.)

Why not merely select the “hide self” function on Zoom, you might reasonably ask. Because now that I have the option to stare at myself in action, I need to know what everyone else sees my face do. During the pre-pandemic days of uncomplicated indoor dining, when I found myself eating at a restaurant with a mirror on the wall opposite my seat, I couldn’t help checking myself out. It’s too tempting to try to plumb the depths of that impossible question: What do other people see when they see me? And how can I fix it so that what they see looks like I want it to?

Turns out, I’m not alone.

Plastic surgeons are reporting that interest in plastic surgery has markedly increased during the pandemic, especially for the whole menu of facial procedures, from rhinoplasty to face lifts, cheek implants, ear surgery, eye lifts, forehead lifts, neck lifts, botox, and fillers. They’ve even given the phenomenon a name: the “Zoom Boom.”

The market research firm Equation Research surveyed more than 1,000 women across the United States and found that interest in plastic surgery has gone up by 11 percent among women over the last year, though we don’t know the age breakdown. (The absence of men in the survey is glaring—certainly they’re not exempt.) Although almost all cosmetic procedures decreased overall during the pandemic due to office closures, facial procedures decreased by the smallest percentage.

A survey conducted by the American Society of Plastic Surgeons (ASPS) of their nearly 8,000 members revealed that nose reshaping (352,555 procedures), eyelid surgery (352,112 procedures), and face lifts (234,374 procedures) were the top three cosmetic surgical procedures in 2020. When accounting for the fact that most plastic surgeon were closed for an average of eight weeks in the year, the demand for each of these procedures actually rose by 12 percent, 7 percent, and 4 percent respectively. Demand for the most popular body-focused procedures, by contrast, dropped. Breast augmentation surgeries were down by 18 percent, liposuction was down by 5 percent, tummy tucks were down by 2 percent, and breast lifts were down by 6 percent. During these days spent sitting and staring at the screen, why bother fixing anything from the neck down? (Though demand for butt implants has notably soared!)

I decided to talk to some experts about this—just as a reporter of course. So I tracked down Dr. Lynn Jeffers, a plastic surgeon and chief medical officer at the St. John’s Pleasant Valley Hospital in Camarillo, California, to ask what this Zoom Boom is all about. (Jeffers has also been working overtime running the vaccine rollout at her hospital.) She thinks there are three main factors. People had more disposable income during the pandemic because they were saving money on things like travel and dining out. Also, working from home made recovering from surgery easier and more discreet. And the only factor I could personally relate to: “We were suddenly all on Zoom, and our faces were so big in front of us, and most of us didn’t have great lighting or great webcams and so forth,” says Jeffers. “A number of people attributed the increased interest in facial procedures, as well as Botox and fillers, because that’s what everybody was seeing.”

“We were suddenly all on Zoom, and our faces were so big in front of us, and most of us didn’t have great lighting or great webcams.”

While Zoom fatigue has been a struggle for many of us, the effects have been especially distressing for the roughly 2 to 3 percent of Americans who struggle with body dysmorphic disorder (BDD). “Skin, nose, lots of different facial features tend to be the focus of concern in BDD,” says Dr. Hilary Weingarden, a practicing psychologist and clinical researcher at Massachusetts General Hospital who specializes in OCD and related disorders, such as BDD. She explained to me that any concerns I might have about my facial appearance can take on a heightened, or even distorted, presence in my self-perception when I see myself on Zoom for long periods of time.

“When you sit on Zoom, you’re staring at them all day long, and so we can tend to over-focus on that body part of concern,” she says. “When we look at ourselves in that way, we can start to actually distort our perception. And it starts to look more blown out of proportion.”

Weingarden points out that when people focus on small flaws about themselves, they are seeing a very different picture from what other people see, which is more holistic. Also, Zoom is a particularly strange and unforgiving vehicle in that it literally lines our faces up next to other faces, which creates a situation that’s ripe for unflattering comparisons—a dangerous rabbit hole, as anyone with a propensity for late-night Instagram scrolling will tell you.

Of course, there are lots of reasons to want to tweak or alter appearance, but my own obsessive dissection of my face just made me feel bad. Self-conscious about laughing or smiling. Deflated by a bad hair day. But more than anything, I’ve felt disappointed in myself that I can be troubled by an issue that is so damn superficial when, yes, I have much to be grateful for. I don’t value other people based on their appearance. Why can’t I extend that same courtesy to myself?

But I think it goes deeper than that. OCD disorders like body dysmorphia have strong ties to anxiety and depression. The obsessive checking and rituals around perceived issues are a channel for anxieties around much bigger things: like the fear of social exclusion, or illness, or dying, or other catastrophic, irreparable calamities—that the pandemic brought to all of our lives to a certain extent. It should be noted that BDD is a severe disorder with high rates of co-morbid depression, high rates of suicidal thoughts and suicidal attempts, and, in severe cases, a paralyzing fear of leaving the house. I do not have OCD or BDD, but I think the ties to anxiety are interesting.

“Most of us have aspects of our physical appearance that we don’t like, that we worry about. And that’s normal to being human,” says Weingarden. “So that experience of worrying about physical appearance, and even engaging in some of these ritual behaviors—we all do some of that to some extent. It can vary anywhere from very mild to full-blown BDD, and everything in between.”

If someone had offered to install a mirror in my computer so that I can stare at myself all day, I never would have agreed to it. Yet somehow that’s what I got. That’s what we’ve all got. Among the innumerable aspects of the pandemic that have been unnatural, add functioning under the constant surveillance of a virtual mirror.

Flow theory posits that people achieve peak performance when they are engrossed in an activity to the point that they lose their sense of self. It’s like being in the zone, or in a groove. For me the best feeling is when my self-awareness fades into the background and I am fully immersed in editing, or reading a good book, or listening to a friend’s story.

When I confided to a friend about my Zoom Appearance Crisis (ZAC!), she pointed out that Narcissus stared at himself all day every day and it didn’t work out so well for him. Sitting at the edge of a lake and engrossed in his own reflection, he ultimately lost all interest in his worldly surroundings and turned into a flower. Clearly, this is not an ideal picture of engagement with the world—much less baseline productivity.

But maybe we got the message from the myth all wrong. Maybe Narcissus didn’t expire because he loved looking at himself. Maybe he just couldn’t look away.