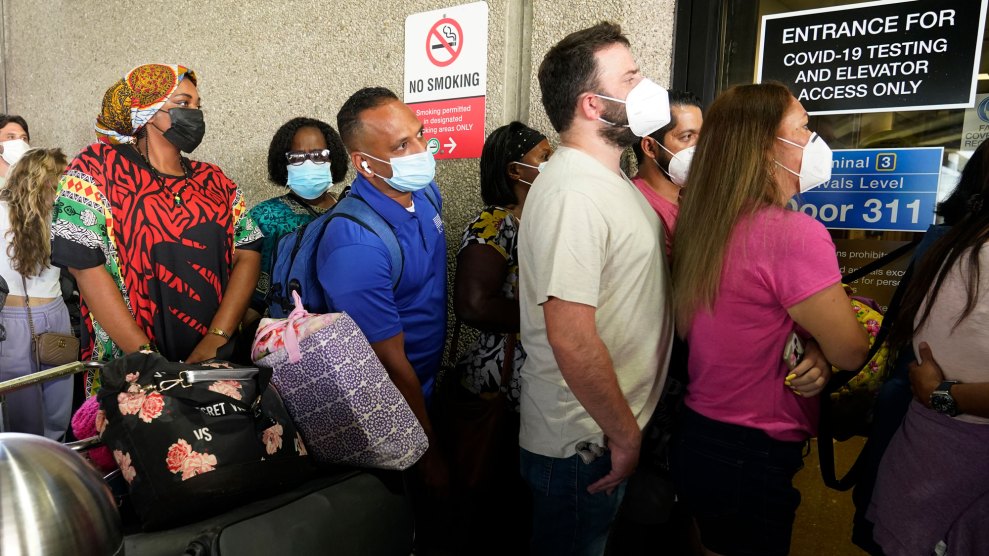 Passengers wait in a long line to get a COVID-19 test to travel overseas at Fort Lauderdale-Hollywood International Airport. Marta Lavandier/AP

In recent weeks, hospitals across the country have felt overwhelmed with the surge of coronavirus cases. On Saturday, Florida reported nearly 24,000 new cases, an all-time single-day record for the state. Meanwhile, in the last seven days, Louisiana, at 693 cases per 100,000 people, has the highest number of new cases per capita in the United States, followed by Florida (627) and Arkansas (502). Dr. Joe Kanter, the state’s top health officer, told the Associated Press that 1 percent of Louisiana’s population contracted COVID-19 in the past two weeks.

Zoom out, and one can see an even more troubling trend: When compared to other countries with populations over 1 million people in the last seven days, Louisiana is tied with Botswana for the highest daily case average per capita in the world—at 99 cases per 100,000 people, according to the New York Times‘ coronavirus case tracker for the United States and the world. Florida, meanwhile, is not far behind with a daily average of 90 per 100,000 people, ahead of nearby Cuba (81 per 100,000). “If Louisiana and Florida were countries, and not states, Louisiana would be the highest incidence country in the world and Florida would be the fourth one,” epidemiologist Michael Osterholm said on MSNBC last week.

If Louisiana was a country, it would be #2 on Earth in COVID cases per capita this week to Fiji. Florida not far behind. pic.twitter.com/xzfd48w1JU

The troubling surge comes as GOP governors like Florida’s Ron DeSantis and Texas’s Greg Abbott have imposed statewide bans on mask mandates in schools as their states’ hospitals grapple with the surge in COVID cases. In Louisiana, where just 37 percent of people are fully vaccinated, Democratic Gov. John Bel Edwards has reissued a statewide mask mandate, even as his Republican attorney general undermined it.

But some Republican lawmakers have shifted gears as their states suffered from the Delta variant. On Sunday, more than three months after he signed a law barring local mask mandates, Arkansas Gov. Asa Hutchinson said on CBS’s Face the Nation that his decision was an “error,” adding: “Facts change, and leaders have to adjust to the new facts and the reality of what you have to deal with.” And Louisiana Republican Sen. Bill Cassidy, a physician who contracted COVID, told CNN’s Dana Bash on State of the Union that he disagreed with DeSantis’s ban, noting: “When it comes to local conditions, if my hospital is full and my vaccination rate is low and the infection rate is going crazy, we should allow local officials to make those decisions best for their community.”