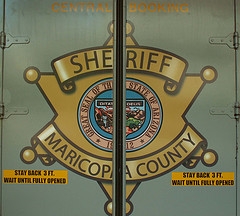 Once again, “America’s Toughest Sheriff” Joe Arpaio of Arizona’s Maricopa County showed the U.S. Justice Department who’s boss this week. In what the New York Times called an “angry, rambling outburst” at a press conference Tuesday, Arpaio vowed to continue his controversial immigration raids under the authority of state laws, even though Justice Department officials instructed his deputies to stop making immigration arrests in the field.

This blatant defiance of federal law is reminiscent of another American anti-federalist, George Wallace, the governor who famously blocked two black students from entering an Alabama State University auditorium in 1963, nearly ten years after Brown v. Board of Education. Wallace stood firmly against desegregation even after the federal government mandated it. Now, Arpaio seems to be taking a page from his playbook in matters related to immigration.

The statute currently in question is section 287(g) of the Immigration and Nationality Act, which enables local officials to enforce immigration laws with the approval of the Department of Homeland Security. Jennifer Allen of the Tucson-based Border Action Network explains that either party can opt out of the agreement, as DHS did partially earlier this week. So, she said, it is now illegal for Arpaio to continue his immigration raids without the approval of DHS. “There are no state-level laws that say you can set up a check point in a predominantly low-income Latino neighborhood and start pulling people over left and right for insignificant pretenses.”

But that’s just what Arpaio has promised to continue doing. At the press conference, he said that if ICE refused to deport immigrants his department deemed illegal, he would drive them to the border himself. Overt resistance to federal immigration laws is consistent with the sheriff’s previous DOJ dealings. In March, he declined to testify before a House Judiciary Committee probe into accusations that he uses racial profiling to make arrests.

“We know that segregation never really ended. But it is perpetuated and escalated here with another population,” says Allen of the Border Action Network. “Arpaio is the contemporary manifestation.” Rather than implement the law, Allen continues, Arpaio “has dedicated his resources to his political vendetta and racist agenda of trying to eradicate illegals from Maricopa County.”

And as Arpaio considers a run for governor in 2010, his resemblance to Wallace could grow even stronger.