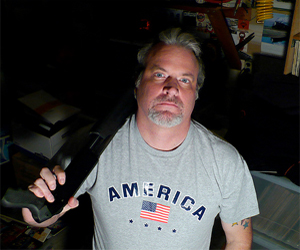 In an attempt to preserve all that they believe is great about a free and just America, Arizona has opened US culture to two words that previously were the exclusive province of Nazi Germany and the communist bloc: “Papers, please.”

You may have heard last week about Arizona’s latest bout of nostalgia for a never-was White America, in the form of a draconian “illegal immigration” law that effectively lets police stop anyone and haul them in if they can’t prove their Americanness on the spot. (Just a few months ago, MoJo exposed how Texas peace officers were using petty drinking misdemeanors to round up undesirables; Lone Star State cops must be jealous of Arizona now. No more red tape to cover your penchant for profiling!)

But guess what? Arizona’s got other new crazy laws! Just a week before criminalizing trips to the supermarket sans birth certificates, Arizona Gov. Jan Brewer signed a decree that empowers state residents to carry a concealed weapon with no license, no registration, and no questions asked. Exciting, right? But wait—there’s more! If your gun was made in Arizona, you don’t even need to submit to a federal background check to buy it.

The nice thing about concealed-carry permits—which most states have—is that they require the applicant to go through some sort of weapons training proving that they can, you know, not kill the wrong people with their lethal firearm. That had been the case in Arizona. But now, for citizens who opt to get the state’s now-pointless permit, “classes are no longer required to be a set number of hours or include any hands-on use of the weapon,” according to the Arizona Republic. What’s more: “Those who don’t get a permit would not be required to get any training or education.”

That’s so crazy, even gun enthusiasts are aghast. Ex-cop and firearms-safety instructor Dan Furbee says the law won’t just kill off his business—and that of every other weapons instructor in Arizona—but it could literally kill off Arizonans:

“I fully agree that we have a right to keep and bear arms,” Furbee said. “But if you are not responsible enough to take a class and learn the laws, you are worse than part of the problem.”

He said it’s not uncommon for students to walk into his classroom and pull a new gun out of a box with no idea how to hold it and no understanding of the laws surrounding it.

“If you are going to carry a concealed weapon, you should have some kind of training and show that you are at least competent to know how the gun works and be able to hit a target,” he said. “You owe the people around you a measure of responsibility.”

Furbee’s not alone. Another local sheriff told the AP he was concerned about twentysomethings who can’t legally rent a car, but can now stuff a Desert Eagle .50-cal down their cargo shorts. “I know a lot of 21-year-olds; the maturity level is gravely concerning sometimes,” he said, with a flair for understatement rarely evidenced among Arizona lawmen.

One wonders, too, what might happen when Arizona’s two new laws intersect: Somewhere, right now, a legal Arizonan with Latino features—maybe 10, maybe 10,000—is legally stuffing a pistol into his waistband. Perhaps that prospect will make police a little more circumspect about who they round up on the streets? We doubt it.

Anyway, as far as the Great Immigrant Roundup of ’10 goes, the Arizona law-enforcement establishment is already warming up: A Phoenix TV station last week told the story of a trucker—born in Fresno, California—who was detained at a weigh station under suspicion of being an illegal. Yes, he’s Latino, and as the video shows, he speaks heavily accented English. So the authorities apparently were unimpressed when he showed his driver’s license and recited his social security number. He was hauled in to the hoosegow, where his wife had to leave work and produce his California birth certificate to secure his release.

We shudder to think what will happen to Barack Obama if ever decides to take the family on a road trip through the Painted Desert.