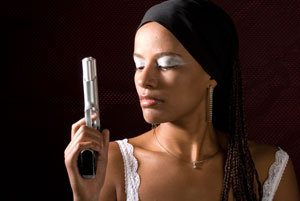 I’ve never held, owned, or even seen a real gun in person, save for the time one was pointed at me and my mom during a drive-by robbery when I was about six years old. So when I saw copies of The Politically Corrected Glossary at the 25th annual Gun Rights Policy Conference, I’ll admit I got nervous. Here’s an excerpt of the entry that did it:

Gun Bigot: A person who hates guns. Typically has little or no knowledge of guns, may never have even fired one, certainly doesn’t have any. Would gladly subject innocent people to defenselessness. An elitist.

It goes on, but here’s the kicker:

Striking similarity and disturbing parallels with the racial bigotry of the civil rights efforts since the 1960s.

What’s up with everyone from Glenn Beck to the anti-gun regulation fold trying to appropriate the Black Civil Rights movement for their ends? Alan Gottlieb, the head of the organization that built the conference, at one point said “if the gun rights movement is going to be successful it has to model itself after the Civil Rights movement.” Later at the conference, John Lott, the author of More Guns, Less Crime, argued that gun regulations are discriminatory because they prevent “poor black people” from being able to arm themselves.

An alarm automatically goes off in my head when I hear old white dudes arguing firearm regulations are “elitist” and leave poor black people defenseless, especially considering that black people are more likely than whites to be both the victims of gun violence and, sadly, the offenders (PDF). (Black people experience higher rates of overall violence than any other group). In effect, less gun regulations would lead to more black people shooting black people. So wouldn’t those who claim to have the welfare of black folks in mind actually want regulations to deter gun violence in this community? Also, besides me, only one other black person was spotted at this event which offered another source of skepticism at the advice offered. Where are the black pro-gun, anti-regulation advocates?

But reading The Politically Corrected Glossary did make me wonder: As a gun novice and one-time assault victim, do I have the right to critique gun owners, having never experienced firearms on a recreational level or for self-defense? After spending a total of 19 hours over one weekend with this crowd, some of whom have been shooting since age 14 or younger, I think I get it. Some are people who see shooting as a sport and want to have their guns. It’s the ones who want guns for self-defense I’m concerned with. You can read why here. Whether they see their gun as a hobby or a safety blanket, it doesn’t negate that guns should be heavily regulated—at least for the safety of the community at large, and definitely for the safety of the black community which many gun advocates voice so much concern for.