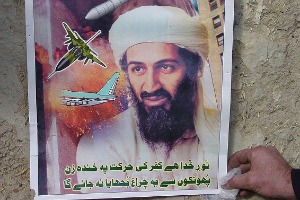 On Wednesday, the Ghailani trial was dominated by the story of an al Qaeda member who had flipped. L’Houssaine Kherchtou, a soft-spoken Moroccan in his mid-forties, took the stand to describe the terrorist organization’s training programs, its safe houses, its network of associates, and its military, financial, religious, and media structure.

For the first time in days, the federal courtroom in the Southern District of Manhattan was more than half full. A handful of journalists and the families of victims of the 1998 bombing of the US embassies in Kenya and Tanzania listened as Kherchtou spoke freely and informatively about noted figures in the Al Qaeda network, including Omar Abdel-Rahman (“the Blind Sheikh”), Ayman al-Zawahiri, Wadih el Hage, and above all, Osama bin Laden, who used Kherchtou as a pilot. He spoke about the complicity of Sudanese officials in letting al Qaeda men through customs (once with $10,000 or $20,000 in cash), the use of the relief organization Mercy International as a cover for forged travel documents, and the murders of two teenage brothers suspected of disloyalty to the organization. Khertchou’s detailed memory stood in stark contrast to the reluctant, often elusive, assertions of the Tanzanian witnesses who had recently testified that they could not remember much of what took place 12 years ago.

With Kherchtou, the prosecution further widened the scope of its case. The government’s focus started to expand two weeks ago when it called Tanzanian and American witnesses to the bombing of the Dar es Salaam compound. Last week, it moved on to the FBI’s investigation of the crime scene and its search for evidence and suspects including the defendant, Ghailani. In subsequent days, prosecutors described a web of alleged bombing associates in other countries, including Kenya. And finally, with Kherchtou, the focus turned to al Qaeda and to bin Laden’s failed attempt to organize in Sudan, his early efforts in Somalia, and his eventual move, along with many of his recruits, to Afghanistan in the ’90s.

Central to the day’s session was a brief and controversial video tape of bin Laden that the Ghailani defense team had tried repeatedly to have excluded for irrelevance. “The government hasn’t yet raised any evidence tying Ghailani to al Qaeda,” defense lawyer Michael Bacharach argued. Judge Lewis Kaplan explained his decision to allow in the tape—an ABC News broadcast from June 1998—in no uncertain terms: “The charges against the defendant stem from a conspiracy led by bin Laden. Nothing could be more relevant.”

With his decision, Kaplan, perhaps inadvertently, evoked a history that has quietly shadowed the events now playing out in this trial. Ten years ago, this very courthouse was the site of another embassy bombings case, in which four men were convicted. References to bin Laden and his growing leadership team were presented alongside the testimony of the witnesses themselves—it was, in fact, the American public’s first chance to learn about al Qaeda in depth. Then as now, the seats were filled with survivors of the bombings and families of the victims. Moreover, Kherchtou, was also a prime witness at the earlier trial. When he talked Wednesday, several observers referred to the fact that his testimony was merely a replay of his words 10 years ago. With one exception: When a question about al Qaeda’s refusal to help him get medical aid for his then-pregnant wife came up, Kherchtou broke down in tears.

The playing of the bin Laden tape was the perfect symbol of the intersection of past and present. Once again, bin Laden and Kherchtou explained the ideology of al Qaeda—its anger at the perceived American occupation of the Holy Land, and its call to arms against the United States. Yet the tape did not appear to do what the defense had feared, unfairly associating Ghailani with bin Laden. Nor did it seem to foreshadow what many of us expected of this trial, the easy conviction of another alleged co-conspirator in a crime that already had been tried a decade ago. Instead, the widening focus of the prosecution’s case seemed to take those of us in the courtroom further and further away from both the crime and the accused.

Perhaps this is the result of the government’s reversal of strategy. In the 2001 trial, the prosecution started with the larger world of bin Laden and al Qaeda and then narrowed their focus to Kenya and Tanzania and then to the bombing itself. But whatever the reason, in the current trial, the figure of Ghailani risks disappearing. His name barely came up in court today. When it did, it was when Khertchou said that he did not recognize Ghailani in a photo the prosecution showed him. It remains for the prosecution to refocus on the defendant in the days ahead as it presents its remaining witnesses.