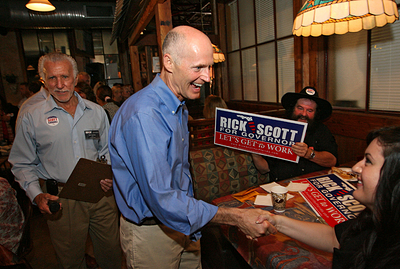 Florida voters hit the polls today in one of the most bruising, mud-drenched, and competitive gubernatorial races in recent years. In the past two months, the candidates—Democrat Alex Sink, the state’s chief financial officer, and Republican Rick Scott, a health-care executive and businessman—wasted few opportunities to assail each other. The candidates seized upon everything from allegations of insider trading involving Scott to the Sink’s use of text messaging from a campaign staffer during a televised debate, a violation of the debate’s rules turned mini-scandal dubbed “iCheat.” All that jabbing, though, failed to advance one candidate over the other; a Quinnipiac poll released on Monday showed Sink ahead by a single percentage point.

But when it came to slinging mud, Rick Scott’s background offered dirt aplenty. His record as founder and former CEO of Columbia/HCA, a massive hospital chain, and founder of Solantic, another chain of health clinics, dogged him throughout the race. So in case you’re just tuning in to the Sink-Scott showdown, here’s a look back at Scott’s controversial track record.

$1.7 Billion. That’s how much the federal government fined Columbia/HCA for Medicare and Medicaid fraud that took place under Rick Scott’s watch as CEO. That sum, which ultimately led to Scott’s ouster, set a record for the largest fine of its kind in history. To this day, he has yet to fully answer for his inability to spot and stop Columbia/HCA’s systemic overbilling. In a recent debate, Scott said only, “I made sure patients were taken care of. I really could have done a better job to hire more internal and external auditors.” And while Scott has previously blamed underlings, former Columbia/HCA accountant and FBI informant John Schilling doesn’t buy it: “I can’t say what he knew or didn’t know, but he should have known what was making up the majority of the revenues of the company,” he told the Palm Beach Post.

Overbilling, again? Just weeks before Florida’s GOP gubernatorial primary, pitting Scott against attorney general Bill McCollum, a pair of former doctors who worked for a chain of health clinics founded by Scott alleged improper Medicare billing by the company. One of the former doctors also claimed Solantic, in which Scott is a majority investor, used the their names and medical licenses without telling them to stay within Florida law, according to the Florida Independent, which broke the story in August. Scott’s campaign and Solantic both dismissed the allegations by the former doctors, saying they were merely a last-gasp effort by McCollum to boost his primary chances. Scott ended up winning the primary by 3 percentage points.

Public option enemy no. 1. As MoJo’s Nick Baumann reported last July, Scott spent $5 million of his own money to start Conservatives for Patients’ Rights, an organization aimed at defeating Democrats’ health care reform legislation. Ads cut by Scott’s group warned viewers that the new legislation “could put a bureaucrat in charge of your medical decisions, not you.” Nick reported:

Not everyone thinks that’s real change.

“What Rick Scott is doing is talking about protecting the status quo, which is bankrupting businesses and bankrupting families,” says Peter Harbage, a fellow at the Center for American Progress, which supports the public option. With so many groups—from the hospital industry to the pharmaceutical industry to Wal-Mart—coming together in support of reform, “it’s disappointing that [Scott] doesn’t want to be a constructive part of the conversation,” Harbage says.

Abortion distortion. On the campaign trail this year, Scott recounted the story of a lawsuit Columbia/HCA lost in 2003 after one of the chain’s hospital acted to save the life of a child born prematurely and with severe birth defects—against the family’s wishes. The tale was meant to burnish Scott’s pro-life cred and boost his standing with the anti-abortion crowd. But what Scott neglected to mention, as the St. Petersburg Times reported, was the life that child lived after the hospital chose to save her life—a decision her parents opposed:

Sidney is nearly 20 years old. She can’t walk, talk, or eat on her own. She suffers from cerebral palsy, brain damage, seizures, and blindness. She requires constant care at the Miller home in Sealy, Texas, west of Houston.

Sidney’s family, the Times reported, went on to sue the hospital where she was born for treating her without consent, seeking financial damages to cover the cost of her care; two years after her birth, the family’s insurance policy had already reached its $1 million limit. The Millers later won $43 million in court. “Our case had absolutely nothing to do with abortion, nothing to do with pro-life advocacy, nothing to do with right to life,” said Mark Miller, Sidney’s father. “Our case was about consent to treat, a fundamental expectation that all parents deserve.”

Debate dodger. Like all conservative candidates this election season, Scott has no tolerance for bailouts. Except, that is, for his own. Specifically Scott’s decision to bail out of several scheduled debates during the GOP primary race this summer and fall. In August, Scott ditched a debate hosted by the Boca Raton Republican Club; Scott’s campaign offered up his mother instead. A few weeks earlier, Scott ditched a debate against McCollum hosted by Leadership Florida and the Florida Press Association, and backed out of yet another duel with McCollum hosted by the Christian Family Coalition—even though, earlier that day, he’d given a standalone speech before the CFC. Perhaps if voters had known a bit more about Scott’s plans and positions, we might’ve seen a Sink-McCollum general election.

Rags-to-riches? To better connect with Florida voters—in 2009, he reported a net worth of $218 million; Florida’s median household income is $45,897—Scott has told of his own rags-to-riches story on the campaign trail. Which is partly true. But when Scott’s campaign specifically claims he “was raised in public housing,” it turns out that’s only partly the truth. Scott did, indeed, live in public housing in Urbana, Illinois—but for three years, starting when Scott was 3 or 4. “The way it’s presented is a little misleading,” Aubrey Jewett, a University of Central Florida political science professor, told the South Florida Sun-Sentinel. “It suggests he himself rose out of public housing to become a business success. That’s stretching it a little bit.”