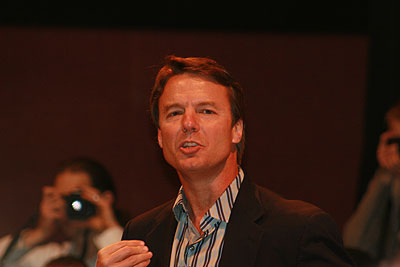 The long, embarrassing end to John Edwards‘ political career may have another chapter after all. Federal criminal investigators are probing whether Edwards, the 2008 presidential candidate and 2004 vice presidential nominee, used campaign cash to cover up his affair and child with Rielle Hunter, the Associated Press reports.

The crux of the investigation, in which a grand jury in North Carolina is currently poring over Edwards’ campaign records and testimony, concerns whether donations to Edwards-connected political groups were used to cover up Edwards’ affair with Hunter, and to keep Hunter and campaign aide Andrew Young out of the public eye so Edwards could run for White House. According to the AP, the case hinges on whether that cover-up should be considered campaign donations or not, which would violate campaign finance law.

Revelations of Edwards’ affair were first reported by the National Enquirer in July 2008, after Edwards has been knocked out of the presidential race but was still eying the vice presidential nomination. It wasn’t until later that fall that the former North Carolina senator admitted that he’d lied as a presidential candidate about his affair with Hunter. Yet at the time he denied paying hush money to Hunter to keep her quiet.

A slew of Edwards-connected groups are included on a subpoena for the latest investigation, according to the AP. That includes Alliance for a New America, a 527 political group, and two of Edwards’ political action committees—New American Optimists, which was created after Edwards’ 2000 Senate victory, and the One America Committee.

Here’s more from the AP:

Several people interviewed by investigators said the questions focused on Edwards’ knowledge of campaign finance law, going as far back as whether he used his Senate office to conduct political business in violation of congressional rules. Subpoenas issued in the case request e-mails, records and other material related to more than two dozen individuals and organizations connected to Edwards and his allies throughout his political career…

A person involved in the investigation and who is familiar with the financial transactions told AP that Baldick provided Young about a $30,000 raise to move off the Edwards campaign payroll onto one of Baldick’s private organizations around the time Young began taking care of a pregnant Hunter in fall 2007, when the primary campaign was heating up. Young also got more than $150,000 as commission for money he raised for Alliance for a New America. A month after Young got his last campaign paycheck on Nov. 14, 2007, he publicly claimed paternity of Hunter’s child.

Young has long since renounced his paternity claim and broken with Edwards. In a book, “The Politician,” Young said he was covering up Edwards’ fatherhood of the child. Edwards admitted paternity last year.