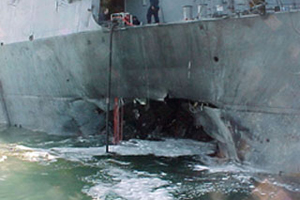 The New York Times‘ Charlie Savage reports that with the midterms in the rearview mirror, the Obama administration is once again firing up the Guantanamo Bay military commissions:

Charges would probably then come within weeks against one or more detainees who have already been designated by the Justice Department for prosecution before a military commission, including Abd al-Rahim al-Nashiri, a Saudi accused of planning the 2000 bombing of the American destroyer Cole in Yemen; Ahmed al-Darbi, a Saudi accused of plotting, in an operation that never came to fruition, to attack oil tankers in the Straits of Hormuz; and Obaydullah, an Afghan accused of concealing bombs.

All three men are among the thirty-plus detainees the Obama administration has decided can be tried. As the task force recommended, the administration also plans to continue holding nearly 50 other detainees indefinitely without charge or trial.

These latest plans appear to represent a full-on embrace of the commissions process by the Obama administration. Any charges against al-Nashiri, al-Darbi, and Obaydullah would be the first brought since Obama was inaugurated. Nashiri, if tried, would be the first so-called “high-value detainee” to face the military commissions, the first Gitmo detainee to face the death penalty in a military commission trial (17 US military personnel were killed in the Cole attack), and the first confirmed subject of waterboarding to face trial.

As Savage notes, part of what would be at stake in a al-Nashiri trial is the very definition of the war on terror. The Cole bombing happened in 2000, before the September 11, 2001 attacks and the subsequent Authorization for the Use of Military Force (AUMF). That would seem to present a problem for prosecuting Nashiri for war crimes: how could he have committed war crimes if we were not at war?

The Clinton, and later Bush administrations, didn’t initially treat the Cole bombing as a wartime attack when it happened. In fact, both administrations considered the Cole bombing a “peacetime terrorism crime.” The FBI was sent to investigate, the commanding officer of the ship was investigated for his compliance with peacetime rules, and sailors who committed conspicuous acts of courage and heroism during the attack were deemed ineligible for combat-related medals. The attack on the Cole is one of the only major terrorist attacks on a US target in modern history that the US never retaliated for militarily.

Now the Obama administration claims that we were actually in an armed conflict with Al Qaeda since 1996, when Osama bin Laden issued his declaration of war against the United States. The administration seems to believe that this allows it to properly prosecute Nashiri for war crimes—if we weren’t at war, he’d theoretically have to be prosecuted in federal court.

Even if you buy the argument that we’ve been at war since 1996, it’s still hard to accuse al-Nashiri of a war crime under a traditional law of war framework. In naval warfare, approaching the enemy in disguise is what’s considered a “permissable ruse.” If you’ve ever read any novels about 17th- and 18th-century naval combat, you’ll know that it happened all the time. Moreover, the Cole was indisputably a military target. If we were at war, it’s hard to see how attacking a warship is a war crime. Either way you slice it, the government comes out looking silly.

But that’s beside the point. The military commissions are the product of politics, and (barring an unprecedented court ruling), there’s no way for anyone to force the US government to comply with law of war tradition or international precedent. Congress has decided that things like conspiracy, material support for terrorism (which can be as simple as giving someone a cell phone), and even “murder in violation of the laws of war” can be war crimes—making just about anything an Al Qaeda or Taliban belligerent does a “war crime.”

The new American understanding of the law of war isn’t consistent or logical or even necessarily coherent. But the Military Commissions Act made it the law of the land. Let’s hope that the next time we’re in a shooting war with an actual nation-state, that country doesn’t decide to point to the military commissions as precedent and start trying American GIs for “murder in violation of the laws of war.” That would be bad.

UPDATE: The American Civil Liberties Union’s blog has a useful post on a potential al-Nashiri trial. It offers a good summary of how he was interrogated:

U.S. officials waterboarded al-Nashiri. They bent him over backwards in a stress position until one of his interrogators worried that his arms would become dislocated. He was naked, hooded, shackled, and deprived of sleep. His “debriefers” blew smoke in his face, stood on his ankle shackles, and scrubbed his naked body with a stiff wire brush. His torturers hung him from the ceiling by his arms, while they were tied behind his back. And if these medieval torments were not enough to render a subsequent capital trial problematic, his torturers also revved a power drill next to his naked, hooded body. And racked a handgun near his head. “Once or twice“.

None of this makes al-Nashiri innocent. But it would present serious problems for a federal court trial, and the military commissions are a way to get around that.