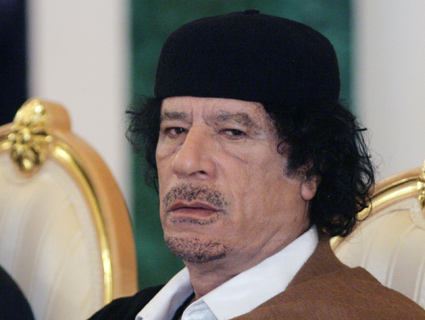 “The evidence shows that Muammar Qaddafi personally ordered attacks on unarmed Libyan civilians,” Ocampo said in a press conference in The Hague a couple hours ago. “His forces attacked Libyan civilians in their homes and in the public space, shot demonstrators with live ammunition, used heavy weaponry against participants in funeral processions, and placed snipers to kill those leaving mosques after the prayers.” Therefore, “the prosecution has applied to Pre-Trial Chamber I for the issuance of arrest warrants” against the three Libyan officials the court found to be most responsible.

What does that mean, exactly? Now, the judges can accept the warrant request, reject it, or ask for more evidence. Though this has, in the past, taken months, a source at the court speculated that the ICC could decide on Ocampo’s request within weeks. If the warrants are issued, the ICC has no power to enforce them; today Ocampo called on Libyan forces to make the arrests. (Libya is a member of the UN, the UN referred this case to the ICC in Resolution 1970, and Libyans will have the duty to take care of business, he explained.) “Libyans can implement the arrest warrants,” Ocampo said, “and I think they will do it.”

In the meantime, the Libya investigation continues. ICC investigators—who collected the evidence for this warrant request in a fairly awesome process—are still looking into allegations of attacks on Africans wrongly perceived to be mercenaries and war crimes committed by Libyan parties outside the government. Ocampo has also vowed to investigate allegations of widespread sexual violence. Witnesses have said, for example, that rebels are finding Viagra on Libyan soldiers, who are using it as a gang-rape aid.

For security (of the witnesses; the ICC doesn’t have a witness protection program), investigators are not allowed to interview anyone who hasn’t yet fled Libya. Still, heinous allegations continue to pile up. Though the witnesses are afraid for themselves and their families, one of the investigators told me, they are very enthusiastic about cooperating. “People have a lot of hope, and are waiting to see what happens from our side,” he said. “They’re looking forward to getting some results.” Historically, the ICC has had an uneven track record of bringing war criminals to justice, but to the witnesses, the fact that anyone’s even examining the evidence is a step in the right direction. “There have been in Libya no investigations for a long time,” the investigator said. “And there have been a lot of crimes. So this is a big change.”