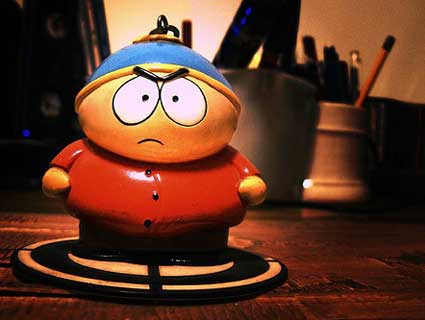 In a 2005 South Park episode, Eric Cartman—the show’s fat, whiny, spoiled antihero—sets off an anti-redhead movement in his Colorado elementary school. “Gingers,” he says, are soulless, inferior beings that should be shunned. The episode’s satiric take on bigotry was lost on some: in 2008, it inspired a 14-year-old British Columbia boy to launch a Facebook group declaring November 20, 2008, “Kick-a-Ginger Day,” and sparking redhead bullying nationwide. A year later, ten North Maple Middle School students in Collier County, Florida, revised the holiday—they held “Kick-a-Jew Day” in its stead. At least one student was kicked and reported the attack to school authorities.

The incident has since sparked a lawsuit against the Collier County school district by the local chapter of the ACLU, which wants the district to reveal how it disciplined the students involved in the incident. Last week, that effort finally got a go-ahead…. with caveats. Collier County Judge Hugh Hayes denied the school district’s motion to dismiss the suit, but also asked both sides to do a little rethinking and rewriting.

The Backstory: Six days after “Kick-a-Jew Day” in 2009, Collier County’s ACLU chapter requested records from the school district describing details of the incident. They never got them. So nearly two years later the group filed a lawsuit, alleging that the school failed to comply with the ACLU’s repeated document requests—and that, under the state’s Public Records Act, it should have to.

The School Board disagrees. Under the Family Educational Rights and Privacy Act (FERPA), schools can’t release “personally identifiable information in student education records” without written consent from the student or parent. That’s why, though the school did provide some documents to the ACLU initially, they didn’t turn over any that actually described “Kick-a-Jew Day,” or what was done to discipline the kids involved.

The district isn’t budging, even though the ACLU asked, twice, to simply receive the disciplinary records with all identifying information redacted. “We are not interested in who the students are,” Douglas Wilson—president of Collier County’s ACLU—told The Naples News. “We are interested in how the district handled this incident.”

The judge’s ruling last Wednesday was a step forward—but the extra work he’s requested is substantial; Collier County has to file a new motion asking for a more definitive document request from the ACLU, and the organization will then have 30 days to churn one out. The requested edits could draw out the case even further.

Even so, this is a judicial step worth noting. “Kick-a-Jew Day” might look like just a naïve response to popular media. But as cultural memes grow pricklier, and kids hear about them at younger ages, there could certainly be more such unfortunate misunderstandings—even in the most open-minded of environments. It’s good that this court is taking this case seriously. If we have a bunch of Jew- and “ginger”-kicking incidents in our future, we should have a public discussion—in court, if necessary—about how to punish the perpetrators and protect the victims.