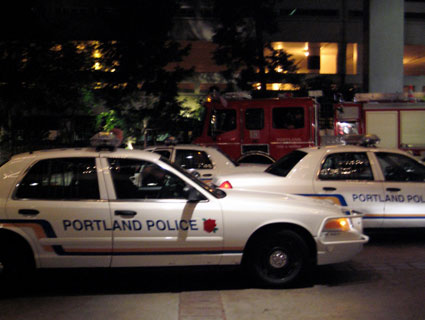 On September 17, 2006, Portland police officers saw a man behaving abnormally in the city’s trendy Pearl district. The man was James Chasse, a 42-year-old with schizophrenia. Three officers, who thought the Chasse might be a junkie or was urinating on the street, pursued him. Upon catching up with Chasse, the officers Tasered him, kicked him, and one officer slammed him onto the ground, puncturing Chasse’s left lung and fracturing 16 ribs. After a failed attempt to book Chasse in a Portland, Oregon jail, the police decided to take Chasse to the hospital. He died on the way. Four years later, the Portland police admitted that the officers involved should not have gone after Chasse in the first place.

Deaths like Chasse’s have prompted the Department of Justice to investigate the Portland Police Bureau to determine whether or not excessive force has indeed become a “pattern or practice.” The investigation, launched yesterday, will pay specific attention to cases surrounding individuals with mental illnesses. Assistant Attorney General of the Civil Rights Division, Thomas E. Perez, said at a press conference in Portland yesterday, “We’re not here to fix the blame, we’re here to fix the problem.” The investigation will first probe the police bureau itself then proceed to interviews with community leaders.

Although Chasse’s death created a visceral response in the local community, there have been many other similar cases. Jack Dale Collins, for example, was a 58-year-old homeless man who was fatally shot four times in March 2010 by Portland police officers after he came out of a restroom covered in blood and holding an Xacto knife.

Then there was Darrel Dwayne Ferguson, a 45-year-old man with HIV, who was killed in December 2010 after being shot several times. Ferguson had allegedly threatened a neighbor with a handgun before the police showed up. He pointed an air pistol at police officers when he answered the police officers’ knocks on the door.

Several of the men shot by Portland police officers had been homeless residents of the city. Portland has been focused on tackling its homeless problem for years. In 2004, the city launched a 10-Year Plan to End Homelessness. According to city officials, Portland has kept 7,000 people off the street by both relocating homeless residents into homes and preventing people from losing their homes. The last documented count of homeless residents found that there were 1,591 on Portland’s streets.

Race is also at the center of the issue. The number of African-American victims has led many in the community to call for justice. The most infamous case came in January of last year, when Aaron Campbell, a 25-year-old African-American man, was shot and killed by Portland police officers. The officers involved claimed they believed that Campbell was reaching for a gun at the time he was shot. Campbell was in fact unarmed. To make matters worse for Campbell’s family, police officers later told his mom that her son had killed himself. The officer who killed Campbell, Ronald Frashour, was fired from the police force but was “cleared of criminal wrongdoing” by a Portland-area judge.

The DOJ’s investigation might be the best opportunity that the city of Portland has to see a change in police practices – and in outcomes for its citizens.