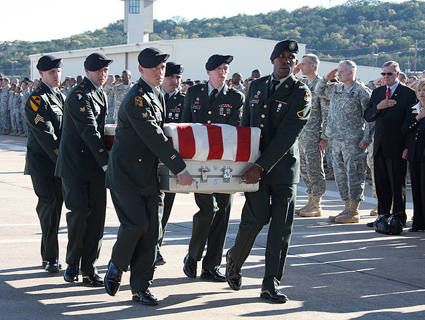 Nidal Malik Hasan, the Army major accused of killing 13 and wounding 32 in the 2009 shooting rampage at Ft. Hood, is on his way to a court-martial that could sentence him to death. But in a break with military custom, the Army won’t release the critical report that convinced authorities to indict Hasan for capital murder. It’s a decision that has some reporters wondering what the service doesn’t want them to see.

Sig Christenson, a military writer for the San Antonio Express-News who has covered the Hasan case from the start, says the Army is acting fishy. “Sometimes, the military as an institution fights harder to do as it pleases than it does to preserve your First Amendment rights,” he writes. Christenson is an officer of Military Reporters and Editors, which supports journalists who cover defense affairs, and he’s asked the group’s attorney to provide a legal opinion on whether the Army’s violating open-records rules. (Full disclosure: I am a MRE board member.) Other major media organizations are expected to sign on to a letter demanding the Army explain why it’s keeping the report under wraps. “You cannot condition access to the courts,” he states. It’s not the first roadblock Army authorities have thrown in front of reporters covering the Hasan case: Journalists say that at one point, they were told not to ask prosecutors certain questions, or else they’d face expulsion from the court.

But the phantom report is a new twist. Army prosecutors held an indictment hearing against Hasan last year, known in military parlance as an “Article 32” investigation. The hearing, called “chilling” by observers, was open to the public, and the case against Hasan seemed straightforward, according to retired Army lawyer Geoffrey Corn, who observed the proceedings. Fifty-six government witnesses testified that they were shot at by Hasan or saw him shooting at others. Prosecutors rolled out the autopsies of the 13 dead victims; they detailed how many spent bullet casings were found at the scene (146) and how many unused bullets were found in Hasan’s possession (177). Within weeks, the judge, Colonel James Pohl, issued a final Article 32 report ruling that Hasan should be tried for capital murder.

But the Army has repeatedly refused to reveal the contents of Pohl’s report. That’s highly unusual in military justice circles. The Army “has released Article 32 investigating officer reports in the past, sometimes even before the commander had opted on a course of action, and that made sense,” Christenson writes. It’s normally a routine step: “[T]he investigating officer’s sole mission was to tell the commander if there is enough evidence in the case to justify taking it to a judge and jury.”

Why, then, wouldn’t the Army release its full dossier on Hasan? It’s possible there’s some new, revelatory terrorism-related information in the report that didn’t make it into the indictment hearing. There wasn’t, for instance, much courtroom discussion about the numerous emails Hasan exchanged with Anwar al-Awlaki, a US-born cleric and member of Al Qaeda who has been marked for death by the federal government. In all, Army investigators reportedly amassed hundreds of thousands of pages in evidence, 123,000 of which were provided to Hasan’s defense team and little of which made it into the court.

On the other hand, there could be nothing new in the report, making it all the less clear why the Army’s not hewing to its usual public-records practices. “When the report is released, I’ll wager there are no stunning revelations in it. Certainly, it will contain no classified information. People will wonder what the fuss was all about, just why Fort Hood went to so much trouble to keep the document secret,” Christenson writes. “That’s especially so in a case with such public interest, but again, we’re talking about the Army.”