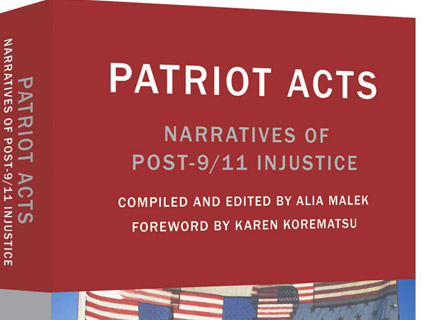 As the 10th Anniversary of the 9/11 attacks arrives, we will rightfully hear much from the families of the victims and others whose lives were directly affected by the events of that day. But it’s also important to reflect on the stories of those whose lives were changed by the attacks in the days, months, and years that followed. Patriot Acts, compiled and edited by Alia Malek, a civil rights lawyer and advocate for American Muslims, contains a series of particularly moving reflections. Published by Voice of Witness, a non-profit human rights organization founded by author Dave Eggers, Patriot Acts translates a collection of oral histories into a cohesive and digestible book.

Malek, a former lawyer for the Department of Justice’s Civil Rights Division, writes in the introduction, “What I saw happen in this country after 9/11, initially from my perch as a lawyer, made quite clear for me that our ignorance of the American lives and experiences of certain groups had facilitated a backlash and a slide into xenophobic and nativist behavior that betrayed the very values I had joined the DOJ to protect.”

Malek included the story of Adama Bah, a Muslim woman who had immigrated to New York City from New Guinea as a child. In 2003, the federal government arrested Bah on suspicions that she was a suicide bomber and initiated deportation proceedings. The government has yet to explain or give evidence as to why they suspected that Bah was a terrorist. The day of her arrest, Bah had an epiphany: “I didn’t know I wasn’t American until I was sixteen and in handcuffs.” During her incarceration, Bah experienced a particularly invasive check for weapons that left her devastated. “I sat at the corner of the shower and held myself and cried. I was thinking, I cannot believe what I just went through.” She spent six weeks locked up at a New York area juvenile detention center before being released. At her release, Bah says that an officer at the detention center shouted at her, “Arrest that fucking nigger terrorist.” Bah spent another three years under house arrest before eventually receiving asylum, allowing her to stay in America because of the likelihood of her suffering genital mutilation in her home country.

Also included is the story of Nick George, a 23-year-old computer programmer who was detained for having Arabic language flashcards with him at the Philadelphia International Airport. During a routine security screening, a TSA officer stopped George. “Okay, you obviously read,” she said. “You know who did 9/11?”

She retorted, “Yeah, you know what language he spoke, right?”

After hours of detainment, FBI agents appeared. When George told them he didn’t understand why he had been arrested, the FBI agents said, “Well then, you’re a fucking idiot. Do you need me to get the flashcards?” According to George, they asked him if he “was an ‘Islamic.'” Eventually, they released him. Upon his release, George and his family notified local media and sued the TSA with the help of the ACLU. George says, “It would make a lot more sense to be encouraging Arabic speakers, rather than treating them like criminals, you know…it’s crazy to have this incredibly paranoid and suspicious attitude toward someone learning Arabic.”

Then there’s the tale of Shaheena Parveen, the mother of would-be terrorist Matin Siraj, a man who was convicted for plotting to bomb New York’s Herald Square subway station. Key to the operation was one of the FBI’s more than 15,000 informants. Parveen leads us through her and her son’s experience in a way we rarely see: she describes the moment her son first met the informant, Osama Eldawoody, to the moment he was arrested. Siraj’s case was, like many covered in our investigation into the FBI’s use of informants in Muslim communities, one in which the FBI informant played an integral role in the plot. Siraj was sentenced to 23 years in prison. Like many Muslims in America, Parveen remains terrified of the authorities. “They [FBI] can say anything and people would be ready to believe it, and the media would be ready to broadcast it.” But mostly, like any mother, Parveen aches to see her son. “Twenty-three years is a very long time to wait for my son’s release. My life is passing away. When will he return, when shall I cast my eyes upon him?”

At a time when America is reflecting on years that have passed since September 11, 2001, Patriot Acts offers an opportunity to explore the dark side of our country’s response to the attacks. The strong voices contained in this collection offer first-hand insight into experiences of injustice often overlooked in post-9/11 media coverage.